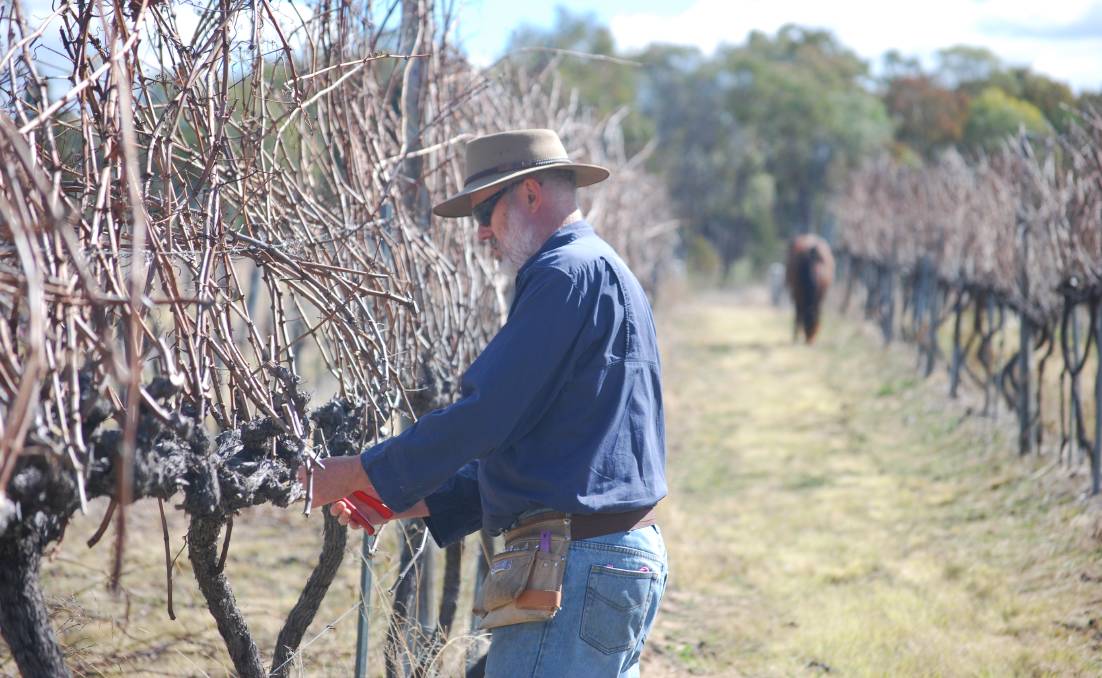 Winemaker Tim Coelli says the viticulture sector is the 'canary in the coalmine' in relation to climate change and its impact on agriculture.

The wine industry is one of the most exposed sectors of agriculture to pressures due to climate change.

The majority of farmers I know would argue that "droughts come and droughts go" and that this current "climate change hysteria" is well meaning but misguided.

I understand this. I am a fourth-generation farmer.

My great grandfather was a grape grower in Italy who emigrated to Australia in the 1860s and became a wheat/sheep farmer.

Farmers in Australia have seen droughts and bushfires and heatwaves and floods for hundreds of years, so I understand their reluctance to accept the dire warnings of the expert scientists.

Yet conversely, in the viticulture sector many growers do accept that the climate is changing and is changing significantly and rapidly.

Because as Professor Snow Barlow and many others have noted, our vineyards are the "canary in the coal mine" for agriculture as a whole.

Staggeringly, in some cases by as much as 40 days over the past few decades.

A 2016 Australian Wine Research Institute (AWRI) report by Paul Petrie and Victor Sadras is one of many studies looking at this issue.

In their figure below they plot 20 years of grape maturity data (1995-2014) from the McLaren Vale vineyards of a large Australian wine company.

The data shows that grapes have been maturing at a rapidly increasing rate over the past two decades, with red grapes (Shiraz and Cabernet Sauvignon) reaching a sugar content of 12 degrees Baume approximately two days earlier each year. 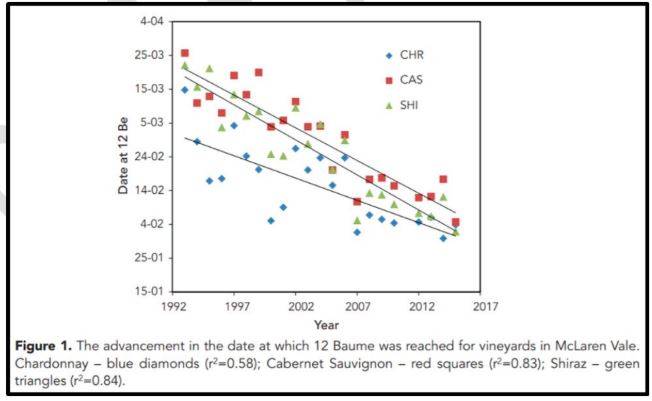 Wine grape maturation times are becoming earlier as a result of hotter summers.

In the space of just 20 years harvest dates have come back by roughly 40 days.

That is, instead of harvesting red grapes at the end of March or early April, a harvest in mid-February is now not uncommon. This is astounding.

The impact on winery costs is also significant.

Conducting red wine ferments in the heat of summer instead of autumn means extra costs for refrigeration, both in terms of extra equipment and electricity.

The vintage is also being "compressed" with red grapes now coming into the winery before the white grape ferments have been finished, requiring extra investment in tank capacities and other additional infrastructure costs.

In Australian vineyards there is currently a scramble to adapt to our rapidly changing climate.

There is strong interest in replanting with alternative grape varieties that are more heat and drought tolerant, such as those grown in the hotter Mediterranean regions in Italy and Spain.

Scientists have also developed chemical "sunscreen" that is sprayed on grapes to reduce the impact of sunburn, while others are using sprinklers to mitigate grape heat stress in times of excessive temperatures.

We are also seeing somewhat of a migration of the industry as wine makers increasingly look towards cool climate regions such as Tasmania.

These activities did not start just recently, many have been going on for a decade or more.

We have also seen a fundamental shift in the way wine can be made, to allow wine makers to manage the problem of rising alcohol levels in wine due to the high sugar levels in the grapes.

Two years ago Australian winemaking regulations were altered to allow wineries to add water to their ferments in certain situations.

This is because in some regions the hotter weather has made the sugar contents of grapes much too high, leading to unbalanced wines with high alcohol contents of 15 to 16 percent or more.

The "canary" is not just appearing in Australian vineyards, but all over the world.

National Geographic reports that in Burgundy, researchers have used data from a 700-year-long record of harvest dates to show that grapes are now harvested almost two weeks before their historical norm.

deal with the impacts of climate change.

The wine industry in Australia is up front about the challenges we face. Wine Australia does not mince words when it states: "Climate change is already impacting the grape and wine community, as evidenced by changes in grape phenology and harvest dates, which has led to compressed harvests and greater pressure on vineyard and winery infrastructure".

"Vulnerability to the impacts of climate change varies along the value chain, with the vineyard being the most vulnerable."

The wine industry is working hard on adaption to climate change, but this is not enough.

Our political leaders should also be working hard on climate change mitigation.

They must listen to the scientists and economists and fire chiefs and establish bipartisan policies which actually produce serious reductions in greenhouse gases and provide stable investment signals for our business sector.

These policies need not be costly and in fact can be of significant benefit to many Australians, especially regional communities.

Eminent economist Professor Ross Garnaut lays out a clear path for Australia in his new book Superpower: Australia's Low-Carbon Opportunity, showing that if we play it smart we can seize the opportunities adapting to climate change can present.

If these are grasped Prof Garnaut argues that "Rural and provincial Australia will be the engine room of the superpower of the low-carbon world economy".

Perhaps it is time for us to take a positive approach to dealing with what is going to be the major challenge for our regional economy in years to come.

The story The wine industry is the "canary in the coal mine" first appeared on Farm Online.