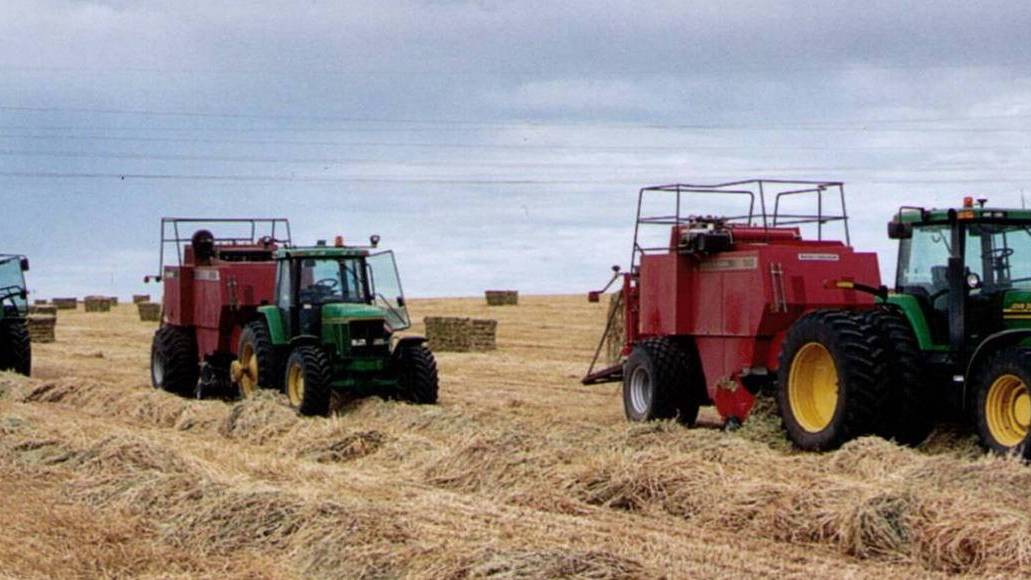 Hay continues to make its way from Victoria to Queensland and industry is warning that supplies will be harder to source come autumn.

PRIVATE fodder industry analysts have backed up the findings of the Australian Fodder Industry Association (AFIA) that the nation is chewing through fodder reserves at a rapid rate and that it will be tough to source supplies by autumn.

A steady stream of trucks is moving up and down the Newell Highway, taking hay from the main source, Victoria, to the main points of demand in northern NSW and southern Queensland.

Colin Peace, director of Jumbuk Ag, said while there had been good production in Victoria, the rate of hay moving north to Queensland was on par with some of the highest levels throughout the drought.

"There will always be some hay about, but at the rate it is being used we are going to run out of readily available reserves for northern users sooner rather than later."

Mr Peace said the key consideration for the industry was the timing of a break in the season in the north.

"There was some false hope when parts of the New England received up to 75mm before Christmas, but now we are seeing a change in the weather patterns, with the IOD (Indian Ocean Dipole) positive breaking down so there is a chance for reasonable late summer rain in the north," he said.

"Realistically, graziers in these areas will not want to see pastures trying to establish in the middle of the heat so they will be hoping for late summer / early autumn rain."

"I would say stocks will be running reasonably tight by the middle of autumn at the latest, even if we did get a really strong summer rain period in the north, as it will take time for pastures to establish." Stacks of hay in paddocks are becoming an increasingly rare sight with most of Victoria's hay supplies now moved into sheds.

"Buyers are particularly interested in vetch or other protein hays, but whatever you have got you will be able to sell, it is moving very easily, there is even a reasonable call for straw," Mr Schnaars said.

"Most of the hay in this area is now shedded, there isn't too much out in the paddock, and the producers are just dripping a bit into the market according to access to freight, there are good supplies but there is more than enough demand to match that."

Mr Peace said prices were around $300-330 a tonne for protein hay, $250/t for cereal hay and $100-120/t for cereal straw in the Victorian Wimmera/Mallee, with freight costs of between $150-200/t to move the hay to northern NSW and southern Queensland, although the freight component is assisted with subsidies.

While there was a lot of fodder made in western Victoria and south-east South Australia, he said the nature of fodder making in this region meant it was basically impossible to freight long distances.

"Much of the hay in the Western District in Victoria is still done in round bales which means it would be economic suicide to try and move it into Queensland," Mr Peace said.

"The supplies in the south-west will meet local demand and maybe move into fire-hit regions in eastern Victoria, but they will not be the answer to northern feeders wanting supplies."

Feedlotters capable of formulating rations will be able to utilise cereal hay.

Andrew Weidemann, Grain Producers Australia (GPA) chairman and farmer in the Wimmera said many farmers in his area were taking the opportunity to bale straw to make for easier sowing next season.

"There were some fairly heavy stubbles out there and with the prices of straw you can afford to get a contractor in and have the straw baled, the stubbles tidied up and maybe make a little bit of cash," Mr Weidemann said.

He said for those with their own hay making equipment it could represent a reasonable income source.

"The stubbles are doing around 4 tonne a hectare of straw, so there is some money in it."

Mr Schnaars said he had been surprised at how easily the straw was selling.

"We were worried it might just sit around, but there seems to be a steady demand for it."

In terms of ongoing demand, Mr Peace said those that had kept livestock were now looking towards the end of the drought.

"Everyone wants to have as many stock as possible on when the drought breaks, it is not necessarily logical, but people are saying that after three droughts this season has to be better."

He said this was reflected in kill rates, which have come back.

"If we don't see any summer or early autumn rain these rates could well increase, but for now everyone is just trying to forecast what happens in the late summer."