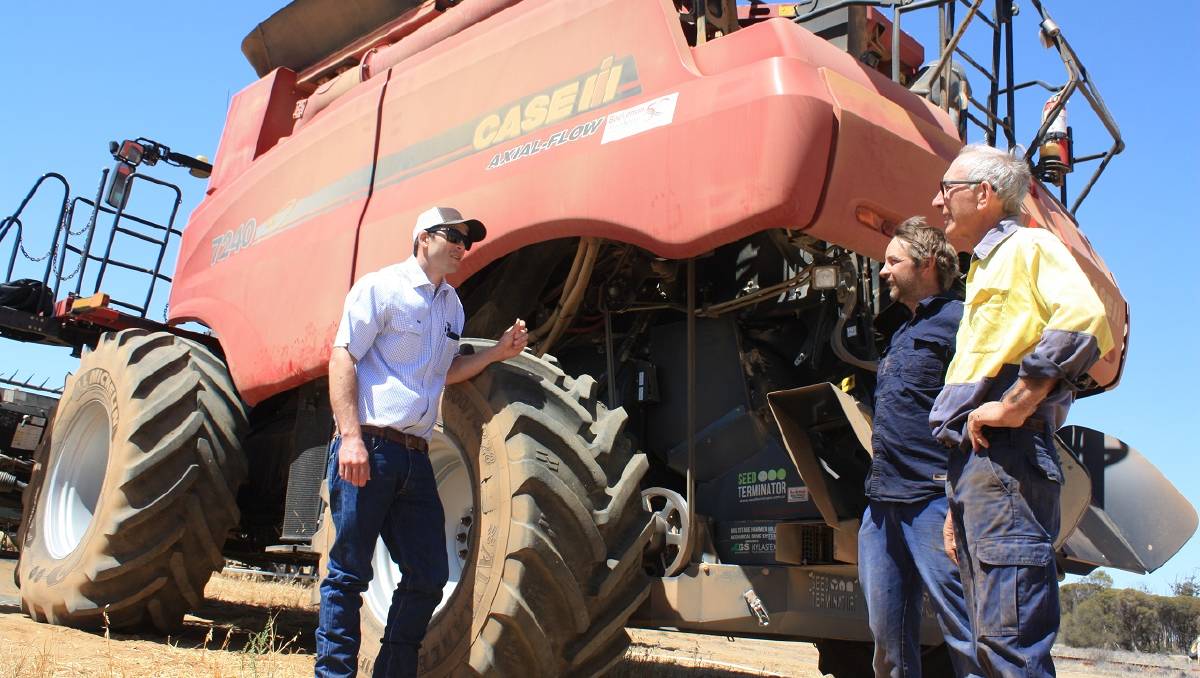 WA Seed Terminator representative Joe Limbaugh (left) chats with east Wubin farmers Boyd and Keith Carter during last year's harvest about the performance of the Seed Terminator on this Case IH 7240. The Carters also have another unit installed in their John Deere S680 header.

It has offered significant discounts on its model year 20 Seed Terminators with the first tranche of discounts completed last month.

The second tranche of discounts ends next Friday with the company's WA representative Joe Limbaugh confident of a strong uptake.

"We have more than 100 units in operation in WA during the 2019 harvest and the feedback has been very positive, "Mr Limbaugh said.

"Brett comes to us with a great wealth of both harvester setup and technical training knowledge," Mr Limbaugh said.

"With Brett's vast knowledge gained from his time spent at Boekeman Machinery and Westrac, he will be filling the role of Seed Terminator dealer educator and continuous improvement engineer, providing the dealer groups with technical in-field and classroom training and dealer technical assistance."

According to Mr Limbaugh, the Seed Terminator incorporates a 100 per cent mechanical drive system that is driven by the harvester engine, with minimal moving parts, incorporating only shafts, belts and a gearbox.

Recently, Case IH teamed up with Seed Terminator to incorporate a factory-design drive.

The patented magnet tray composed of rare earth magnets, reduces the chances of ferrous objects being ingested by the mill sets.

"The three-stage hammer mill gives you the reassurance of a 98 per cent kill on ryegrass with other weed kill rates up to 100pc and Seed Terminator kills no matter the moisture level or mill speeds (between 2500 and 3000rpm)," Mr Limbaugh said.

"The mill set will totally devitalise volunteers (100pc) at 1500rpm whereas other mills have to operate at 3000rpm to achieve the same result.

"And the Seed Terminator has the ability to spread the chaff fraction the full-cut width, improving potassium value in the soil, which can be worth between four and five dollars a tonne of grain, dependent on the crop type."

According to Mr Limbaugh, a big part of the company's focus in WA is to stay connected with the market by speaking with owners and dealers regarding the product line and how it fits in with harvest operations.

"We're now honing in on our cost per hectare, and that is being achieved by cost efficient production," he said.

"For example, we've lowered the cost of a set of new screens by $2300 while making them 60pc thicker.

"The 2020 models also include new hardened steel flails which have been precision-machined out of specially-sourced Australian steel.

"And the rotor is coated with tungsten carbide to prolong wear life."