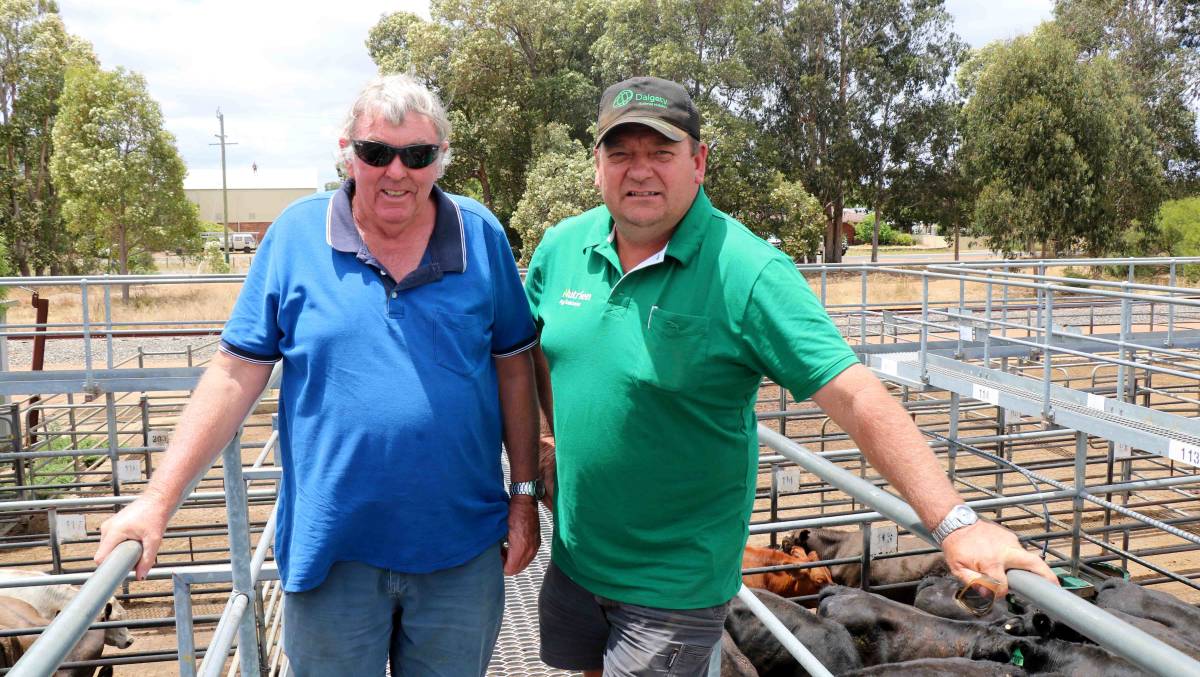 John Steele (left), Manjimup, was at the weekly WALSA weaner cattle sale at Boyanup with Brett Chatley, Landmark Manjimup, who bought several lines of cattle at the sale for clients.

A few more than 800 weaners were offered between Elders and Landmark at the WALSA weekly weaned weaner cattle sale at Boyanup last week.

A FEW more than 800 weaners were offered between Elders and Landmark at the WALSA weekly weaned weaner cattle sale at Boyanup last week.

Quality varied from very high and heavyweights down to the tail end from sellers' paddocks for the season.

For the quality end, values held strong to even be slightly higher on some pens when compared with the previous sale.

Competition was widespread, with strong support from agents, commission buyers, lotfeeders and graziers.

All buyers appreciate calves being weaned and this assisted in the strong result.

Cattle were trucked to the sale from a widespread area, extending from Boddington, Boyup Brook, Bridgetown, Margaret River and Pinjarra with most local South West districts in between supplying and buying cattle.

Elders was first to sell and achieved the top steer price with the first pen offered, 13 Angus steers weighing 416kg from K & AL Payne that sold to Willowbank, Benger, for $1273 and 306c/kg.

The annual draft of Hereford weaners from JL & J Gibbs, Boddington, attracted strong support from bidders, with one line of 13 making the sale top of 342c/kg when bought by Terry Tarbotton, Elders Nannup.

Mr Tarbotton had secured these cattle in previous years and outbid competition on the four pens, also paying $1032 for nine at 316c/kg as well as other lines for 330c/kg and 336c/kg. 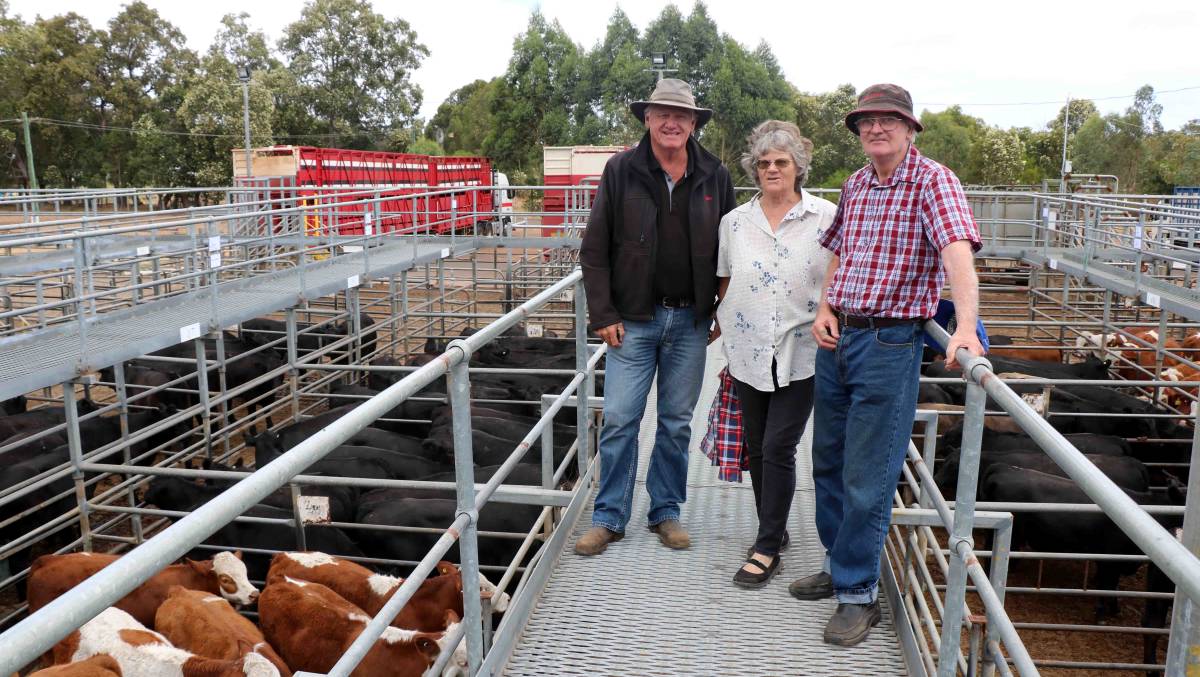 Deane Allen (left), Elders Donnybrook, with clients and sale vendors Robyn and John Lees, Wilga, looking over their Simmental steers that sold for 340 cents a kilogram.

Semini Enterprises secured a pen of four Murray Grey steers weighing 338kg from TC Tremlett, spending $1121, then adding another 12 from RF Ladyman for $1020 and 302c/kg.

It took several pens of heifers to sell before the top price was paid when GJ & J Watt, Cowaramup, bid to 248c/kg for the 363kg Angus from TC & C Bourne that returned $900.

Ben Cooper, Landmark Bridgetown, was strong on heifers in both catalogues, buying 13 Angus from K & AL Payne for $829 and 262c/kg then adding five from TC Tremlett at 254c/kg and $843.

The top steer price was very close when a pen of four Angus weighing 416kg from Antonio Fiorenza sold to GJ & J Watt for $1265 at 304c/kg.

Five pens of Limousin cross sold by EP & DK Gardiner, Brunswick, were popular, being drafted to colour as well as weight.

Jock Embry, Landmark Margaret River, was busy putting together a B-double truckload of steers for a company lotfeeder, paying a top of $1107 at 310c/kg for 10 Angus weighing 359kg from GL & VJ Roberts. 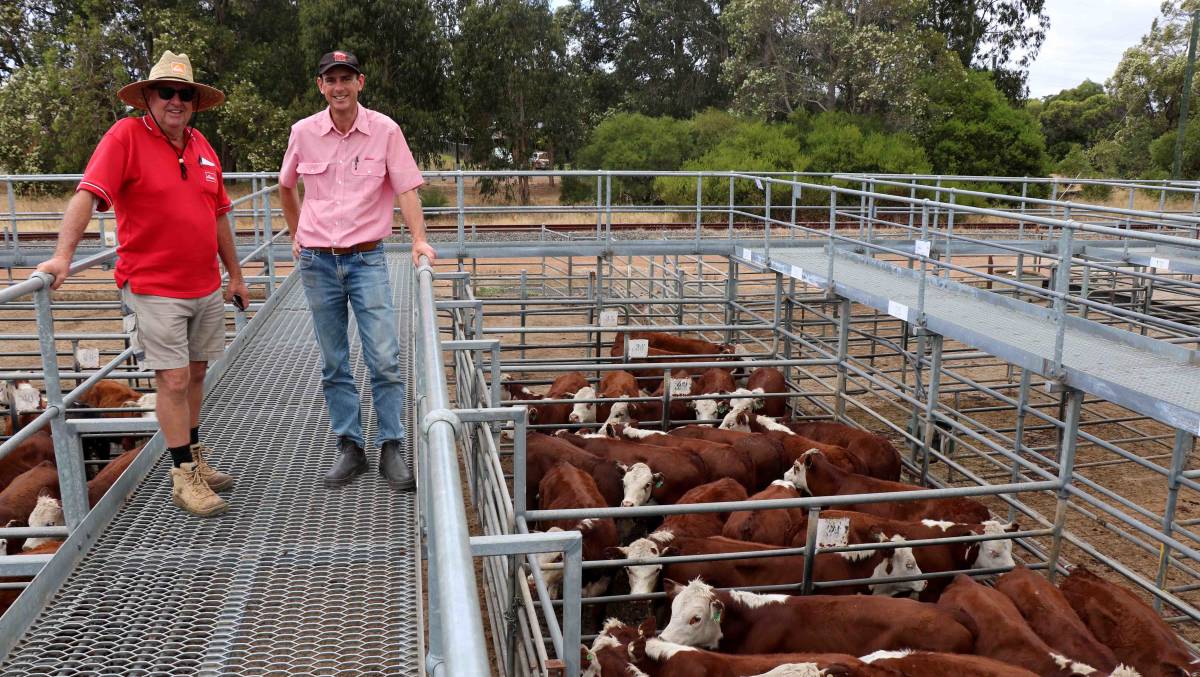 Doug Walters, Acton Park, sold steers for $1020 when Semini Enterprises bid to 310c/kg to secure them.

The top of 328c/kg was paid by AJ Neil, Waroona, for 12 Angus from Sheron Farm, Brunswick, with heavier Sheron Farm steers selling to Willowbank at $1090 and 308c/kg.

A single Charolais steer of 410kg selling late in the section made $1148 for Murray Vale Farm when Willowbank paid 280c/kg.

Travelling from Boddington, the Angus steers sold by TV & G Salmeri just missed the round figure when they sold for $999 at 306c/kg to Ralph Mosca, Landmark Harvey.

Antonio Fiorenza took the double when his pen of nine Angus heifers weighing 370kg topped both at $1007 and 272c/kg, bought by GJ & J Watt.

Rodney Galati, Brunswick, increased the tempo on the heifers, securing numerous pens starting with the two lines of Limousin cross from EP & DK Gardiner costing $969 and $886 at 270c/kg for cattle weighing 358kg and 328kg. 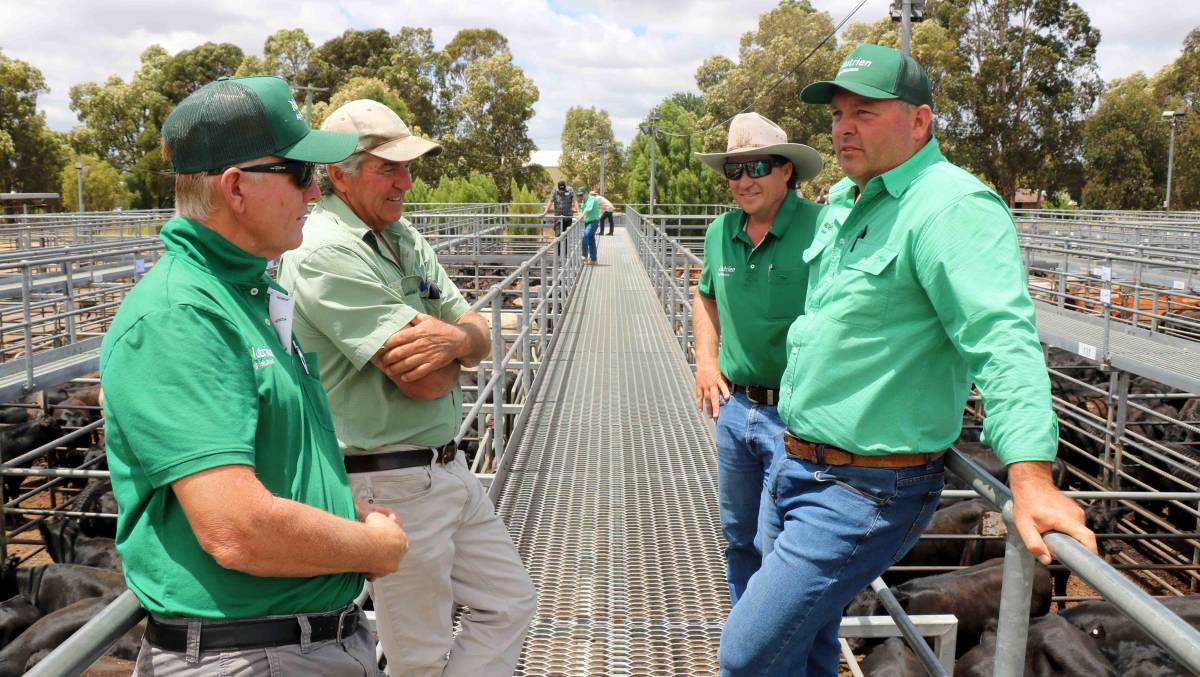 Ben Cooper, Landmark Bridgetown, was another multiple pen buyer, mainly for one client.

Included in these were 12 sold by DV Piscioneri for $756, before paying $905 for eight Charolais sold by Kau & Sons.