Kalium Lakes' major private shareholder Brent Smoothy (left) and chairman Mal Randall standing in the Sunshine Lake pre-concentrator pond before it is lined with plastic sheeting as part of the Beyondie Sulphate of Potash project in the Pilbara.

Potassium fertiliser production and export in Western Australia, due to start later this year, has the potential to extend well beyond the 20 to 25-year initial life span estimates for leading projects.

POTASSIUM fertiliser production and export in Western Australia, due to start later this year, has the potential to extend well beyond the 20 to 25-year initial life span estimates for leading projects.

Front runner in the race to produce local SoP in the fourth quarter this year, Kalium Lakes Ltd (KLL) last week told the Australian Securities Exchange (ASX) a resampling after four years at Sunshine Lake and other lakes to the east - the proposed second stage of its Beyondie project 160 kilometres south east of Newman in the Pilbara - had confirmed "consistent" high-grade potassium reserves.

Results of up to 29,416 milligrams of potential SoP concentration per litre of brine - 13,200mg/l potassium - reconfirmed it as Australia's highest grade SoP resource with low impurity levels, KLL claimed.

The latest results were also consistent with initial results from four years ago and a resampling two years ago to prove the resource did not degrade over time, affected by lower than usual low rainfall or adjacent activity.

KLL has begun pumping brine from Ten Mile Lake, 40 kilometres away, into a plastic lined evaporative "pre-concentrator" pond and is working on a similar pre-concentrator pond and transfer pumping station at the western end of Sunshine Lake.

It is also completing a series of gravity-flowed evaporation ponds and hopes to have a stockpile of harvest salts from Ten Mile and the western end of Sunshine Lake ready for when the production plant is completed later in the year.

In December KLL reported deeper drilling had shown the brine aquifer thickness below Lake Sunshine extended to a depth 196 metres and was up to 145 per cent thicker than previously measured by drill hole sampling.

It has now extended its Beyondie SoP project's projected life span out to 30-50 years and is working on producing an updated declared resource statement for the ASX as the existing statement only covers the resource to a depth of two metres.

Stage one of the project - which proposes to produce 90,000 tonnes of SoP per annum and ramp up to 180,000tpa for local and international sale - represents only 21pc of the project's 30,225 hectares total lake surface area. 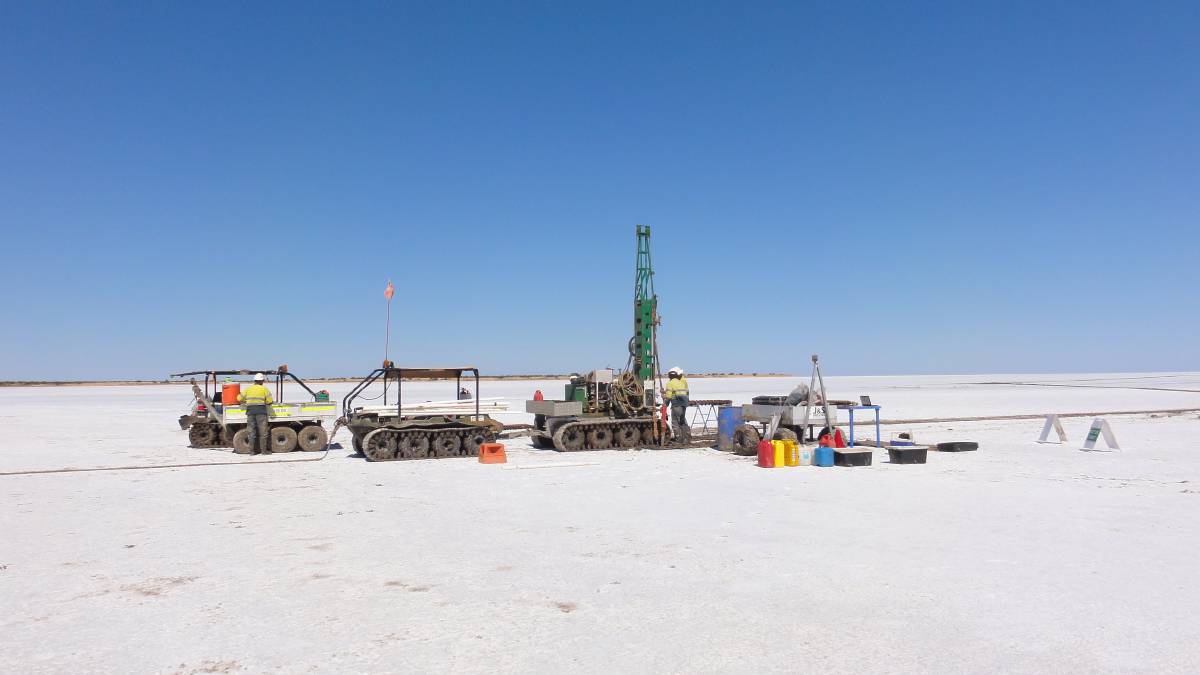 KLL managing director Brett Hazelden said there was "significant potential" in stage two to include the material below the top two metres in an updated declared mineral resources.

"(While) we continue to focus our efforts on developing the stage one area to become the first SoP producer in Australia, it is important for our current and future investors to recognise the potential that stage two offers which has almost four times the lake surface area of stage one," Mr Hazelden said.

As previously reported, KLL has a binding agreement with Germany-based global fertiliser giant K+S to distribute and sell its SoP products in Australia and overseas.

Trigg has SoP prospects based on salt lakes east of Laverton, including Lake Rason and Lake Hope Campbell which forms part of its Laverton Links project and at Lake Throssell further east.

"The 2019 drilling program tested the extent of the Laverton Links SoP project and confirmed the extension of the mineralisation at Lake Rason," said Trigg managing director Keren Paterson.

"At Lake Hope Campbell several thick basal sand aquifer units with potassium grades up to 2330mg/l were encountered with palaeochannel (ancient river bed) widths of up to 1300 metres.

Trigg is also working on a declared resource statement.

The total resource at Lake Mackay has been calculated to exceed a billion tonnes and confirmed the 3500 square kilometre salt lake straddling the WA-Northern Territory border is Australia's largest SoP deposit, AMN said.

It said its "ore reserve" statement is due to be completed during this quarter and it also expects a definitive feasibility study for its SoP project to be completed in "coming months".

"We are delighted to announce a very significant upgrade to the mineral resource for the Mackay Potash Project," said AMN chief executive officer Mark Savich.

"This is the culmination of several years of data collection and extensive hydrogeological modelling, which we believe to represent an industry leading level of rigour in de-risking the project," Mr Savich said.

"Importantly, the outcomes exceed the parameters used in the 2018 pre-feasibility study."