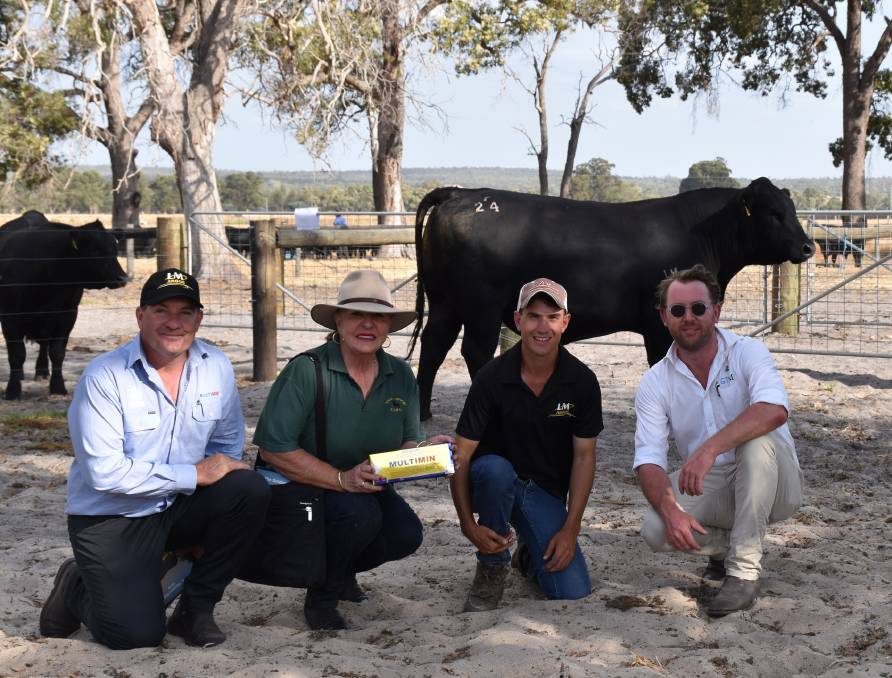 Prices at the Little Meadows Golden Edition Angus bull sale topped at $14,000 and surged beyond the $10,000-mark six times at Dardanup last week.

PRICES at the Little Meadows Golden Edition Angus bull sale topped at $14,000 and surged beyond the $10,000-mark six times at Dardanup last week.

The buoyant start to the auction provided the basis for an increased $6480 average price, but support gave way in the later stages to give a selling pattern in line with other Angus bull sales held so far this year.

The top price was paid by Dale Jansen and husband John, Fernwood stud, who have had a loyal and enduring relationship with the vendors since they established a herd on their Gingin property 15 years ago.

Ms Jansen said they bought bulls from the Golding family nearly every year and the purity of Little Meadows through their herd enabled them to sell the top of the drop as bull calves back to the parent stud.

Pascoe was among the heavier bulls on offer currently weighing 836 kilograms and ranked in the top eight percent of the breed for all growth traits; top 3pc for scrotal size and top 2pc for carcase weight.

The bull was one of four highly rated by Little Meadows studmaster Tony Golding who worked them as yearlings over selected heifers and cows for this year's calving.

Chloe and Chris Darke with their mother Anna, Boyup Brook, were buyers at the Little Meadows sale last week where they bought a $4000 bull.

The smoothness and top line of the April 24, 2018-drop bull was described as so level 'you could play billiards on his back' by colourful and coercive auctioneer Miles Pfitzner from Glasser Total Sales Management.

Ms Jansen said they hadn't intended to buy this year but decided at the last minute to get a sire to go over their youngest heifers.

The bull was a full embryo transfer brother to the 2019 Black Dog Ride Charity heifer LM Wilcoola P7 sold in Melbourne for $26,000 to a four-member syndicate that included Fernwood stud.

Losing bidder was Esperance cattleman Wes Graham, who conveyed his bids by telephone and bought LM Philander P19, a full ET brother for $10,000 and paid $9000 for a second bull LM Packer that was the heaviest in the catalogue at 970kg and by American sire VAR Discovery2240.

The buyer was Farris Family Trust, Busselton, which also paid $4000 for a second bull.

Before the Little Meadows sale got underway Mr Pfitzner said bull sales had been a bit up and down but the crowd was good, the cattle were good and anything could happen.

After the event he summed up saying it was a very selective group of buyers and the top end of the bulls sold extremely well and they needed to because they were of exceptional quality. This year the clearance was bolstered when a further two bulls sold after the auction.

Mr Golding was ecstatic with the string of high prices and far less concerned about the drop in clearance saying it was the least of his worries.

"There are trying conditions across much of the state and I think other bull sales will be like it all year," Mr Golding said.

"We are trying to present bulls well; that are not overdone, and you can see their temperament.

"It is a real family affair and I thank all the family for their support and dedication."

The sale was supported by a 39-strong buying register of which 26 successfully secured bulls.

Among them was Semini Enterprises, Cowaramup, which spent the $11,250 third highest price to get another bull that the auctioneer said 'stud sire was written all over him' and had been worked in the stud last mating.

LM Phoenix P18, by VAR Generation 2100, was in the top 12pc for all growth traits, top 6pc for docility and top 4pc for carcase weight.

Creek Farms, Mayanup, was successful at $10,500 for one of the first sons of Baldridge Bronc (USA) and Carabin Limestone, Gingin, paid $10,000 for a son of Kansas Aberdeen F84.

Shahni Clifton and her mother Angie from Carabin Limestone said they were running about 150 breeders and wanted a bull to go over second calvers that would improve their replacement heifers.

They looked for a good 200-day weight EBV and were pleased to get their first choice that was in the top five percentile band for that weight interval and had the style and moderate frame for which they were looking.

A bull that drew worthy attention was another son from Coonamble D252.

Mr Golding stopped the sale to tell the story saying the dam had been flushed four times and produced 75 embryos before she was put back in calf to Booroomooka Bartel K320.

She dropped Little Meadows Promoter P245 on December 5, 2018 and at just 14 months it was the youngest bull in the catalogue.

He sold for $9000 to Owen Hopkins, Busselton, who has been a loyal client for at least 10 years.

Mr Hopkins normally sold his steer calves straight off their mothers to lot feeders and kept about 30 replacement heifers.

This year his surplus heifers sold to an Esperance breeder.

Mr Hopkins said he normally bought one or two bulls every year for his 160-head breeding herd and was looking for good growth and eye muscle EBVs.

This year he liked the youngster so much he bought a third saying he would allow the bull to grow out another year before joining it.

Another young August-drop bull by Bartel K320 made $9500 and was the second highest indexing bull in the catalogue.

The buyer was David Morris, Boyanup, and the bull LM Patrolman P217 was in the top 10pc for Angus breed and grain, top 15pc for domestic market, and top 5pc for grass indexes.

The agent was Delaney Livestock Services.