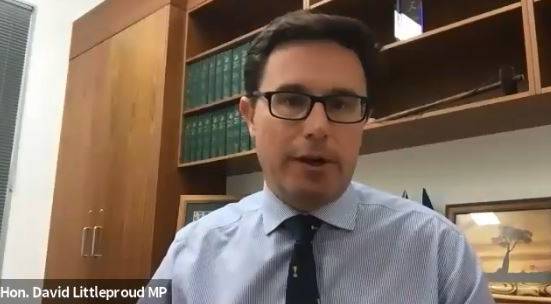 Australia has awoken to the importance of agriculture says David Littleproud.

Australia has awoken to the importance of agriculture says David Littleproud.

AGRICULTURE Minister David Littleproud says Australian farmers should be very proud of the role they are playing during the current COVID-19 pandemic, and also the vital role they will play in rebuilding Australia's economy once the health crisis is over.

Speaking from his office in Warwick, Mr Littleproud was speaking on a Rural Press Club of Queensland webinar. More than 300 people tuned in for the special event hosted by RPC president Stacey Wordsworth.

"Can I say to all of you, whether you are a farmer or a service to agriculture, thank you," Mr Littleproud said.

"The nation has awoken to the importance of agriculture, the bedrock that we provide, not only to our nation's economy, but also our nation's security.

"We have underpinned our nation's security through food security.

"That is something at times has been taken for granted, but what these extraordinary circumstances have highlighted is the important role we play.

"That's the important role I think Australians have become reconnected with."

Mr Littleproud said agriculture had led from the front during the current health crisis.

He paid tribute to the role the National Farmers Federation and its president Fiona Simson had played in advising government and communicating with the farm sector during the health crisis.

During the 55 minute event Mr Littleproud also addressed a wide range of questions, including the threat of African swine fever.

RPC president Stacey Wordsworth said Thursday's webinar would hopefully be the first of many hosted by the Rural Press Club as it adapted to the changing world.

"The Rural Press Club is determined to continue to provide a voice for the agriculture industry and provide our valued members and guests with the latest news and events from government and industry leaders," Ms Wordsworth said.