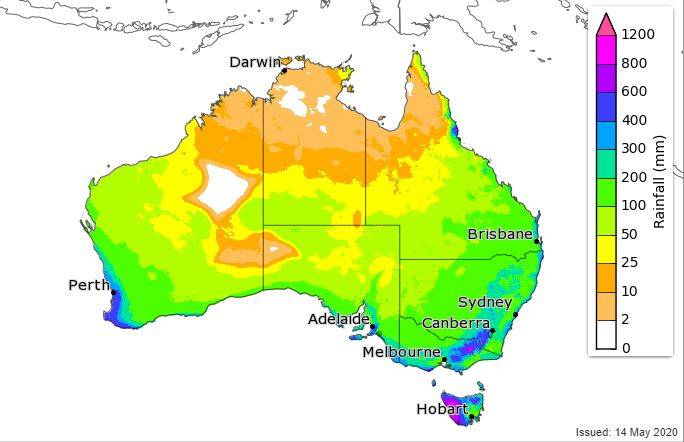 This map shows the minimum amount of rainfall there is a 50 per cent chance of receiving over winter according to BOM forecasts. Source: BOM.

The dry spell is set to break and then it could remain wet for some time if long term forecasts are on the money.

CROPPERS anxious for rain are beginning to see some reason for optimism with much of the country likely to receive good falls in the next seven days.

According to the US-based National Center for Environmental Prediction (NCEP) there could be widespread falls in excess of 50mm over much of Queensland from May 21 to 29, while parts of far south-west Western Australia could also see high tallies.

Bureau of Meteorology (BOM) mapping shows solid falls through Victoria tonight through to Thursday, while later in the week Queensland, where croppers need rain to plant the winter crop, is also set for a fall over Wednesday / Thursday, although projected totals are still varying wildly.

In Western Australia almost all the west coast regions from the Kimberley right through to the south-west corner are expecting rain over the weekend, with some useful tallies in the offing with tropical moisture feeding through.

In bad news for the cropping sector, however, it is expected to be very much a coastal rain and not push into inland agricultural districts in any meaningful format.

In spite of the lack of rain in some key cropping zones in WA, northern NSW, Queensland and SA's Eyre Peninsula, there is still good optimism for the year ahead, and that was buoyed further by a report from the BOM last week.

In its seasonal projections the BOM pointed to a big swing in favour of better than average winter.

The BOM has virtually declared wetter than median conditions across most of inland Australia, including the critical Murray-Darling Basin, with the odds of exceeding the median in excess of 80pc for most of the continent but south-west WA, areas to the east and south of the Great Dividing Range and northern Queensland.

Historically, the BOM rarely comes out with figures as strong as this in favour of wetter or drier conditions.

Critically, the outlook into spring is also good, with a similarly strong bias towards wetter conditions in the BOM's July to September figures.

The forecast is based on the forming of an Indian Ocean Dipole (IOD) negative event.

All the models used by the BOM now predict an IOD negative will form at some stage this year.

In the Pacific, it is likely neutral conditions will remain, although three out of eight models used by the BOM are predicting a La Nia will form at some stage.

The story Wet end to May then good winter prospects first appeared on Farm Online.