Recent research at Merredin and Wongan Hills has shown that high levels of crown rot can cause average yield losses of 19 per cent in bread wheats and 18pc in barley..

JUST in time for the 2020 cropping season, the Grains Research and Development Corporation has released regional specific fact sheets on the best management practices for crown rot in cereals.

The fact sheets are the accumulation of more than six years of research and trials, with recent research at Merredin and Wongan Hills showing that high levels of crown rot can cause average yield losses of 19 per cent in bread wheats and 18pc in barley.

Crown rot is a widespread stubbleborne fungal disease in the western grain-growing region, the key symptoms of which are the presence of whiteheads and a brown stem base.

"They may first appear in wheel tracks, old weed patches or around trees where crop-available soil moisture is more limited, however, whiteheads may not appear on all stems of an infected plant. 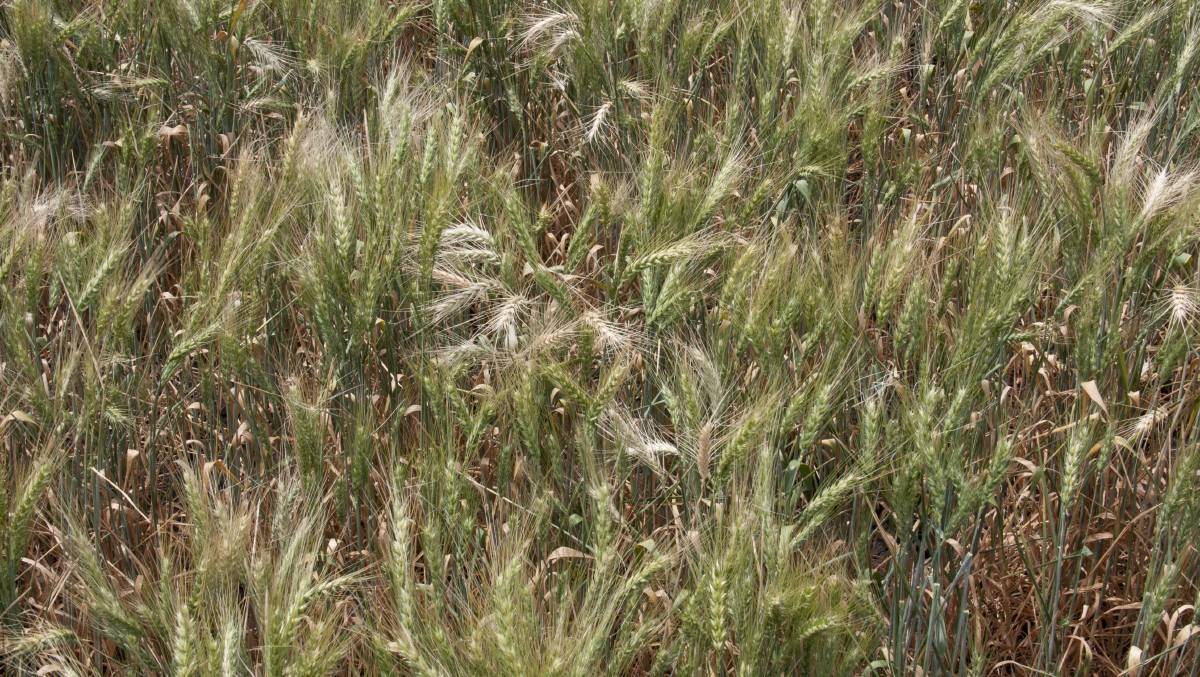 "Barley generally does not produce whiteheads because it matures earlier than wheat, which helps it escape late-season moisture stress, but yield losses can still be significant and equal to those in wheat."

A brown stem base is the more reliable indicator of crown rot infection as this symptom becomes more pronounced from mid to late grain filling through to harvest.

Dr Huberli said in wetter or milder years, checking plants around tree lines could be a better indicator of crown rot infection levels.

"To inspect for the honey/dark brown discolouration, pull back the leaf sheaths at the stem base," he said.

"This browning may also be seen in combination with white/pink fungal growth that can be on either the outside of the lower stems underneath the leaf sheaths or visible if the stem is cut open.

"The pink fungal growth only occurs when moisture is still available late in the season and should not be used as the definitive symptom of crown rot infection."

When it comes to managing crown rot there are a few points which growers should keep in mind, the first of which is knowing a paddock's risk level which can be determined by pre-sowing a PREDICTA B soil test.

PREDICTA B is a DNA-based soil test that detects levels of a range of cereal pathogens, including the main Fusarium species that causes crown rot.

"The test identifies the level of risk for crown rot and other soil-borne pathogens before sowing, it requires a dedicated sampling strategy and is not a simple add-on to a soil nutrition test," he said.

"Collection of soil cores should be done on the previous winter cereal rows, if possible, and any stubble fragments should be retained."

Rotating at-risk paddocks to non-host crops is the most important management option, a grassfree break from winter cereals is the best way to lower crown rot inoculum levels.

In general, the higher frequency of winter cereals within the rotation increases risk, while inoculum levels decline over time and will be highest in cereal-on-cereal rotations, lower following one break crop and even lower after two break crops.

"Breaks from winter cereals decrease inoculum and will be most effective if free of grass weeds and volunteer cereals," he said.

"For break crops, early canopy closure and warm, damp conditions under the canopy will result in the fastest decomposition of crown rot-infected plant residues and reduction of inoculum levels.

"Good rainfall increases the effectiveness of the break, because cereal residues harbouring the pathogen are more readily decomposed by microbes in moist conditions."

If disease levels are high and rainfall is low, it may take two to four years for infected plant residues to decompose to the point where inoculum levels are low.

Choosing more resistant crop varieties or those shown to have lower levels of yield loss can also help, but that still needs to be combined with other management strategies.

Dr Huberli said no cereal crop or variety was fully resistant to crown rot, but some new barley and wheat varieties have a measurable improvement in their yield performance when infected.

"Wheat and barley trials conducted at Merredin and Wongan Hills from 2014 to 2016 found that all varieties had reduced yield in inoculated plots," he said.

"However, Emu Rock was consistently the least affected by crown rot, while other varieties were less robust, for example, Justica CL Plus consistently had the greatest reduction in yield.

Regardless of the results of the trials, variety choice is not a solution to crown rot as even the best bread wheat or barley variety can suffer up to 40pc yield loss under high infection levels and a dry/hot seasonal finish.

Management decisions within the paddock can also affect crown rot inoculum levels, with decisions such as time of sowing, crop choice, inter-row sowing and crop nutrition affecting the impact of crown rot on yield and grain quality.

Dr Huberli said time of sowing had little impact on the incidence of crown rot infection, but disease severity and yield loss increases with later sowing.

"Planting date should be determined by the presence of adequate soil moisture, the type of variety sown and the management of frost risk," he said.

"Sowing a variety early in its sowing window will help minimise the detrimental effects of any crown rot infection by bringing the grain-filling period forward into slightly reduced evaporative stress conditions." In the western region, inter-row sowing using accurate plus two centimetre differential GPS autosteer has been shown to decrease the number of infected plants by about 50pc, resulting in a five to 10pc yield advantage in the presence of crown rot.

Dr Huberli said it was important to match nitrogen rates and timing to store soil moisture and target potential yield as crown rot was more severe when a crop suffered from water stress late in the season.

"Ensure crops have adequate zinc nutrition as whitehead expression can be more severe in zinc-deficient crops.

"However, applying zinc above recommended rates will not provide further protection from crown rot."

While all of these management practices will help, it is important for growers to remember that there are no fungicide options registered for in-crop control of crown rot as the fungus is protected inside plant material with infection concentrated at the base of tillers.

There is also little current paddock evidence that particular soils can suppress crown rot, but soils that hold less moisture or restrict root growth, such as compacted soils, can exacerbate expression of this disease.