Brittany Bolt, Wagin, said she was biased in her love of sheep.

"I love sharing stories of agriculture with students from both rural & city backgrounds & promote the opportunities that the ag world has for young people."

A DESIRE to work with production animals such as sheep and cattle has been the driving force behind Brittany Bolt studying Animal Science and Animal Health at Murdoch University.

Ms Bolt is in the final year of a three-year degree and is working on her honours project after achieving distinction marks of 70 per cent or more in previous units to qualify.

Having grown up on a mixed sheep and cropping farm at Wagin, Ms Bolt developed a love of production animals and said she is "biased" in her "love of sheep".

On the farm she helps collect data and breeding values for the family's Poll Dorset stud, Rockalong.

"While I was in Narrogin for year 11 and 12, I studied ATAR subjects," Ms Bolt said.

"Curtin AHEAD was a program that had just started up and I was one of the students to be in the first group to go on its camp.

"Curtin AHEAD is an organisation that encourages students to have a crack at tertiary education, provides insight to what university is like and the requirements to get into uni (with particular focus on country/rural schools).

"Once I started university I was approached by Curtin AHEAD to be a part of its team.

"Since then I have been involved in numerous on-campus university tours and school visits where workshops are specially designed to cater to each year and the teacher's goals (from years 7-12), in a sort of step wise progression through the years leading up to making decisions post graduating high school.

"STEM learning, in particular, is a focus as well as a mix of fun activities that involve transferable skills for the workplace.

"As students get older (years 11 and 12) it is more about studying ATAR and the transition to university.

"It's been a very rewarding job throughout uni, where I've been able to discuss with students and teachers pathways for students to follow their dream career path.

"I have also been lucky to use this to share my life experience in agriculture and my studies at Murdoch.

"I love sharing stories of agriculture with students from both rural and city backgrounds and promote the opportunities that the ag world has for young people."

University has provided some life changing experiences with a trip last year to China where Ms Bolt was able to give a presentation at the CAU Beef Cattle Research Centre on the Australian red meat industry.

"I've had a lot of other opportunities through Murdoch as well as working with leading sheep researchers, who have been really helpful throughout my studies," she said.

Ms Bolt was at Wagin Woolorama in March assisting The Livestock Collective director Holly Ludeman at the display, where she was able to share some of her learning and experiences with visitors.

"I've been following the Sheep Collective for a while and was eager to get involved," Ms Bolt said.

"Since then I've done a couple of radio interviews with MMM Rural Focus and helped at The Livestock Collective's stall at the Perth Royal Show.

"I loved interacting with people who aren't in the industry and seeing how positively they have responded to it."

Ms Bolt attended the pilot Livestock Leaders Workshop in Perth in February which was run by The Livestock Collective and Lush content agency and brought together 16 participants from across Australia.

"I was very lucky to be invited to attend the pilot workshop," Ms Bolt said.

She said the course gave her the opportunity to learn how to talk to the media and share her story in a more effective way and appreciate the importance of shared values.

Aside from all the community engagement Ms Bolt has also been active in sheep and carcase judging. 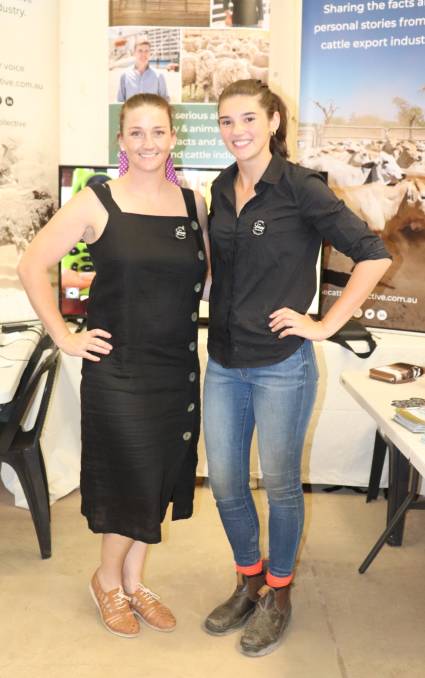 At Wagin Woolorama she judged a section of the sheep judging competition and the family had some sheep competing as well.

"Although we missed out on a prize for our sheep this year, my brother won the junior handling competition for showing our Rockalong Poll Dorset stud and walked out with a quad bike," she said.

"I got some wine for judging the Ile de France and the mixed breed classes alongside the other judges, so that's a pretty good win."

During her studies she engaged in the Intercollegiate Meat Judging Competition at Wagga Wagga, New South Wales, which gave her "a good insight into the workings of an abattoir".

From the competition she was chosen as one of the 10 coaches' choices to participate in an industry training week in Brisbane, touring supply chains and judging carcases in abattoirs.

Ms Bolt said while she has been studying she has been "back and forth" to the farm at Wagin but since COVID-19 restrictions have been in place she has been home full time juggling her studies with farm work.

As her studies end this year she is in the throws of collecting data for her honours project at the Katanning Research Centre.

She will be looking at the relationship between frame size and body composition in Merinos.

It involves taking manual measurements of body dimensions, taking images of the sheep from different angles in a specialised crate and then scanning the sheep using dual-energy x-ray absorptiometry (DEXA) to measure percentage and distribution of the muscle and fat on the body.

The aim is to develop the use of frame size measurements in sheep in combination with condition scoring to enhance the accuracy of on-farm prediction of body composition.

"There's an increase in interest in dual purpose traits from Merinos and this will hopefully be a helpful tool to aid in farmers' selection and management decisions," she said.

The study has been running since February, using 320 sheep that have been split into two trial groups at the Katanning Research Centre.

Every five weeks, a block of 160 will be scanned over a week.

This takes place three times for each trial group.

While Ms Bolt has no set dream job, she is focusing on gaining as much experience as possible off-farm to keep her options open and she enjoys learning about different areas in agriculture.

"Opportunities popped up and I just gave it a go.

"I stuck my hand up for as much as possible and I am excited for my future in the industry."