Overseas investment in Australian agricultural land has remained relatively stable over the past four years, rounding out to 13.8 per cent as at June 30, 2019.

OVERSEAS investment in Australian agricultural land has remained relatively stable over the past four years, rounding out to 13.8 per cent as at June 30, 2019.

A report by the Australian Taxation Office found that 52,126,000 hectares was foreign owned, a slight decrease from the previous year's 52,602,000ha, indicating a drop of 0.9pc.

In all, 13.8pc of Australian farmland was recorded as foreign held.

Western Australia saw the largest increase in foreign investment from the previous year, with a 1.1pc rise. 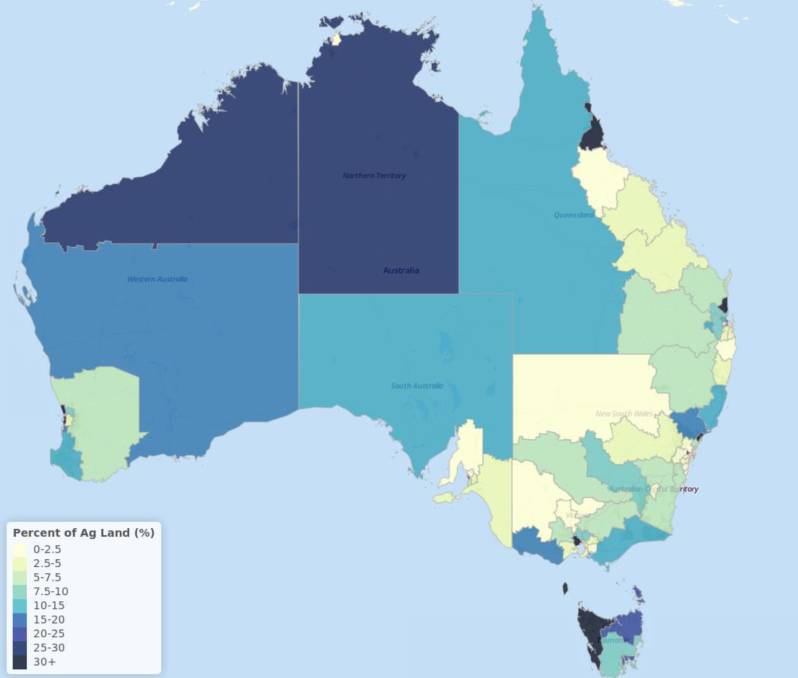 The proportion of agricultural land with a level of foreign ownership by region. Tables: ATO.

This increase places WA in third position for the largest percentage of foreign ownership at 18.3pc, behind the Northern Territory with 27.7pc of foreign investment and Tasmania at 25.5pc.

Victoria had the largest decline of foreign investment, with a drop of 6.4pc.

The number of properties held with foreign interests increased by 3.8pc to 9044.

While the number of WA properties with foreign interests remained stable, increasing by 0.9pc to 1394 properties, New South Wales/ACT had the largest increase, at 7.8pc to 2386 farms, despite recording the lowest level of foreign ownership at 4.9pc. 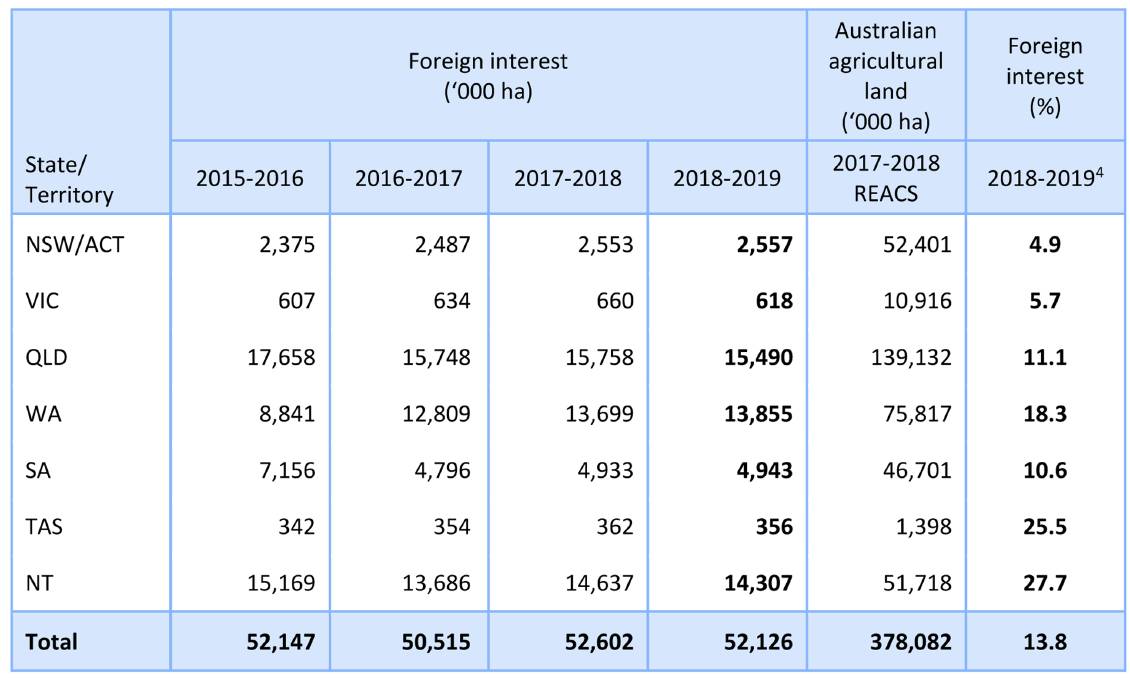 Area of Australian agricultural land with a level of foreign investment. Note: While foreign ownership has fallen from 52,602,000 hectares as at June 30, 2018 to 52,126,000ha at June 30, 2019, the percentage of foreign held farmland increased by 13.8pc, this discrepancy is due to sampling variability from two different datasets.

More than 85pc of foreign owned agricultural land is utilised for livestock (44,608,000ha).

There has also been an increase of 6.2pc in foreign investment for land used for cropping.

Across the country, foreign interests in livestock and horticulture have slightly decreased by 1.3pc.

The majority of foreign held land that is used for cropping is within WA, comprising 657,000ha.

However within WA, most of the State's foreign held farmland is utilised for livestock, 11,997ha, which is similar to the national profile.

About 83pc of farmland that is foreign held is on a leasehold basis.

On the opposite side of the scale, the majority of foreign investment in Victoria is (87pc), Tasmania (86pc) and NSW/ACT (75pc).

The total area of freehold land with a portion of foreign ownership has declined since 2017/18 by 7.3pc.

But the overall area of leasehold land with some level of foreign interest has remained rather stable, increasing by 1.9pc.

Combining the total freehold and leasehold foreign ownership interests, China and the United Kingdom represent the countries with the largest proportion of foreign interests in Australian farmland (each with 2.4pc), followed by the Netherlands (0.7pc) and the United States (0.6pc).

Of these major foreign land holders, the Netherlands was the only country that recorded an increase in foreign held land in the past year, at 1.2pc.

The US had a decline of 20pc in foreign interests, the UK a 14pc drop and China had just a 0.2pc reduction in Australian farmland investments.

The Netherlands has the largest portion of freehold Australian farmland, with 1,653,000ha and China holds the most leasehold land, of 8,313,000ha.

The report attributed the changes in agricultural and interests by country of ownership compared to the previous report to: