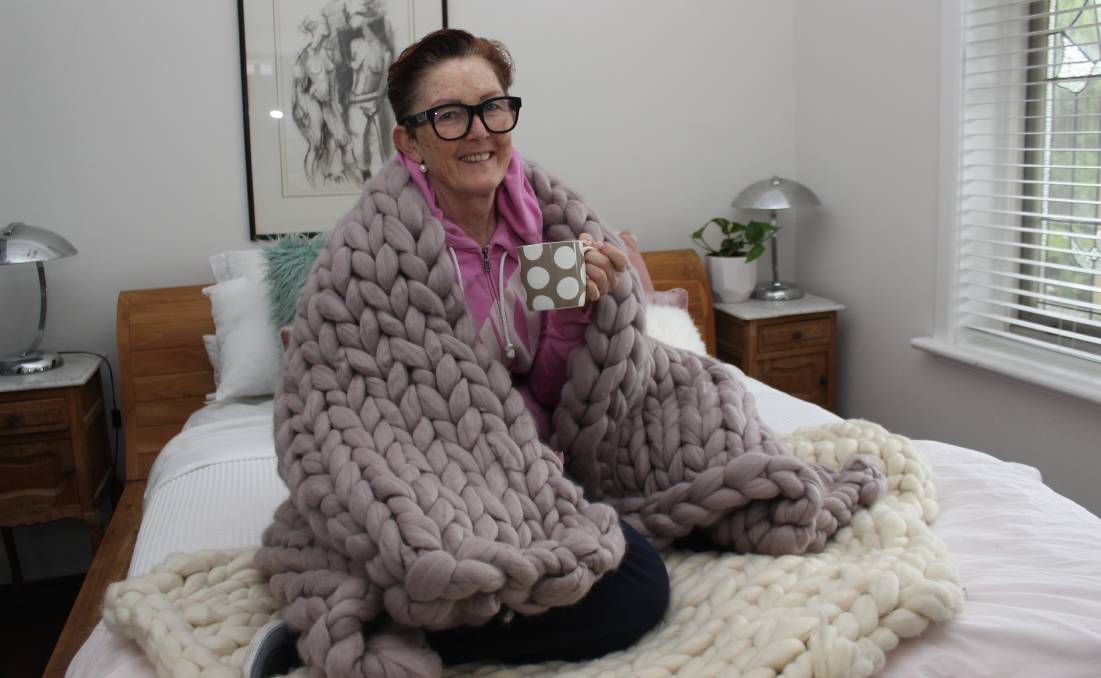 Wendy McClelland is the face behind Its Pretty Knotted, turning Australian Merino wool into beautiful handmade blankets, scarves and cushions.

KNITTING as a craft may have once been considered 'old school' but in recent years it has seen a resurgence among all ages and even genders, with social media sites dedicated to showcasing people's creations and bringing together knitting enthusiasts.

Although knitting is an age old craft, it shows no signs of being lost any time soon, in fact there are new ways and styles being practiced that have really made it appealing to a new generation, who may never have thought to try it before.

Though many of you would immediately be thinking of the jumpers Nanna knitted you in days gone by, there is one 'new' style in particular that became an instant inspiration for Perth artisan and knitting devotee, Wendy McClelland, and she wants to bring the same joy to others.

Wendy fell in love with extreme knitting, yes you read that correctly - extreme.

Although it may sound like a sport featured on a discovery channel documentary - it is not all as it sounds.

It has become a giant trend, literally, as it uses super sized knitting needles and yarn to create large, thick, woven pieces from scarves to blankets, of all sizes, and various items in between.

For Wendy it all began with a passion for Merino wool that led her to build her own business, It's Pretty Knotted. 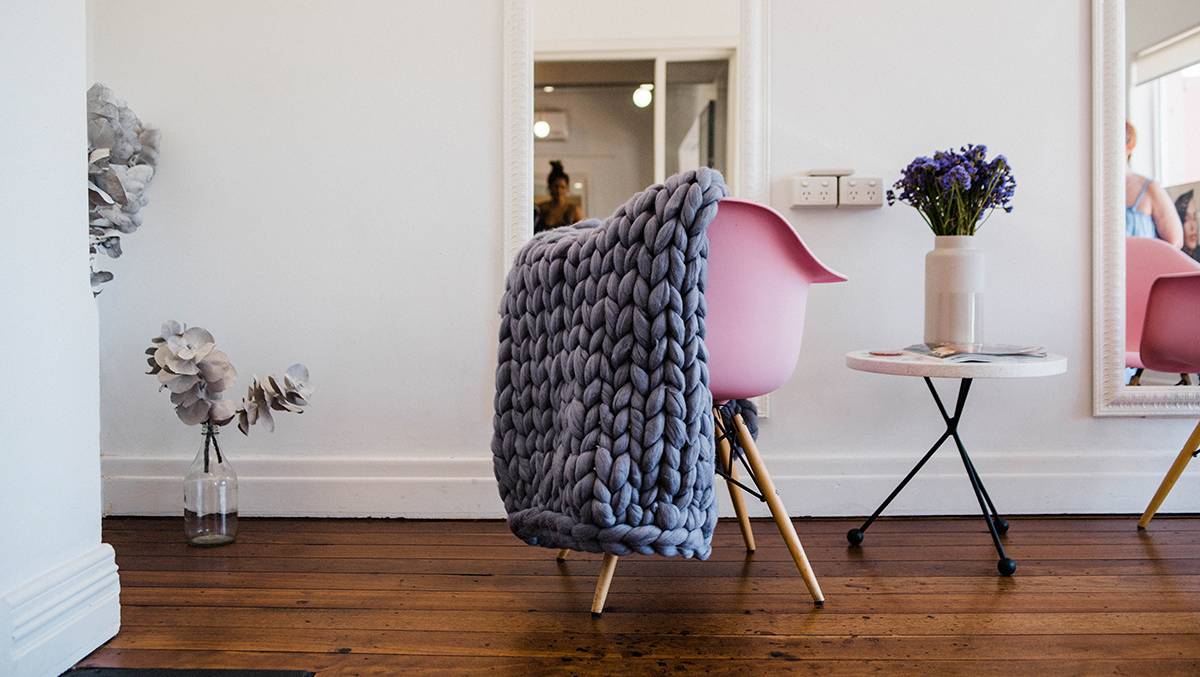 "I was taught to spin wool in the 1980's by an elderly lady called Mrs De La Hunty, who had moved from Europe before World War I and was one of the founders of spinning in WA," Wendy said.

"They used to knit jumpers and socks for the soldiers in the war.

"She taught me how to spin, so I used to buy my own fleeces then carve them up, spin them and then knit them."

Wendy by her own admission has knitted for a long time, but it was through social media that she came across another way to knit and further her passion.

"It was through Instagram that I discovered extreme knitting and really fell in love with it from there," she said.

"I just found it fun and love the way it looks and the pieces I can create." 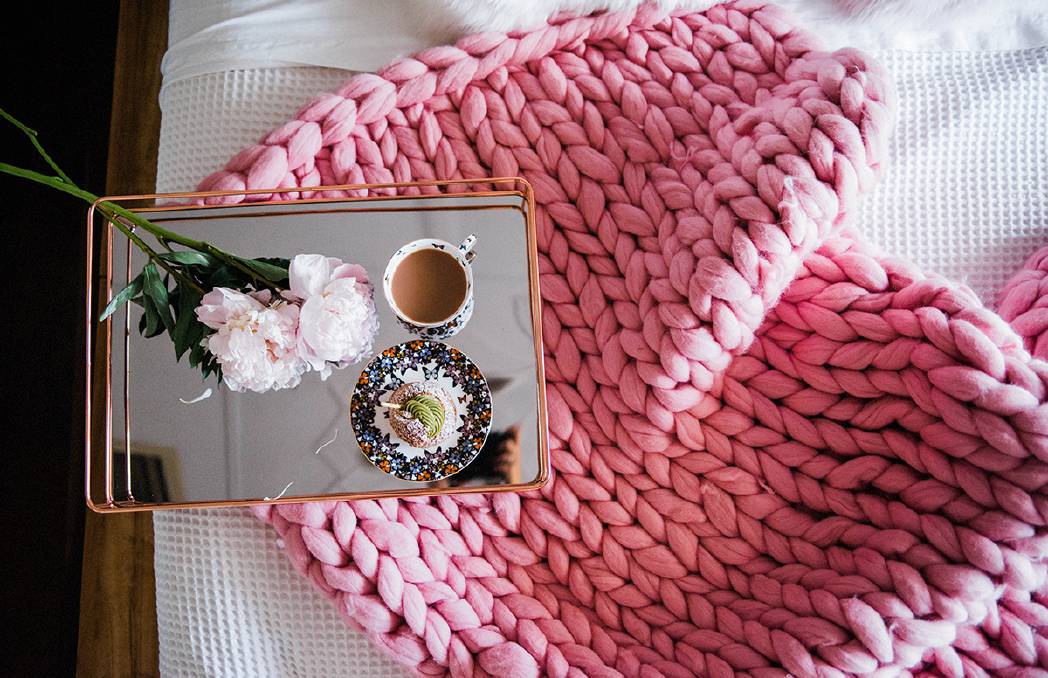 Today knitting has returned to its roots in many ways, with the mass produced clothing losing favour, and the creative aspects of the craft not only inspiring designer garments - but also amazing chic homewares, furthering its reach to those who love luxury and indulgence.

Wendy has built her business and her brand through her bespoke, luxury scarves, blankets and throws.

Which has seen her come a long way since her days of attending the Perth Royal Show and buying some fleeces to spin herself.

"Many years later, I discovered the beautiful Merino woollen tops that I now work with," she said.

"I love the feeling and texture of the product and the beautiful yarn that it produces. "

She said extreme knitting had a huge following in Europe, where many of the purveyors of the craft use the stronger 23 micron Merino wool or even synthetics and acrylics.

"This is something I will never do, I loathe synthetics and the way they feel, I will only work with Australian superfine Merino wool," Wendy said. "At first I did use the 23 micron wool, but found it scratchy and rough and it had a strong smell to it, which is not ideal for blankets close to the skin.

"Then I discovered I could purchase 18 micron Australian Merino wool.

"I love how it is so soft and that it turns the notion that wool is itchy and uncomfortable completely on its head.

"Merino fibres are so much finer and softer than other standard wools.

"As a next to skin layer, Merino wool is hard to beat."

She said another feature of Merino wool which is wonderful is that it has a natural oft, that traps heat very efficiently between the fibres, making it warmer than a synthetic of the same weight and does not hold odours.

"It is such an amazing product that I feel passionate about and is the foundation of It's Pretty Knotted's products."

After a trip to China and with the help of her son, who is in the curtain making business, Wendy has now created a very streamlined direct link to a processor in China, with the assistance of an on-site quality inspector giving her access to 100 per cent Australian superfine Merino wool, dyed to her specifications and on her doorstep within five to seven days of ordering.

With this part of her business having garnered a lot of interest since it began in 2018, Wendy has now grown her business to include the provision of workshops and extreme knitting kits.

"This year my focus has really been on the workshops," she said.

"I have been running these at The Art Space Collective in Scarborough, which is an amazing space.

"But if a group of people wanted to get together and have their own private worskshop then I am happy to organise this as well."

The workshops can be centred around one of three items, a giant knitted blanket, a round hand knitted cushion or a scarf.

If you have ever wanted to give giant knitting a go then the giant knitted blanket workshop is the ideal place to start.

Wendy said giant knitting is suitable for all levels of ability, even beginners.

If you are new to knitting you will learn to knit in this class, with the basic stitches of knit and purl, you can basically create anything.

As an experienced knitter this would be easy, but you do have to learn to master your giant circular needles.

"You choose what size blanket you would like to knit and the choice of your colour and then have fun with giant knitting needles and super soft yarn," Wendy said.

"Each workshop includes the kit that accompanies the chosen item."

1.5kg Superfine Merino wool to get you started with the option to purchase more at the workshop, 45mm Giant bamboo needles and a Throw pattern to take home.

The hand knitted chunky scarf is also a great workshop for beginners to learn the basic techniques and to master using the needles, while ending up with a statement fashion item, while the cute round cushion, available as a workshop, is actually hand knitted without needles and leaves you with a gorgeous, chunky, personalised, stylish piece for your home.

Alternatively Wendy offers these items as a kit for purchase on its own, with instructions for you to make the items yourself.

"I am the only person running extreme knitting workshops in WA," Wendy said.

"I have a very niche market for my business, as there are not many people doing what I am doing.

"There have been other extreme knitting workshops run in Perth in the past, but they have been from over East or New Zealand and have come to teach.

"Two of my workshops at The Art Space Collective have sold out and we are putting on a third."

Wendy said over the last couple of years, and particularly during the last few months and the COVID-19 pandemic, knitting has become very popular and people have researched wanting to make their own things.

"It is also true for them wanting to know about where their products come from and wanting natural and organic fibres," she said.

At the moment It's Pretty Knotted is still a sideline for Wendy, but her hope is that one day it will become her fulltime passion.

If you have ever wanted to try something different and create or buy something incredibly luxurious for yourself, then it is time for you to check out It's Pretty Knotted and get in contact with Wendy.