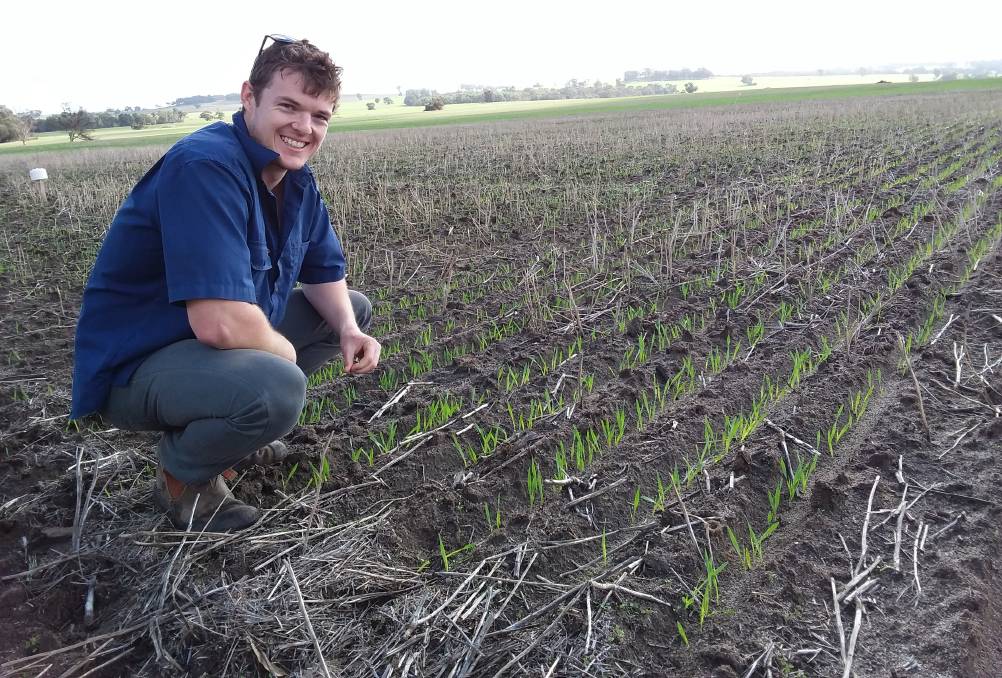 Calum Watt will complete his PhD at Murdoch University in September this year after nine and a half years of study. The reseach project aims to improve the grain quality of barley. Below: Mr Watt represented Murdoch University at a Three Minute Thesis competition at the University of Queensland in Brisbane last year.

"As a barley scientist, I have the benefit that I can talk about beer being one of the end uses."

AT just 26-years-old Calum Watt has already achieved what many haven't later in life, studying a PhD which aims to improve the grain quality of barley.

His research sits within a Murdoch University project that has about $1 million worth of funding from the Grains Research and Development Corporation (GRDC).

"Barley is a relatively under researched crop despite its importance globally for feed and malt," Mr Watt said.

"I perform the genetic component of this grant, but when I finish somebody else will have to pick up where I have left off."

Funding for his PhD research project has also been supplemented by a GRDC postgraduate scholarship which allowed Mr Watt to travel internationally to attend workshops and conferences to improve his skill set, as well as a Council of Grain Grower Organisations Ltd (COGGO) grant he applied for in 2018 to integrate herbicide tolerance, certain disease resistances and a larger grained phenotype into currently grown barley varieties.

"This type of work aims to improve the grain quality of barley," Mr Watt said.

"If we are able to breed a variety with larger grains we aim to reduce the likelihood of screenings, which is a quality aspect influencing the segregation of barley.

"Additionally, a larger, plumper grain has a better feed conversion and malt extraction than smaller grains, so improving grain size is quite important for the two major end-use streams of barley."

After deciding he wanted to become a plant breeder in the second year of his undergraduate degree, Mr Watt spoke to those already in the industry and realised he would need to undertake a PhD to be successful.

"I was offered scholarships in Scotland, over east and at other WA universities, but I chose Murdoch because my current supervisor understood my desire to improve productivity," Mr Watt said. "We have formulated a project that allows me to also perform some small breeding projects to give me that practical experience but also undertake research that the industry needs."

Combining his interest for plants, agriculture and a newfound love for genetics, Mr Watt said genetic research improved the productivity, sustainability and profitability of grain production by enabling plants to utilise their resources more efficiently and withstand seasonal stresses.

"There is only so much that management and agronomy can do to improve the productivity and sustainability of the grains industry, so you could consider genetics as the last hurdle," Mr Watt said.

"Growers subscribe to this 'best practice' management methodology, yet there is still a lot of yield potential left in the paddock in any given season and region.

"More often than not it has something to do with some sort of stress - for example the frost we saw in the Esperance region last year.

"Through genetic improvement we can make significant improvements in a crop's ability to tolerate certain stresses, such as drought, which can really hinder grain production."

As a young crop scientist, Mr Watt said he believed the viewpoint of the experts that climate change is very real, but that the focus now needed to be on how much we can improve the climate resilience of future crop varieties.

Growing up on a hobby farm in Harvey, Mr Watt's interest in plants largely came from his childhood, which was spent roaming around orchards and dairies, as well as his cousins' broadacre properties at Wongan Hills.

Mr Watt's father, who worked at the WA College of Agriculture, Harvey, also had a large impact on shaping his career focus.

"My dad is more of a plant man academically-speaking - when we would head up into the bush he would sprout off the names of all sorts of trees and shrubs," Mr Watt said.

"I used to think it was so cool to have all that in your brain, so perhaps it was some sort of conditioning to get me to like plants - it certainly worked.

"A homogenous paddock of wheat, barley or whatever is very satisfying to look at and I wanted to be a part of it."

Not one to sit still, Mr Watts has already won numerous awards and scholarships, including Murdoch University's Three Minute Thesis final, in which he was selected to summarise and present his PhD topic in three minutes at the University of Queensland in Brisbane last year.

"It is super difficult to concentrate what is quite a complex PhD for myself at the best of times to something that can be understood by the layman in only three minutes," Mr Watt said.

"As a barley scientist though, I have the benefit that I can talk about beer being one of the end uses.

"By referring to my research and how it reflects on beer makes it far easier to understand from an audience perspective."

Mr Watts won the Paul Johnston Memorial Award for the best presentation by a young scientist at last year's 19th Australian Barley Technical Symposium and has also been a semi-finalist in the agricultural category for the WA Young Achiever awards.

He has also dedicated some of his time mentoring those younger than him, becoming WA's representative in the Art4Agriculture Young Farming Champion program which aims to educate school children on the agriculture industry.

"The whole notion of the program is to upskill the future leaders of the agricultural industry and enable effective communication to the broader community about our respective industries," Mr Watt said.

"Getting into schools and educating school children about the agricultural industry and the opportunities that exist is severely lacking in WA and with university degrees now far cheaper for agriculture, students need to know about the potential opportunities."

After spending nine and a half years at university, Mr Watt will take some time off when he finishes his PhD in September before starting his career in agriculture.

"Good supervision is something I've had but not everyone does, so I would like to be that shining light," Mr Watt said.

"It would also keep me close to the latest and greatest in research that might become useful in a breeding program, whether it be genetic material or genetic markers - there is a lot of benefit in continuing to be involved in that research."