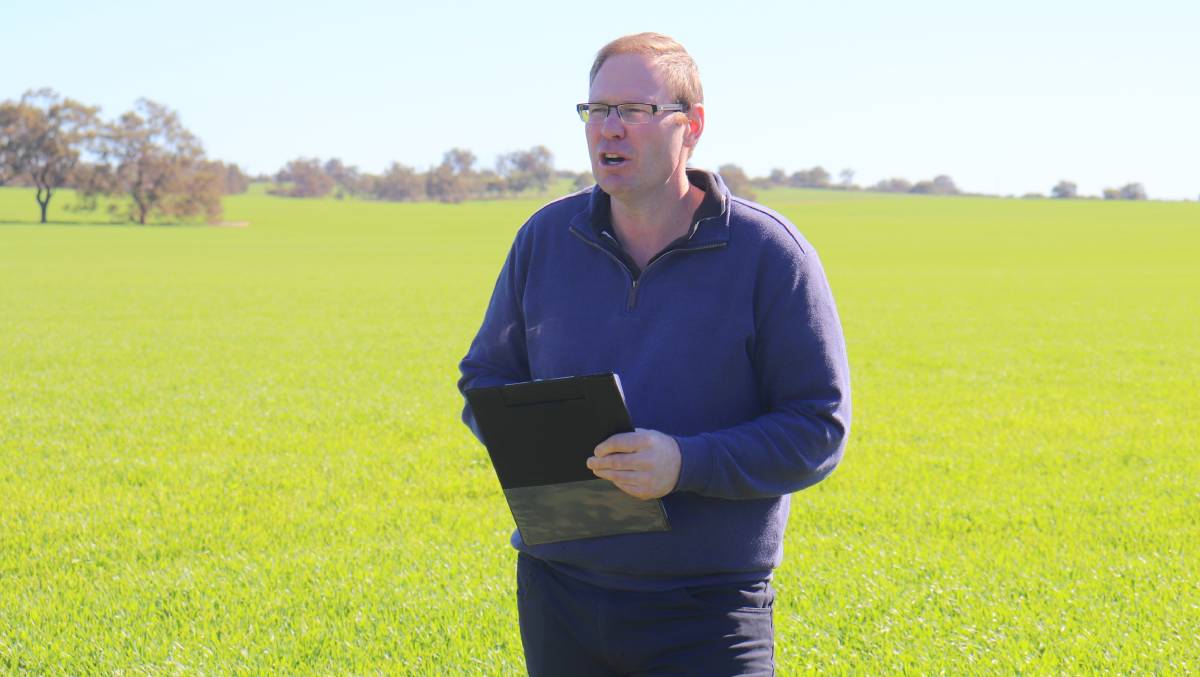 Lupins are commonly grown on the sandplain soils in the West Midlands region.

THE residual nitrogen benefits for wheat following lupins and chickpeas being grown using a range of inoculants is being investigated as part of a trial by West Midlands Group (WMG) and Bayer Crop Science.

The objective of the project, being conducted over 2019 and 2020, is to evaluate Bayer's TagTeam inoculant on the nodulation and grain yield of lupins and chickpeas one year and the residual nitrogen benefits to wheat in the following year.

"Effective nodulation of legumes is important to maximise the amount of nitrogen fixed by the legume," Dr Craig said.

In 2019, a demonstration site was established on grey sandplain soils near Dandaragan that had previously grown lupins, with the past crops four years beforehand, but had never grown chickpeas.

The site was sown to lupins or chickpeas with either granular or dry peat formulations of TagTeam inoculant, with a control consisting of no inoculant also being added.

In 2020 the site was seeded to wheat following the break of the season, with 10 units of nitrogen being applied at seeding and no other applications of nitrogen-based fertiliser since.

Dr Craig said plant available nitrogen was measured by taking soil cores down to 80 centimetres for each treatment on July 2, about six weeks after the break of the season.

"Samples from soil cores in each treatment were bulked together for each layer and a composite sample was taken for analysis of nitrate and ammonium concentration."

From February 19, there was a summer rainfall event that occurred over 10 days, bringing 79 millimetres of rain, with a further 13mm falling outside that event, between January and the break of the season on May 25.

Since the break, there has been 63mm of rainfall, however none of those events have been larger than 10mm.

Dr Craig said the amount of plant-available nitrogen was greater under lupins where dry peat inoculant was applied at a double rate.

"In the treatment that had a recommended rate of peat inoculant added, there was 123 and 131 kilograms of nitrogen per hectare for lupins and chickpeas respectively," he said.

"Where there was no inoculant used in 2019, there was 114kg and 99kg N/ha for lupins and chickpeas respectively.

The chickpea treatment with no inoculant applied indicated that there is about 100kg N/ha available following a non-nitrogen fixing crop for sandplain soils.

In 2019, there were no visible nodules on the chickpeas to facilitate the fixation of nitrogen as there was no prior history of growing chickpeas to provide background inoculum.

In contrast, Dr Craig said lupins were commonly grown in the soil type and there was known to be a strong background of naturalised inoculum in the soil.

"The amount of nitrogen fixed by a legume crop and that is remaining in the soil for future crop production is influenced by dry matter production, legume grain yield and the number and effectiveness of rhizobium nodules to fix nitrogen during the growing season.

"Lupin and chickpea grain yield was about 2.5 tonnes per hectares and 0.9t/ha respectively across all treatments in 2019, while dry matter production was not measured."

In 2019, the effectiveness of the nodulation was not measured, however the presence of rhizobium nodules on chickpeas and lupins were assessed as being greater than 2.8/5 for all treatment, except for the chickpeas with no inoculant.

The combination of these factors determines the amount of legume derived nitrogen to the following crop.

Based on that, Dr Craig said it was worth checking with pre-season and in-season soil and crop testing to ensure the best chance to gain a nitrogen benefit from a legume crop.