Inspired: Tom and Victora Brown were some of the first farmers in the region to adopt precision agriculture techniques. Picture: Supplied

A future-focused mindset and the embracement of precision agriculture underlies the success of a Western Australian grains enterprise which has slowly but sure-footedly expanded over the last five decades.

Let's celebrate the contributions of those whose efforts keep food on our table, a roof over our head, and all of us connected. In this series of articles, we're shining a light on the very people who are keeping the world running.

A future-focused mindset and the embracement of precision agriculture underlies the success of a Western Australian grains enterprise which has slowly but sure-footedly expanded over the last five decades.

Tom and Victoria Brown farm 4600 ha of canola, wheat and barley on the southern coast of the state's grain belt, including on Hill Plains, near Beaumont, which has been in the family since the 1970s. Tom has lived on the land his entire life, working on his family's properties in the Esperance region since he was 15.

Despite a successful expansion strategy, built upon methodically purchasing neighbouring properties to create a high-performing aggregation, and the clear innovation which underlies his work, 63-year-old Tom modestly describes his business as a "one boomspray, one seeder and two header operation".

"I believe that in agriculture, whenever you have the option to expand your land, you do, and the three neighbouring properties around us were good enough to buy and make money off," Tom said.

"They have completely exceeded my expectations."

The Browns were some of the first farmers in the region to adopt precision agriculture techniques, participating in a trial with John Deere around 20 years ago to integrate automated steering into their equipment and to introduce yield mapping.

I draw inspiration from the fact that I can look forward and dream about how I can improve next year. - Tom Brown

"We had our tractors set up for auto steer as soon as we could, to reduce the impact of driver error and to reduce overlap, which also improves the end financial result," Tom said.

"It is constantly being able to upgrade technology that helps to keep me going, and I draw inspiration from the fact that, while I am working, I can look forward and dream a little bit about how I can improve next year."

Given the Browns' proximity to the WA coastline, Hill Plains is a blend of easy to work straight paddocks with a mixture of sandy, clay and reddish soils. These sit alongside salt lakes that benefit from the occasional coastal front which makes its way inland. 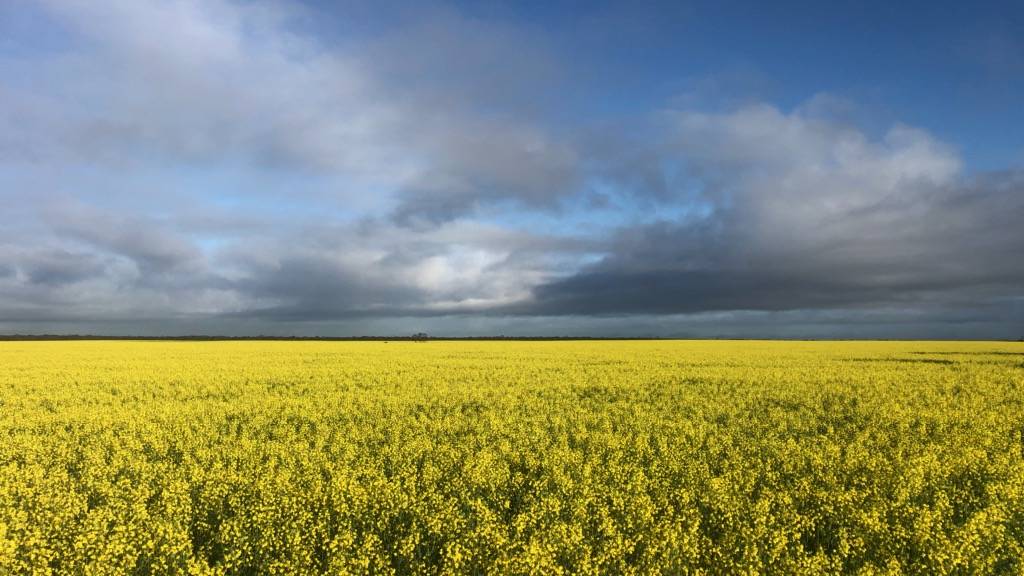 Tom and Victoria Brown farm 4600 ha of canola, wheat and barley on the southern coast of the state's grain belt. Picture: Supplied

However, like much of the rest of the nation, a recent drop in yearly average rainfall from 445 millimetres to unpredictable levels has forced Tom to reassess his approach to key on-farm management functions, particularly ensuring ongoing crop nutrition.

"Feeding a crop is what drives me now, it gives me a lot of interest," said Tom, who has adapted from traditional methods of placing a large dollop of urea on a paddock, to the application of variable rate technology to optimise fertiliser use.

In creating his own base solution of a urea and water mix - placing around ten to twelve units of nitrogen on the crop each time the boomspray is run over the paddock - this soft approach to applying nitrogen helps improve the crop's yield without increasing input costs.

Tom's quest for continual improvement has also led him to approach the global COVID-19 pandemic with a predictive outlook.

While most of the 12,000 tonnes of cereals and 2000 tonnes of canola produced on Hill Plains is forward sold to export markets, the unusual operating conditions presented by 2020 has prompted Tom to consider concentrating more on wheat and introducing a greater diversity of crops to the Hill Plains operation.

"It's ticking over in the back of my mind that I might focus less on barley and more on growing legume crops to sell to a developing Indian market," he said.

This article is sponsored by John Deere.