Nic and Shona Smith with daughters Olivia and Sienna. Merinos have been part of their Wannamal property since 1945.

"You just can't beat the wool produced by a Merino..."

A PASSION for breeding quality fine woolled Merinos at Wannamal runs through the veins of the Smith family.

Merinos have been the breed of choice since the family started farming in the area in 1945 and it's due to the high quality wool they grow.

The passion for the breed continues through the fourth generation of the family - Nic and Clayton Smith.

They operate the 2428 hectare operation alongside their respective families and with their parents Max and Vicki who still play an important part in their sheep operation.

The property has been in the family for 75 years after Max's grandfather, William and his five sons moved from Cunderdin and took up 8094ha of bushland which needed to be cleared.

Over the years the family went their separate ways, but Max remained farming the current home block with his father, Ron and now sons Nic and Clayton.

Today on the original home property and another farm 10 kilometres away purchased in 2018, the family runs 1750 mature Merino breeding ewes, of which 1250-head are mated to Merino rams and 500 to White Suffolk sires, plus 550 ewe hoggets.

Nic said they enjoyed the challenge of being wool producers and producing the best wool possible.

"We have always liked Merinos," he said.

"You just can't beat the wool produced by a Merino and there is always going to be a place in the market for it as they produce a nice, fine stylish wool that can be used in a range of clothing."

While wool is their main focus, meat also plays a role and despite the dual-purpose nature of the Merino they also join a portion of their flock to White Suffolk sires for prime lamb production.

Nic said they had been mating a portion of their flock for prime lamb production for 20 years as it was a good way to produce some extra cash flow during the year.

When it comes to their wool production, given their location in a higher rainfall area, the Smiths aim to grow and sell their wool into the superfine market. 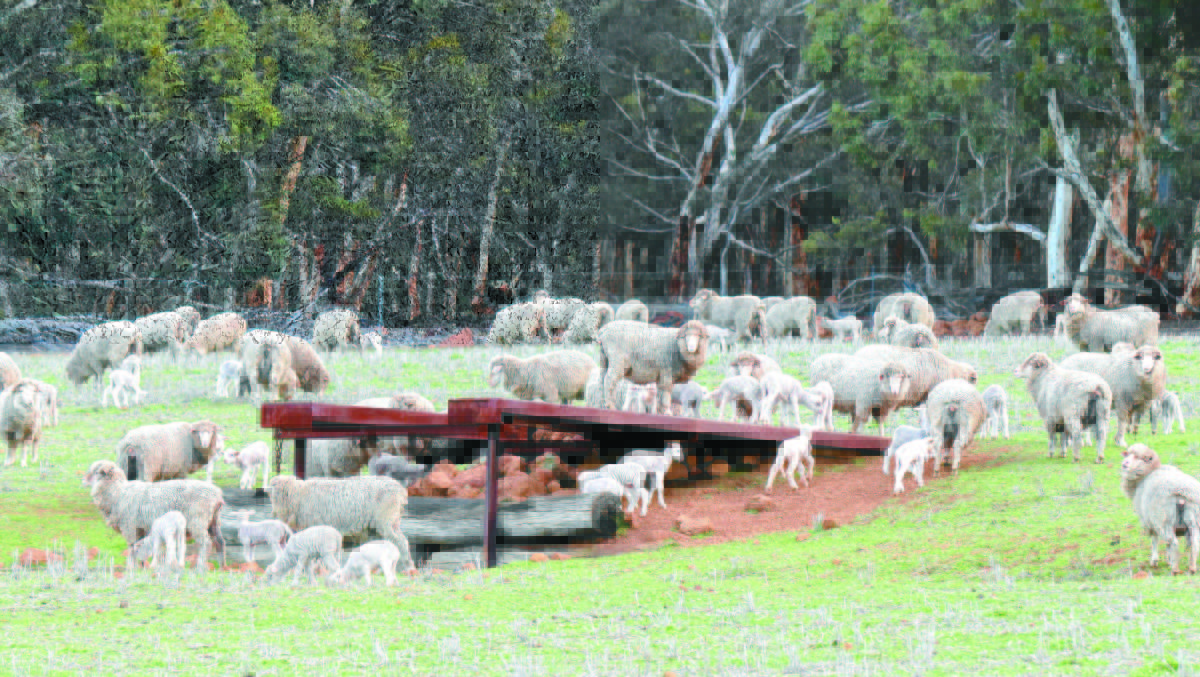 The ewes are joined to Merino rams from the first week of January for five to six weeks to sires from the Rangeview stud, Darkan, for a June lambing.

In terms of wool cut, when they shear in early August the Smiths usually see their adult sheep cutting an average of five kilograms, while their hoggets cut 4.3kg.

However with the decline in wool prices in recent times, the Smiths are keen to lift their wool cut.

"We are concentrating on increasing our wool cut to make up for the decline in prices," Nic said.

"But we have to be careful not to jeopardise our white wool, while trying to increase our cut."

With a focus on the wool side of the enterprise, the Smiths cull, with help of Rangeview stud principal Jeremy King, Darkan, who helps class the family's ewe hoggets, any sheep that have poor wool colour, wrinkle, quality or black spots plus any sheep with a smaller frame.

Depending on how their program is going, they will keep sheep until they are six to seven years old, as long as they are still structurally sound and productive.

Generally, older ewe culls are purchased by a producer at Serpentine, who sought out the Smiths sheep a few years ago because of their high-quality wools, while young culls are sent to the Nutrien Livestock Moora ewe sale in October.

The ewes are joined to Merino rams from the first of January for five to six weeks to sires from the Rangeview stud for a June lambing.

Nic said they lambed in June so it didn't interfere with their cropping activities and to ensure that the lambs were dropping onto green feed.

"We are pretty restricted with the movement of sheep once they've lambed," he said.

"It also means we're not trying to do two jobs at once so we can be more tentative."

Max said they liked the Rangeview rams because they have the bright wool and larger framed rams, while still having low micron wool.

When it comes to their prime lamb breeding flock, they use White Suffolk sires from the Fenwick Farm stud, Calingiri and they lamb earlier in the year in April so they can turn the lambs off earlier to free up paddock space in spring.

For the first time in years, the Smiths pregnancy tested all their ewes and culled any drys this year.

Previously when they scanned their ewes they were not finding enough dry ones to warrant the scanning, but they have returned to it, minimising competition for feed from the dry ewes and giving extra attention to the twin bearing and maiden ewes.

"We decided to scan this year as the money was there, when it came to selling the dry ewes," Nic said.

"It has meant we were able to sell the dry ewes at good prices and as a result they're not eating the feed that could be used for the ones that are in lamb.

"Lamb survival is a crucial factor for us now."

Nic said they were happy with the results of the pregnancy testing this year and were likely to continue doing it into the future.

This year they recorded a pregnancy rate of 126pc of ewes in lamb to ewes joined for their main mob, while maidens are sitting at 92pc so far.

"We used to think that you could run a dry ewe as a wether and get the wool off it and that was OK," Nic said.

"But at the end of the day, doing that now is not really stacking up to where we want to be, so it's better to get them off the farm."

To help increase their lamb survival rates, in recent years they have been lambing down in smaller mobs of 300 instead of up to 450.

When it comes to marketing their sheep, this varies and depends on the season and their ability to get into a market.

Ideally, the Merino lambs are sold into the lighter shipper market or abattoirs after growing them in the feedlot to more than 42kg liveweight, but in the end Nic said it depended on prices.

"It gets to a cut off point where you start to get busy and we need to move them on so we can concentrate on seeding and the pregnant ewes," Max said.

As for their crossbred lambs they try to sell them in October as suckers.

The Smiths believe strongly in looking after and regenerating their pastures and their pasture base is mainly clover.

Balansa and Dalkeith are the two main clover varieties the Smiths use because they complement each other - one is an aerial and one is a runner.

"We add 80pc super to the pasture paddocks to give it a boost and let it get established," Nic said.

This year as another source of sheep feed, they have also seeded some Messina which is a pasture legume suited to wet or waterlogged areas.

Nic said they have sown it in some of the wetter areas on the farm to see how it goes.

During the feed-gap period of the year, the Smiths put their sheep on lick feeders with a 50:50 mixture of barley and oats.

They also feedlot their wethers in March/April to give them an extra paddock to use for their breeding ewes.

Last year was a difficult one with a below-average rainfall, especially in spring and as a result they found that their crop yields, lambing percentages and wool cut were down compared to the previous year.

Nic said the season wasn't easy in 2019 but they were lucky because they had another farm which meant they had more stubbles to run the sheep on so we didn't have to supplementary feed them too much.

"2018 was an exceptional year, then last year we just didn't get any finishing rains," Max said.

While last season wasn't great, the prices for sheep and wool meant the Merino operation continued to perform well.

"Prices for sheep at the moment and in the past couple of years have been really good," Nic said.

"We certainly can't complain, especially when we're getting $7 a kilo for lambs.

"Wool is back from where it was two years ago but still nothing to complain about that's for sure."

Nic said in 2018 they received a record price of 2000c/kg clean for their wool, which was exceptional, so they remain hopeful the wool industry will recover and get back close to these high levels.

"We are certainly very happy at the moment with our Merinos, as our sheep are holding up their end well and truly," Nic said.

The family's confidence in the sheep and wool industry is clear as they have recently reinvested in their sheep enterprise, buying a new sheep handler and resurfaced the yards.

In 1985 the original sheep yards were bulldozed to make way for a new set-up and Max said that although it was hard work, it was money well spent at the time.

What makes their sheepyards unique is that the surface is bituminised.

"I brag to people, you could draft sheep in your suit and tie because there's no dust and it's self-cleaning because it's on the side of a hill, so when it rains they get a wash," Max said.

"They're a pleasure to work in."

This season so far has been encouraging with rain events in March which has resulted in the growth of volunteer wheat and barley which left the sheep in good condition.

"We found the sheep are in really good nick this year," Nic said.

"We tailed our prime lambs the other day and got 100pc, so anytime you're doing that you have to be happy."

As for any future endeavours, Nic said that although they were happy with their current operation they were looking to increase their wool cut and are interested in doing wool weights on the hoggets as a classing tool in the coming years and numbers-wise may increase their Merino mating by 100-200 ewes.