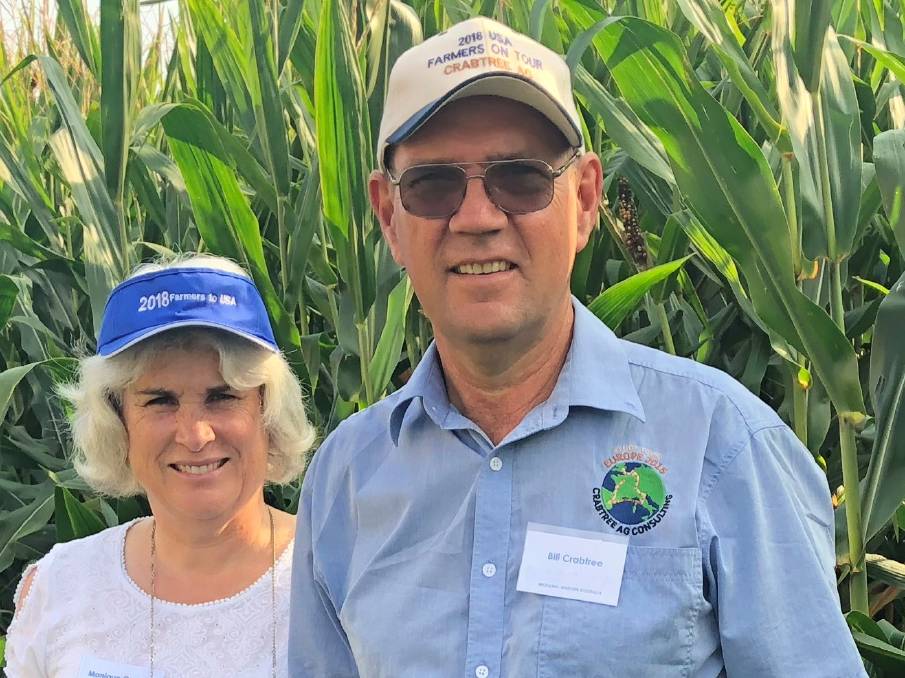 Well-known grain growers Monique and Bill Crabtree have sold their Morawa farm to a family of Pindar. Fondly known as 'No-Till Bill', Mr Crabtree is planning to venture to Africa to share his knowledge on no-till farming. The couple is pictured in front of a 15 tonne per hectare corn crop at Ohio, the United States on a 2018 study tour, which Mr Crabtree said is the yield African farmers should achieve with no-till farming. Photo supplied.

It's the end of an era but the beginning of another for Morawa farmers Bill Crabtree, fondly known as 'No-Till Bill' and his wife Monique.

IT'S the end of an era but the beginning of another for Morawa farmers Bill Crabtree, fondly known as 'No-Till Bill' and his wife Monique.

The couple have sold their 3200 hectare (2800ha arable) cropping farm to a family from Pindar.

The buyers offered the Crabtree's asking price and have similar farming practices and ideals to them, particularly in the power of full residue retention and how sheep deplete residue in marginal regions.

Mr Crabtree said it was a nice feeling knowing the property was going to be run in a similar way.

The Crabtrees also leased another 2800 arable hectares, which the buyer intends to continue leasing.

Although this marks a close to their time farming in WA, Mr Crabtree said he felt really excited for what was to come.

"It feels wonderful because this is the beginning of something really exciting," Mr Crabtree said.

Mr Crabtree is a pioneer of no-till farming in Australia and is renowned in the industry for his knowledge and passion of the practice, which he began researching in 1985.

His no-till work has taken Mr Crabtree all over the world as he loves to share his knowledge with others to help them improve their farms.

And it's the reason they decided to sell - so they could focus more of their time towards helping farmers in less developed countries improve their soil and grow higher yielding crops to feed their people.

"Monique and I actually had the same thought to sell the farm separately on the same day, so it felt right," Mr Crabtree said.

Motivated by their strong Christian values and a desire to help others who are less fortunate, through their company Arise African Agriculture, Mr Crabtree is expecting to venture to Africa in January and his wife will continue working as an education leader for the Esther Foundation, Kalamunda, for some time.

Mr Crabtree said they will still reside in Perth when they are not travelling.

He plans to go to the Congo areas, Tanzania, Kenya, Ethiopia, Zambia and probably Mozambique, Malawi, but starting in Burundi.

"I don't know exactly how it will unfold but I'll start in one place and work on large projects as I go around," he said.

Over the years Mr Crabtree has established contacts with people - as friends, other farmers and government officials - which will aid his journey.

"It is a faith journey - we want to teach African farmers about GM crops, no-tillage etc.," he said.

"There is 60 times more arable land in Africa than there is in Western Australia, yet Africans are starving.

"African farmland is similar to WA - they are the land of droughts and flooding rains like us, so there is an opportunity there to help them.

"Africa has smart phones, smart cars but it doesn't have smart farming because it is very difficult to get the resources to make it work."

Mr Crabtree expects to concentrate on corn and soybean crops in Africa and maybe some wheat.

"I am hoping to get GM crops up and running there because then barely any chemicals are needed," he said.

"When the farming system relies on tillage it destroys the soil structure and makes it too boggy or too hard," which are the type of soils Mr Crabtree is expecting to work with.

Through his already-established government relationships, the Burundi government has provided Mr Crabtree with some land to farm, but he is really passionate about making sure the benefits that come from farming it involve the local people.

He's also prepared to use some of his own funds to get things up and running, but would prefer it came from the farming operation that he helps develop, that way the local farmers will be more invested and have a sense of ownership.

Profits will also be used to continue the work in other areas to educate more farmers.

And Mr Crabtree's work will also be involved with local Christian groups, with which he has already developed relationships.

"We are confident that the people of Africa are ready to embrace new agricultural technologies and move away from hand-outs," he said.

"The use of modern commercial farming, where investors' motives are to lift agricultural productivity is central in this approach."

As well as being a key no-till advocate, Mr Crabtree has also been vocal on the global criticism of glyphosate.

He claimed the speculation that glyphosate could be harmful could lead to "a catastrophe for Australian agriculture" and said the criticism was not based on reputable, peer-reviewed science.

"The chemical doesn't stay in the soil for long and the breakdown products are nitrogen and phosphorus fertiliser, albeit in very small amounts," he said.

Mr Crabtree's family is steeped in agricultural history, with his great grandfather taking up farming in Victoria in 1896.

His parents moved to Wyalkatchem and later Pemberton for about 10 years, lost cows to selenium in the 1950s and his dad James helped discover its role in animal health.

Mr Crabtree was born in Pemberton and when he was 2-months-old, the family took up a war service block at Gairdner.

Throughout his career, Mr Crabtree said he had particularly enjoyed seeing change through no-till.

"Seeing that change is possible and seeing people embrace change for the better has been a real highlight of my career," he said.

"One of the most challenging aspects was trying to break through with change - some people are more resistant to change and others embrace the change."

Being an out-of-the-box thinker, Mr Crabtree said while his work has been very rewarding, the WA agricultural department at the time was not in favour of no-till.

In the meantime, until he ventures to Africa, Mr Crabtree is spending time in the Kimberley and Fitzroy areas and said he "might give a helping hand to get the Looma community into farming before flights to Africa open up".

To farwell the WA farming community and celebrate his 60th birthday, the Crabtrees will be having a party on their Morawa property on Saturday, September 12.

"Anyone who knows us and wants to say goodbye is welcome," he said.