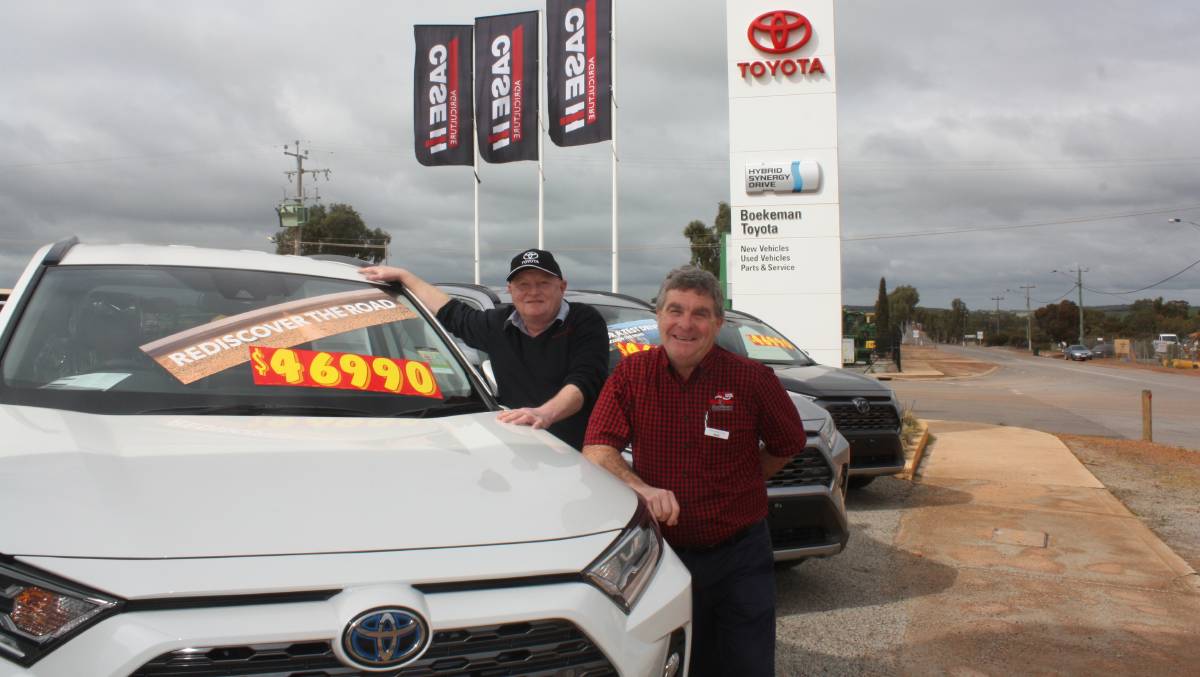 Farm Weekly was kind enough not to push for the 'Toyota leap' from Boekeman Machinery Toyota general manager Brian Drinkwell (left) and parts manager Steve Clark last week. The pair was keen but any unforeseen injuries might have been sheeted home to Torque.

Toyota was "on the same page as us" in focusing on customer service.

BOEKEMAN Machinery is approaching almost 40 years as a Toyota dealership which is a significant milestone given the struggles to operate a car dealership in a country town.

Servicing Wongan Hills and Dalwallinu, dealer principal Stuart Boekeman said Toyota was "on the same page as us" in focusing on customer service.

"Toyota is the number one motor franchise in Australia but we took on the franchise because of the company's attitude to supporting the country community," Stuart said.

"We felt we could provide a service by taking on the franchise."

The big plus for selling Toyota, says Stuart, is the Toyota Service Advantage.

"And it's a very popular with customers."

According to the dealership's general manager for Toyota new and used sales, Brian Drinkwell, there's a solid customer base and a lot of loyalty.

"We get many repeat buyers and people are genuinely surprised when we tell them we can generally match or better deals offered by city dealers," Brian said.

"We certainly punch above our weight.

"And I treat customers the same way I want to be treated when purchasing products and services."

Brian joined Boekeman Machinery in 1997 at its Dalwallinu branch in the parts department then transferred to Wongan Hills in 2001 for a stint in parts before moving to the service department.

In 2007 he took on the role as salesman for Toyota new and used vehicles and in 2010 was appointed general manager of the division.