A pest never before seen in Western Australia has been detected on the south east coast of the State. 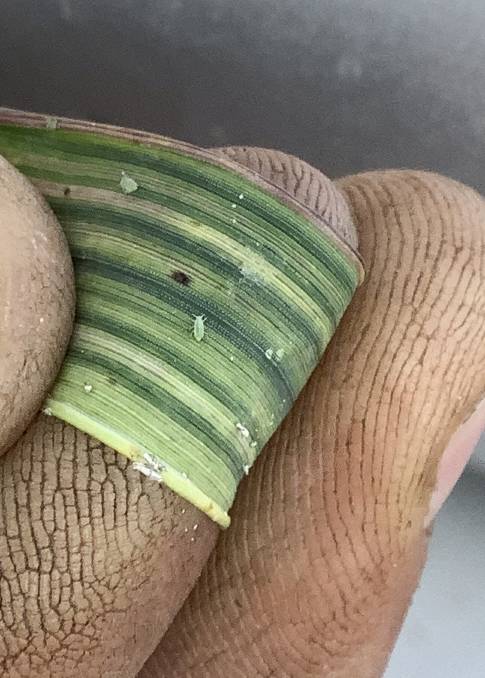 Discolouration and streaking on a wheat leaf caused by the exotic cereal pest, Russian wheat aphid.

A PEST never before seen in Western Australia has been detected on the south east coast of the State.

A sighting of Russian wheat aphid, which was discovered in South Australia in 2016 and subsequently in Victoria, parts of New South Wales and Tasmania, has been confirmed in two wheat crops north of Esperance.

Grain growers and consultants have been urged to survey cereal crops and grassy weeds for aphids and report any activity.

As it is difficult to distinguish between aphid species, landholders and consultants are encouraged to report all aphid activity via the Department of Primary Industries and Regional Development's (DPIRD) MyPestGuide Reporter app.

DPIRD chief plant biosecurity officer Sonya Broughton said they had been working with industry to ensure it was well prepared in the event the pest was found in WA.

"Department officers have been working with stakeholders and the broader research community across Australia over several years to minimise the impact of this pest, as it has become broadly established across Australia," Dr Broughton said.

"A lot has been learned from the research and growers' experiences interstate about how cereal crops respond to Russian wheat aphid and how best to manage the pest.

"Crop monitoring by landholders and delimiting surveillance by the department will help us to determine the extent of spread of the pest in WA and what actions are required."

The National Management Group, comprising all Australian governments, Grain Producers Australia and Plant Health Australia, determined in 2016 that the pest was not technically feasible or cost-beneficial to eradicate from Australia.

Eradication in WA is unlikely due to the biology of the pest and its ability to spread on the wind.

The crops where the detection was made will be sprayed to contain the pest, while further surveillance is undertaken.

Dr Broughton said inspecting the edges of wheat, barley and oat crops, where pests often colonise first, or where plants are under stress and looking for damage near the base of newly emerged leaves was most effective.

"Symptoms could look like herbicide, thrips, mite or wheat streak damage," she said.

"Look for a noticeable loss of green colouration across the crop and, on closer inspection, white, yellow, purple or red streaking, leaf curling, stunted plant growth and loss of vigour."

As Russian wheat aphids are only about two millimetres long, pale yellowish green with a fine waxy coating, a hand lens or smartphone macro lens may be useful.