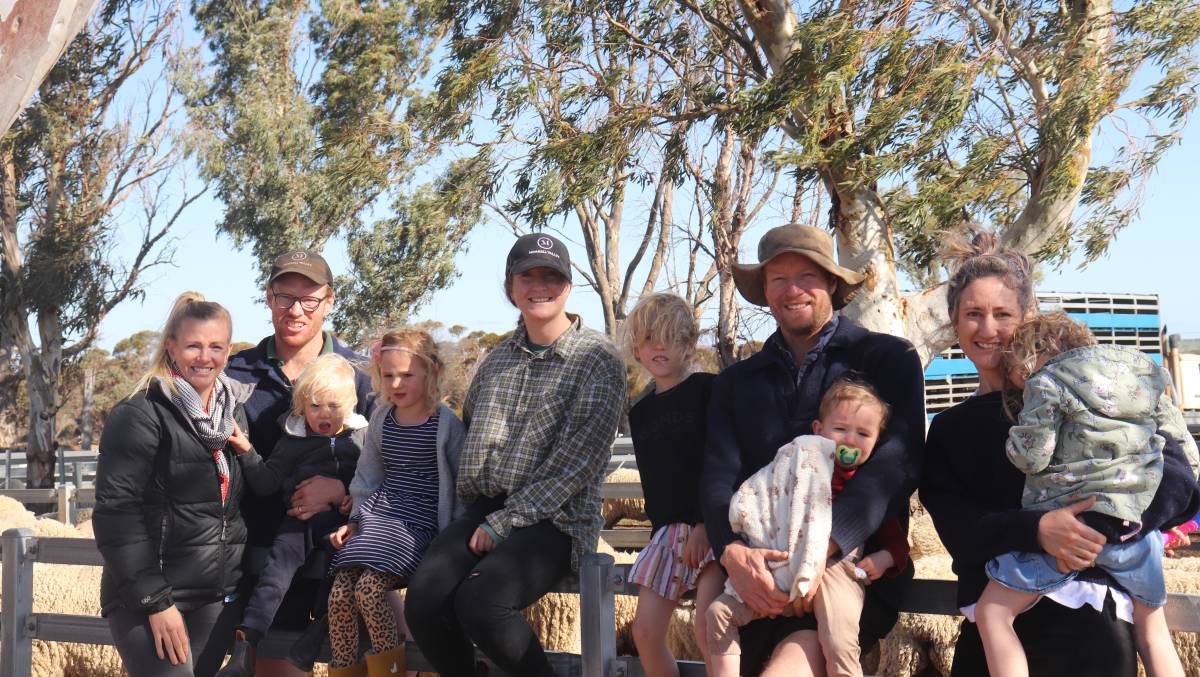 "We also see the Merino as easy to manage & we run ours as a low maintenance flock."

AFTER time away from the family farm Hyden brothers Josh and Tim Whitwell have returned and are committed to rebuilding their Merino enterprise.

The Whitwell family started farming on the property in 1963 when Josh and Tim's grandparents Paula and David Whitwell moved there from Kellerberrin.

While remaining keenly interested in the ag industry, both brothers spent time off-farm, a move that was supported by parents Garry and Wendy.

In their time away the boys travelled and studied but also worked in other industries, such as building and tourism.

These enriching experiences taught them many valuable lessons that they were able to take home.

Following succession planning in 2016 which allowed for all three Whitwell brothers (Craig, Josh and Tim) to continue farming, Josh and Tim now run their own family enterprise under the new banner Morrell Valley.

The focus is on grain and livestock, in partnership with their wives Stephanie and Mara.

Both Mara and Stephanie are involved in the business and have agricultural backgrounds.

Mara has a degree in animal production while Stephanie, who is a trained nurse, grew up on a farm at Mount Walker.

Merinos were a part of the original family operation up until 2011 when the family decided to disperse its breeding flock of 2500 ewes and concentrate on the grain side of the business.

The stock were dispersed at the WALSA Katanning June Special Sheep Sale, with the ewes making up to $170 a head. The Whitwells have started shearing some of their Merinos, with their main shearing occurring in August.

Despite the dispersal Josh was still keen to run a few Merinos so he purchased a mob and ran them as a personal investment for five to six years.

When the brothers started the new enterprise they decided to build up a new breeding flock.

In the past few years they have upped their ante and purchased in some ewe lines to quickly build up numbers, including paying up to $200 for ewe hoggets a few years ago when those type of prices were unheard of.

Numbers have increased to a point where they now have a 4700-head self-replacing Merino ewe flock and are on their way to having 6000 breeding ewes in coming years.

To help with the growing flock, Emily Stahan was employed and despite having plenty of breed choice, they opted for Merino for its dual-purpose attributes, saying the wool and meat side were equally important.

Josh said the good thing about Merinos was when wool was doing poorly they still had meat and vice-versa. 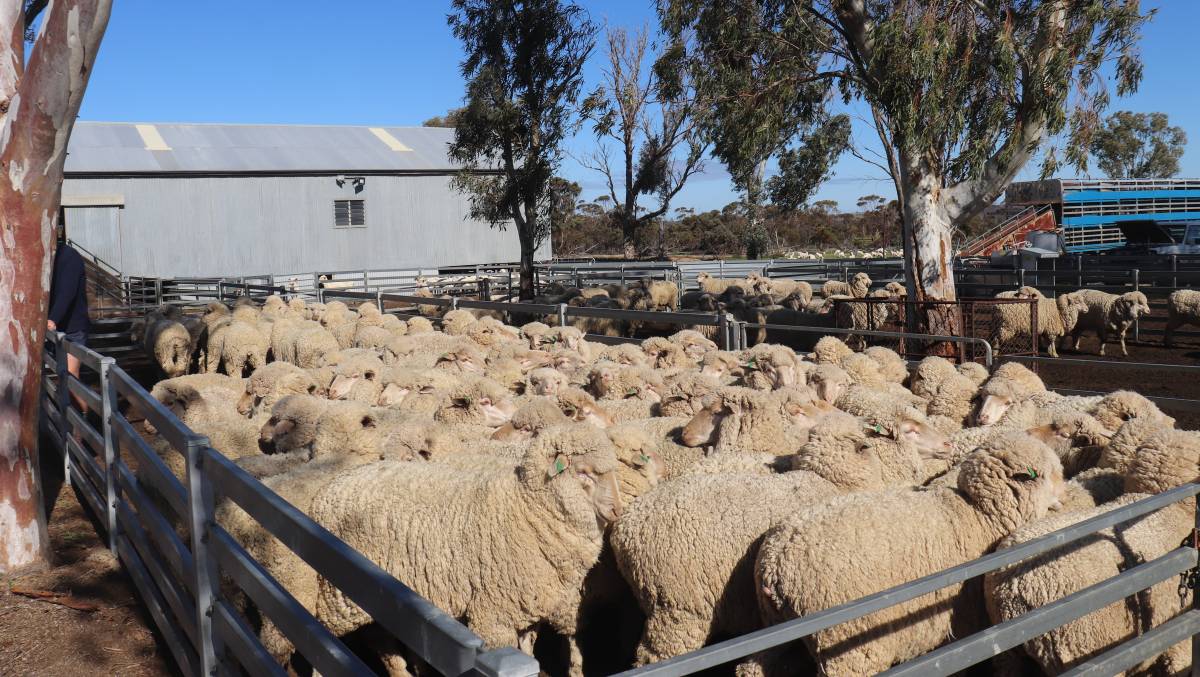 The Whitwells run a 4700-head, self-replacing Merino ewe flock and have an aim of running up to 6000 breeding ewes in coming years.

"We also see the Merino as easy to manage and we run ours as a low maintenance flock," Josh said.

Joining on the property occurs in November for six to seven weeks, resulting in about a six-week lambing from April and then they are big enough to wean when shearing in August.

The earlier lambing also allows them to take advantage of early markets.

But Josh said there was one main disadvantage of lambing in April and that was it was a high-pressure period due to the autumn feed gap.

"It is a tricky time to manage feed," Josh said.

The rams are sourced from Stephanie's family's Crichton Vale stud at Mount Walker.

On the ewe side, the Whitwells class their ewe hoggets annually with the assistance of Elders stud stock representative Nathan King.

Josh said when they first started rebuilding their flock they weren't too selective at classing time as they just wanted numbers.

"But now we have our numbers close to where we want them to be, we are starting to class a bit harder," Josh said. 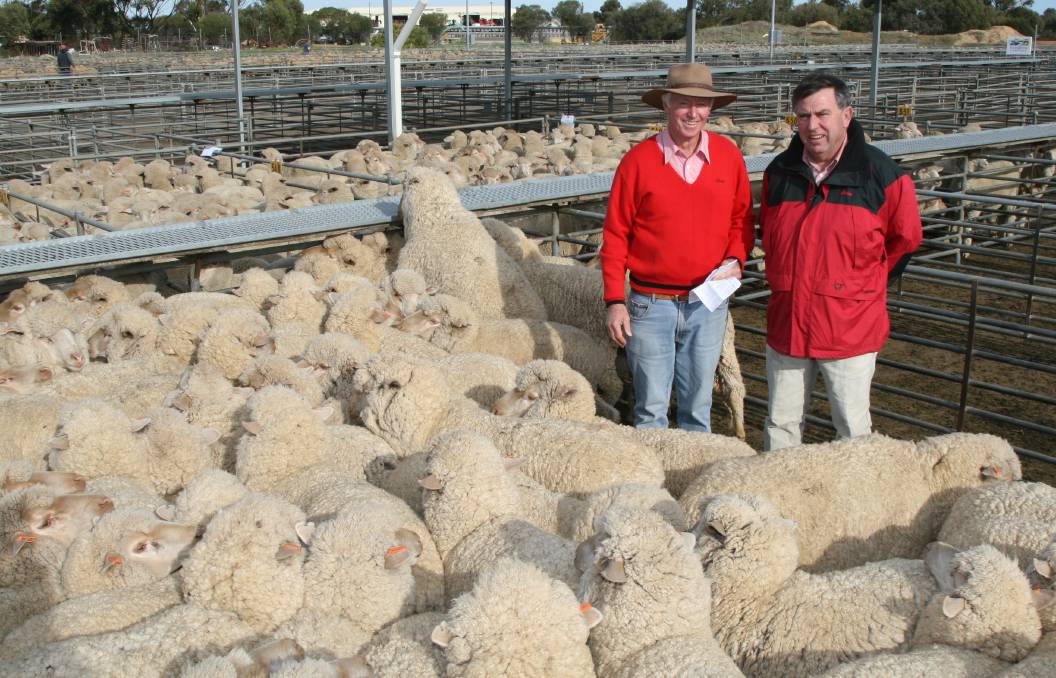 In 2011 the family decided to disperse its breeding flock in the WALSA Katanning June Special Sheep Sale. Back then Elders Kondinin agent Bob Peake (left) and Elders Jerramungup agent David Halleen were pictured with this line of the familys 268 one-year old, August shorn, Rutherglen blood ewes.

"We have started to cull for frame and wool quality in the hoggets and we are also getting rid of any older sheep that aren't up to scratch."

As a result of their strict selection criteria this year they culled about one third of their ewe hoggets.

"We are probably only just at the point where we can be that hard now," Josh said.

"Our aim is to breed a large-framed Merino ewe which will cut 7-8 kilograms a head of 19-20 micron wool."

At shearing, last year the Whitwells produced 213 bales of wool with their ewes cutting about 6-7kg a head of 19 micron wool.

In terms of the position of the wool and sheep markets in the past couple of years, Josh said that meat/sheep prices had been very good but they would like to see the wool market being a bit stronger.

"Wool has dropped in the past year but on a 10-year average it's still pretty good," Josh said.

"You do expect markets to move up and down and I think that is what the wool market is experiencing.

"Given the prices of the past couple of years for both wool and sheep, we haven't been disappointed that we decided to go back into sheep."

When it comes to selling their stock Josh said they tried to be flexible with the markets they sold into and let their stock agents guide them to get the best prices.

Over the years the Whitwells have sold their wether lambs into the air freight market, live export, local feedlotters and to the Eastern States.

Like most producers across WA they haven't been immune to the past couple of dry years and as a result have been busy feeding their sheep.