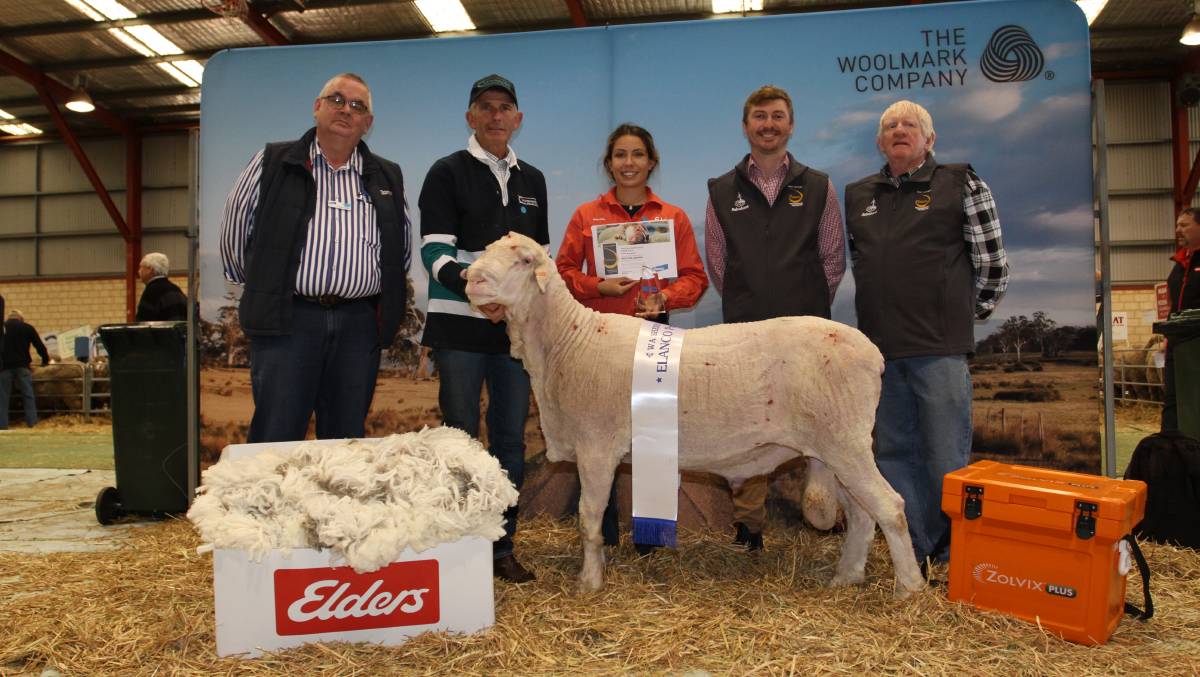 There were 3 rams & 7 ewes judged in this year's competition.

ATTRACTING a crowd was this year's Elanco PROram and PROewe competition held at the WA Sheep Expo & Ram Sale at Katanning.

Stud breeders and onlookers watched on as the rams and ewes were judged in the wool, before being shorn and judged out of the wool, with their body weight and fleece weights being recorded, plus fleece evaluations completed.

There were three rams and seven ewes judged in this year's competition, which goes a long way to recognising the animal with the best production traits, by judges Craig Jackson, Westerdale stud, McAlinden and Fred Leo, Leovale stud, Lake Grace.

Finally after all the numbers were crunched it was the Campbell family's Coromandel stud, Gairdner, which came out on top and won the PROram title, while the Crosby family's St Quentin stud, Nyabing, finished on top in the PROewe.

The Coromandel ram received a total of 606.25 points out of a possible 650, placing just five points ahead of a ram from Seymour Park, Highbury.

When weighed, the Coromandel ram came in at 142.5 kilograms and achieved the maximum points for the section 100/100 points.

Although it scored highly across most sections, its best results were in the constitution/conformation in the wool scoring 38.5 out of 40 points and wool quality/coverage section were it achieved 55 out of 60.

When its fleece was valued by the judges it recorded a commercial fleece value score of 235.5 points out of 250 after the fleece was assessed to have a value of $106.34.

Mr Jackson said the Coromandel ram was a big modern-day sire, with nice free growing wool and a good head.

"He is a good looking ram," Mr Jackson said.

The Coromandel ram is no stranger to awards - at this year's Make Smoking History Wagin Woolorama it was sashed the champion two-tooth ram. The ET-bred ram is by Nerstane Derek, which is a son of Willandra Desmond and out of a Rhamily Benny daughter.

The Seymour Park ram's fleece weighed 15.4kg, which was the heaviest of the three ram fleeces.

Third in the class went to a ram from the Wililoo stud, Katanning that scored 566.95 points.

It had the highest score for constitution/conformation out of the wool with 46 out of 50 points.

In the ewe section, 42.75 points separated first and second place with a St Quentin Merino ewe claiming the title.

In the competition, it scored maximum points for commercial fleece value recording 250 out of 250 points after its fleece was valued at $107.61.

It had a bodyweight of 110kg, making it the heaviest of all the ewes, which helped it achieve maximum points of 100 out of 100 points for the section.

Mr Jackson said the St Quentin ewe was well rounded, with a good head and was beautifully barrelled.

He also said the ewe had an exceptional weight.

The ewe had also claimed another title this year - it was sashed the supreme exhibit at Woolorama.

The ET-bred ewe is by Kamballie 1693 and its dam is sired by East Mundalla Jonty and out of St Quentin 406, which was the stud's supreme exhibit at the 2013 Woolorama.

Finishing second in the PROewe class was a ewe from the Darijon stud, Narrogin, with a score of 594.5 points.

Third place in the ewe class went to a ewe from the Seymour Park stud, which scored 587 out of a possible 650 points.

This ewe weighed 98.5kg, while its 19.3 micron, 73pc yielding fleece weighed 13.5kg, making it the heaviest of all the ewe fleeces.