The stud recorded a 97% clearance for the 120 rams offered. 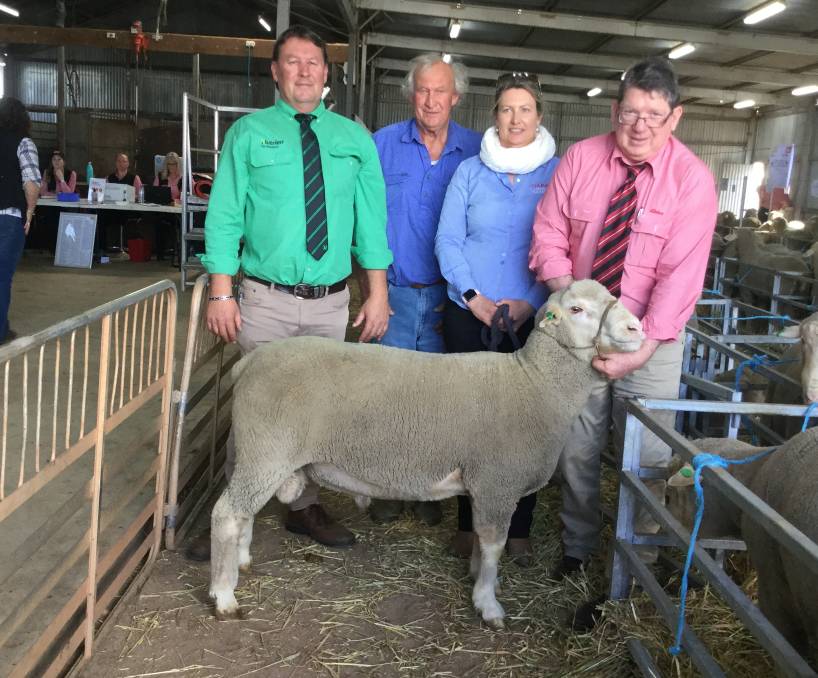 A QUALITY line-up of well-grown Prime SAMM rams showing both excellent carcase and wool traits and strong buying support was the perfect combination at the recent Tiarri/Uralla on-property ram sale at Lake Grace.

With solid demand for the rams on offer from a long list of return buyers, despite some in the local area again suffering the effects of dry season, the stud recorded a top price of $2800 twice and a 97 per cent clearance for the 120 rams offered.

When the final ram had been knocked down by Elders auctioneer Preston Clarke, the 22 registered buyers from as far north as Walkaway and east to Moorine Rock, had cleared 116 of the 120 rams offered under the hammer at an average of $1045, ensuring a pleasing sale result for the Tiarri team.

Elders stud stock manager Tim Spicer said overall it was a very solid sale and a pleasing result for the stud on the back of what had been a tough season in the area which has seen a significant number of ewes sold off due to water shortages.

"Overall it was a quality line-up of rams from lot one to 120 and the rams presented were a credit to the Tiarri team given the tough season they have come through," Mr Spicer said.

"The rams again displayed the carcase traits the stud is renowned for, while the wools were also very good and showed the work the stud has done in recent years in terms of improving its wool quality.

"As a result of the quality line-up throughout, prices followed suit and were consistent throughout on the back of not only local buying support but also buyers from out as far as the eastern Wheatbelt.

"Like in past years there was once again a large number of regular clients operating in the sale and some purchased more rams than normal."

Equally happy with the sale result was stud co-principal Kelly-Anne Gooch who said the Tiarri team was very pleased with the final sale result and how the rams presented on sale day.

"Once again we had good support from our regular clients who all realise the benefits the Prime SAMM breed brings to their sheep flock," Ms Gooch said

"It's great that producers have confidence in the dual-purpose Prime SAMM breeding," Ms Gooch said.

"The breed gives producers options in terms of marketing their stock and when it comes to climate variation within the growing season.

"The lambs don't run too fat so you can watch the market and sell them early or late, or you can keep the ewe lambs to mate or sell as breeding ewes.

"With the added option of mating the ewe lambs.

The $2800 top price was recorded twice in the sale and on both occasions it was return buyers of eight years the Cobley family, R & R Cobley & Son, Walkaway, that was called out as the buyer.

An upstanding sire in lot three was the first ram to sell at the $2800 price tag to the Cobleys.

The 117 kilogram ram was sold with wool tests of 21.4 micron and 99pc comfort factor (CF), while its scan figures from August were 46mm eye muscle depth (EMD) and 4.4mm fat.

Both rams were dropped in June 2019 and were raised as twins.

"They were also twins which is really important to us as we have a strong emphasis on fertility in our flock and we try to buy rams which are reared as multiples," Mr Cobley said.

The family will use the rams in a small nucleus flock to breed rams for their 2000-head pure Prime SAMM ewe flock.

Mr Cobley said they made the switch to using Prime SAMM rams in the early 2000s over Merino ewes and upgraded to a pure Prime SAMM flock from there.

"They are good, strong doers and handle the tough conditions really well.

"They are also very fertile, this year we achieved a 168 per cent lambing to ewes joined."

When it comes to the Tiarri sheep, Mr Cobley said they continued to buy a couple of rams each and they liked the stud's sheep as they were good solid rams.

The second top price in the sale was $2300 paid by repeat buyers IF & KM Walker, Newdegate.

The Walkers finished the day with another four sires to their name to take home a ute load of five rams at an average of $1600.

The third highest price in the sale was $2200 paid by regular buyer TR Major, Muntadgin, which also secured two other sires at $1100 and $800.

Two other buyers bid to $2000 for single purchases.

The volume buyers in the sale were return clients Rod and Lisa Jackson, Rodenway Trust, Moorine Rock, who purchased 34 rams to a top of $1100 and an average of $697.

Mr Jackson said they had purchased from Tiarri for the past eight years and like the stud's rams because they were good, big-framed, easy-care sheep.

"We like the Prime SAMM breed because they are hardy and can handle the tougher conditions of the eastern Wheatbelt," Mr Jackson said.

"You can also turn off their lambs quicker, which is something we are always trying to achieve as we don't want to carry them through and another bonus is they don't run too fat."

The Jacksons purchased more rams than they normally do this year as they have made the decision to mate all their ewes to Prime SAMM rams going forward.

"We usually mate about 2800 Merino ewes, with 50pc going to Merino rams and 50pc to Prime SAMMs but we have decided going forward to mate everything to Prime SAMMs," Mr Jackson said.

The operations starts lambing at the end of May and the aim is to turn off as many lambs as suckers straight off their mothers at 20-21kg carcase weight before the end of spring.

Any lambs that aren't sold are carried through and put through a feedlot on the property prior to sale.

Last year's volume buyers the James family, FS & KM James, Hyden, was the second biggest buyers of the day, securing a team of nine rams at an average of $1067 and to a top of $1300 twice.