LEWISDALE celebrated the 70th anniversary of the stud with an emphatic result at its 57th annual on-property ram sale at Stud Park, Wickepin recently.

The stud defied global uncertainty and seasonal challenges to produce one of the sales of the selling season thus far with a total clearance of 220 lots grossing more than half a million dollars.

Lewisdale presented another shed full of thumping dual purpose Poll Merino rams (and a small selection of Merino rams) which had Lewisdale's loyal band of clients, many dating back decades, spoilt for choice.

At the end of selling, the Dyson Jones team, led by AWN auctioneer Don Morgan, had notched up a $2349 average for the impressive 220 lot-catalogue.

The overall average dipped marginally by $107 compared to last year's sale where all 240 lots sold to average $2456. 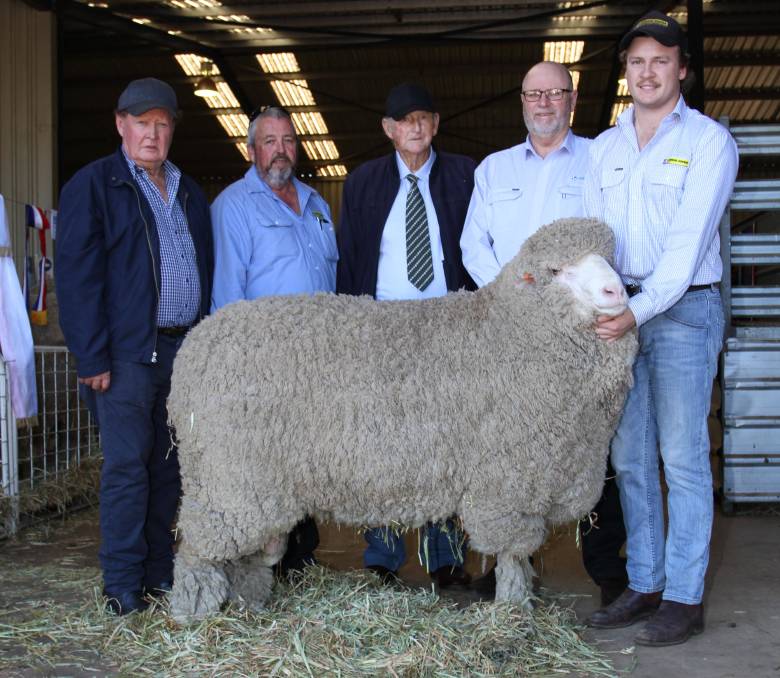 The offering of half semen shares in the next generation of emerging Lewisdale sires has been a highlight at recent sales and this year's sale didn't disappoint.

Topping this year's sale was a share in Lewisdale Polly 450 for $21,000 purchased by Andrew Kitto, Dyson Jones, for an undisclosed buying syndicate.

A share in Lewisdale Trump 26 sold for $16,000, also purchased by Mr Kitto for Advanced Genetics, Beverley. Other buyers to operate at the top end of the market included 35-year Lewisdale clients Fenton and Rebecca Dean, Sancta Monica Farms, Tardun, who collected 16 rams at the sale at a $2814 average, with their $5000 top price paid for a 137kg 2018-drop March shorn stud Poll ram by Monty 10 with tests of 20.4 micron and 99.7pc CF.

The Dean family runs 3500 Lewisdale blood ewes, 2500 mated to Lewisdale rams and the balance to White Suffolk rams, and first started sourcing Lewisdale rams when the stud held a sale in Geraldton.

Mr Dean said their sheep enterprise was integral to their farming operation and the constitution and conformation of the Lewisdale sheep was suited to the northern Wheatbelt area. "We shear three times in two years and the Lewisdale genetics help us achieve this," Mr Dean said.

"They are heavy wool cutters and the sheep are hardy - they get around big paddocks and handle our summers.

"We are having a pretty good season this year but have relied on our sheep to carry us through recent drought years."

A number of buyers built significant teams of Lewisdale rams every year at the sale and none more so than long-time Lewisdale supporter since the 1970s, Joe Della Vedova, JLW & C Della Vedova, Esperance.

Also long-time Lewisdale clients for at least 45 years, the Della Vedova family, Kumbooran Plains, Narembeen, returned this year for a team of 11 rams for a healthy average of $2614 which included the $4000 equal top price paid for a Merino ram, a 137kg 2018-drop March shorn ram by Monty 10 testing 20.5 micron and 99.2 pc CF. The Della Vedovas run a traditional summer shorn Merino enterprise of 3000 Lewisdale blood Merino ewes where they carry a couple of lines of wethers through for two years for wool production.

Charlie Della Vedova said the performance of Lewisdale breeding in their operation can't be disputed.

"At the end of the day there is no better studmaster with the knowledge for breeding the right type of sheep," Mr Della Vedova said.

"The proof is in the pudding and there is depth through the line-up of rams.

"Frame, size and the type of sheep we need with the right wools and this shows with the consistency in type we are breeding at home.

"You come to Lewisdale for the product and it's a pity some people knock Ray."

Other long-time Lewisdale client accounts include one of the stud's oldest clients of 54 years, DP Dunbar & Co, Southern Cross, with nine rams paying from $1500 to $2000 and AH Chisholm & Co, Needliup, with seven rams averaging almost $3000 and paying to $4000 on two occasions.