Don Stewart operates a 800-cow drylot at Yarrawalla north of Bendigo in Victoria.

Agriculture Victoria and Dairy Australia data shows a trend towards intensification of the dairy sector as farms move away from traditional grazing systems.

There was always something alluring about the American dairy industry for Don Stewart.

As a child, he was keen to emulate the farm businesses which made up one of the largest milk producing nations in the world.

The US industry size and scale was mesmerising.

Cows ate prepared rations, delivered to them from nearby paddocks.

Housed in barns, these animals were sheltered from all the elements - snow included.

Unlike the herds traipsing from the dairy to the paddocks in Australia, the US cows didn't graze. Some rarely left the barn.

A world away at his family farm at Yarrawalla north of Bendigo in Victoria, Don would immerse himself in this foreign industry through the pages of Hoard's Dairyman.

This famous US magazine provided glimpses of housed-cow dairying to farmers across the globe.

Flicking through these pages planted a seed - an idea that would go onto underpin the future direction of Stewart Family Farms.

Decades later, Don and his wife Meg were at a crossroad.

Unsure if they wanted to continue in the industry, a business course provided them with the vital outside perspective they needed to develop a new business plan.

Their strategy included a minimum five-year commitment to dairy and a focus on making their Yarrawalla property "investor ready".

Underpinning this open and flexible goal was the need to adapt their farm to the changing business and environmental climate to secure its future.

Fundamentally, they knew grazing their 800 cows at Yarrawalla was no longer a sustainable farming model.

They also understood that any capital investment needed to stack-up economically, add value and flexibility to their existing operation.

So, it was no surprise - following a trip through the NSW Riverina visiting drylot dairy farms in June 2019 - Don was on Google Earth inspecting dairies in the USA.

In January this year, work commenced on the Stewart's 800-cow drylot.

"Basically, we copied Arizona and Texas," Don said. Adding he's not a fan of "reinventing the wheel".

"We started off thinking we would build a compost barn," Don said.

"But the capital outlay for a compost barn is double or a little more than double compared to a drylot.

"If we were younger, we probably would have gone for the compost barn, but this has a lot quicker payback period.

"In five years, we are hoping to pay it off, it buys us a bit of time. If the kids are keen, they can build something a bit flasher." 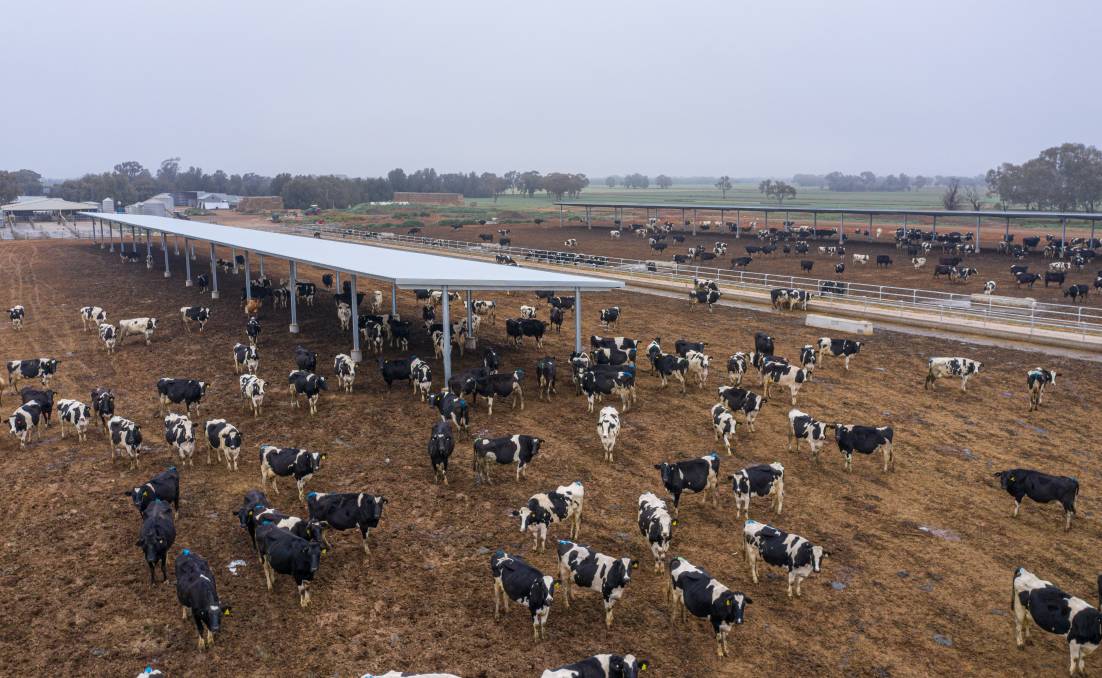 Their "home farm" Mologa, is a 278ha partial mixed ration registered Jersey operation, Jetz Jerseys. Between this farm and the 800-cow drylot at Yarrawalla is 385ha of dryland cropping land and a 64ha irrigation block.

This country - plus the bulk of the 240ha at Yarrawalla - will supply fodder to the dairies.

Up until 14 months ago, Yarrawalla was operated by a sharefarmer who had worked with the Stewarts for six years.

"That farm, it has a state-of-the-art irrigation system," Don said.

"It is set up unbelievably well for irrigating pastures and it has a great laneway system. But we just don't think we can keep doing it that way, down the track.

"(Irrigation water) prices, they come and go, and they will go up and down, but you can't build a business model around the volatility of the water market and allocation. That's why we committed to go with a feedlot," he said.

Agriculture Victoria and Dairy Australia data shows a trend towards intensification of the dairy sector in recent years as farms move away from traditional grazing systems.

More than 80 dairy farmers have "actively engaged" with Agriculture Victoria, to move their businesses toward a total mixed ration (TMR) system and eliminate grazing. It said most enquiries were in the past financial year.

This year's National Dairy Farmer Survey, completed by Dairy Australia, suggested 60 per cent of Murray Dairy farms - those in northern Victoria and the NSW Riverina - fully fed their herd without grazing for some period of the year.

Up to 51 per cent of farms did this for three months or longer.

About 4 per cent of the 1217 dairy farms in the Murray Dairy region operate a fully housed cow operation, according to Murray Dairy.

This industry trend has been reflected in a sharp spike in dairy shed construction, according to Entegra design consultant Greg McCalman.

Entegra built up to nine dairy barns in this region during the past year and in September there were 10 'live' projects. A stark contrast to the two-to-three enquires received in this region three years earlier.

Focused on supplying the domestic milk market, the Stewart's said their drylot was the perfect fit for the year-round, flat milk production favored by their milk processor Kyvalley Dairy Group.

The Stewart's drylot operation includes a concrete central feed pad with a 2ha paddock either side.

In the middle of each paddock - on top of man-made hills - are Entegra shade sheds.

The sheds are both 120 metres long by 10.5m wide, have skillion roofs and run in a north-south direction.

"The key to the system is the 10.5m width and the fact it runs north-south," Don said.

"This means that every square inch has to see sunlight every day under that roof. It keeps it dry, but more importantly it kills bacteria."

Protecting the herd from the heat was the main priority for Don and Meg.

With 400 cows in each 2ha paddock, there's plenty of room for them all in the shade, while sprinklers attached to the feedpad reduce the animals' heat load.

Cows can loaf under the shade at any angle and this freedom of movement was one of the attractions to the system for Don and Meg.

They can also easily expand the sheds if required.

This summer will be the first test for their new system, the cows went into the drylot in June.

The Stewarts have calculated their payback period based on production gains thanks to cow comfort improvements an increase in feed harvested and a reduction in feed waste.

Conservatively, Don and Meg budgeted on a milk production increase of 1.5litres/cow/day. They anticipate this would add at least $219,000 a year to their bottom line. 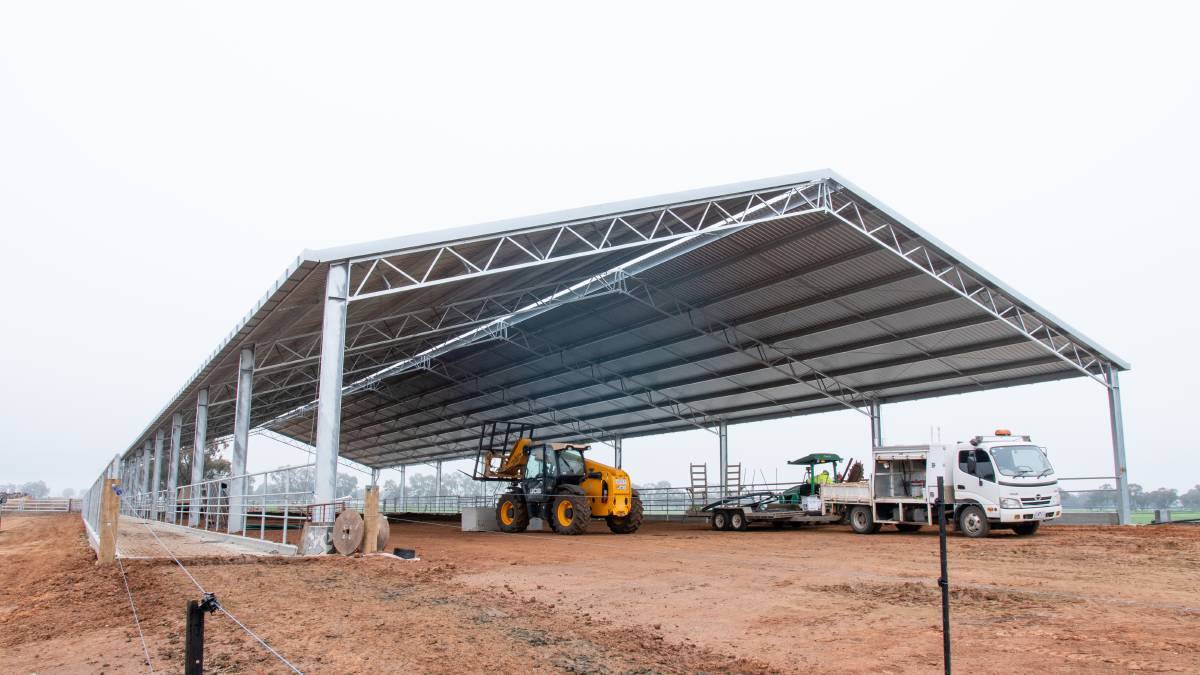 Registered Holsteins, under the prefix of Groveland's, are part of the predominantly black and white herd at Yarrawalla. Average annual production is 650kg of milk solids a lactation/cow- this is at least their bodyweight or more, according to Don.

Maximising feed consumption and production will be paramount, while reducing wastage should also deliver cost savings.

"A large herd of cows, walking them in the paddock with grass, they waste a lot," Don said.

"The big winner will be what we can grow down the paddock. We will have the soil benefits like we have at the dry land cropping block.

"For example, I recently pulled some plants out of there and the soil was full of worms. You go to the dairy farm, where cows have been walking over it to graze - just across the road - and it is like concrete.

"The compaction caused by livestock grazing on our clay soils isn't good for the soil structure."

Don and Meg plan to grow and store up to two years' worth of feed. This would keep them out of the fodder market for the bulk of their requirements during droughts, mitigating their exposure to high prices.

Fertility improvements have also been budgeted. Combined with the use of sexed semen, Don hopes to have extra heifers placing selection pressure on the herd.

"If we have got 20 fresh cows in tomorrow, for example, then there's 20 poor performers in our system that are going to get culled," Don said.

"That is really where the productivity gains come, identifying the non-performers and lifting the average production."

Complimenting the drylot is the 80m by 24m wide Gable Entegra shed used as a maternity barn.

Segregated into sections for transition cows, calving cows, sick cows and fresh cows - those one to 14 days-in-milk - it also includes a crush and midget milker.

Cows calve down onto sawdust and initial calf management is easier for staff.

"It means we can pay better attention to our fresh cows," Don said.

"We can get them to peak their production a lot quicker and hopefully eliminate health issues."

The entire facility is focused on cow comfort.

The Entegra shed has an 18-degree pitch roof with an open vent on the top to draw air through, up and out of the shed. Don said this could be converted to a compost barn.

True to the aspirations of his younger-self, one of his properties resembles the farms he'd admire on the pages of the magazine.

But more importantly, Don and Meg have set-up their business for the future.

It's in a position to manage the challenges of farming in Northern Victoria for any possible investor and somewhat future-proofed incase their children Emily 22, Teagan 19, Zoe 16 and Jed 12 want to continue the family legacy.

"But I've convinced it is under this sort of system."

The story Future-proofing the dairy farm in Northern Victoria first appeared on The Land.