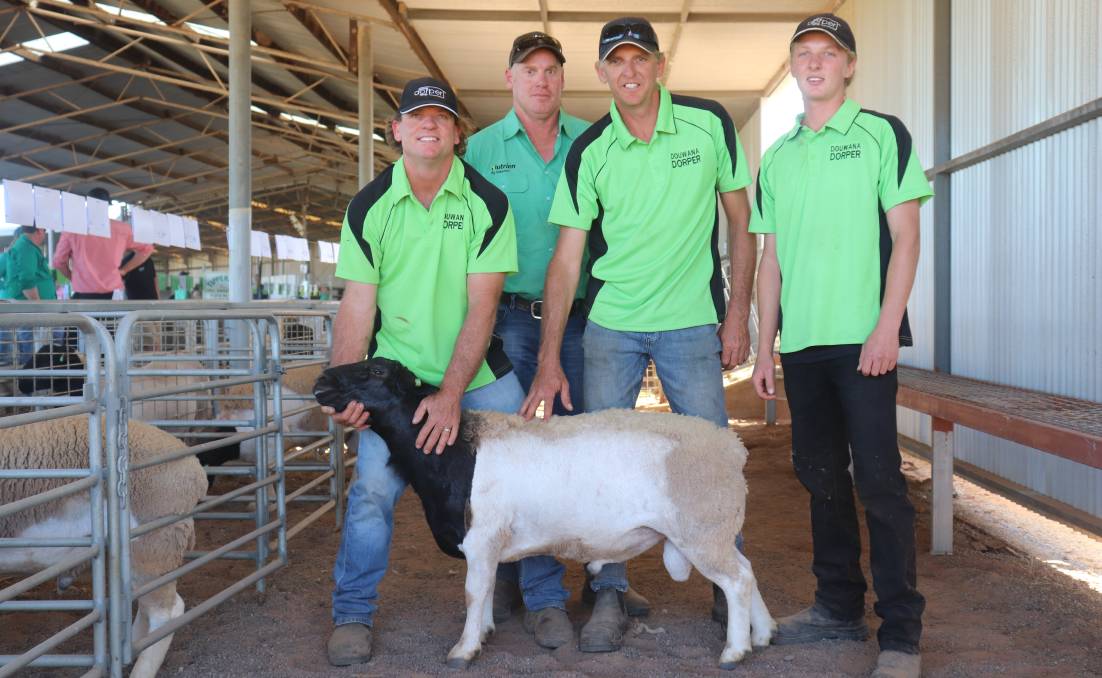 Despite another tough season for producers, the quality and presentation of the rams was too good to pass up, with 42 registered bidders clearing all but 13 of the 214 rams in the shed in what was a slightly larger offering compared to the previous year.

Buyers maintained their enthusiasm for the entirety of the sale which saw the overall sale average gain $180 for the 201 rams sold.

It was once again the Douwana Dorper stud, Batten Farms, Yuna, that achieved the top price for the sale, reaching $2900 twice. "The Poll Dorsets from Tipperary Farming Enterprises attracted return buyers who were able to buy confidently in their genetics.

"It was a very strong sale for the Douwana Dorpers as people chased great genetics and paid well for them."

Elders Geraldton auctioneer Gary Preston said it was a good sale with a magnificent, even line-up of rams and was a credit to the breeders.

"It was great clearance, especially with the number of sheep that have left the district," Mr Preston said.

Kicking off the sale was Les Sutherland's Wynarling stud, Perenjori, with a total of 38 Poll Merinos up for sale.

Nutrien Livetock auctioneer Craig Walker had no trouble conjuring bids, with all of the rams selling.

The stud's top price was $2200 which was reached by two rams.

The first was purchased by a regular supporter of the sale Rass Barndon, AV & ME Barndon, Moonyoonooka, for a ram with test wool figures of 20.7 micron, 16.9

Mr Barndon runs a mixed farming enterprise and said the Wynarling ram was a good size that suited his operation.

He purchased one other ram to finish the day for an average of $1700.

Mr Blayney said it was a large-bodied ram with a long staple and bright wool.

The Blayneys usually run around 1500-1800 Merino ewes, but this has varied due to the drier seasons, with their weather lambs being sold as shippers.

Mr Blayney totalled six rams for an average of $1833. Wynarling stud principal Les Sutherland said he was very pleased with the sale and really appreciated the support from all the buyers.

Next in the catalogue was the Levett family's Tipperary Farming Enterprises, Walkaway, with a total of 116 Poll Dorset rams for sale.

The stud once again offered its rams in two separate offerings with 80 Poll Dorsets in the first and a further 36 in the second under the Woodgrove name, having purchased the stud two years ago.

By the sale's end, 105 rams had sold under the hammer with 69 out of 80 Tipperary rams selling during the sale and a further one being sold privately and 100pc clearance for the Woodgrove rams.

Prices peaked at $2100 and was paid by Paul Broockmann, Boyup Brook who was a first-time buyer at the sale.

Mr Broockmann said that although the ram didn't have the best figures on the day, it had the best structure and a nice long body.

The ram will be added to his sheep enterprise which is 50pc wool and 50pc prime lamb, with his lambs mostly being sold to abattoirs.

In the Woodgrove portion of the offering, values topped at $800 five times from two different bidders.

The volume buyer of the Tipperary offering was Mt Ferguson Grazing Co, totalling 11 rams at an average of $1445.

Gabyon Pastoral Co, Dongara, also paid $800 for three different rams and went on to purchase another four rams for a total of seven and an average of $743.

Also securing seven was GI & TN Thompson at an average of $700.

Building a team of 20 Woodgrove rams was Frank and Jerry Clune, Newmarracarra, averaging $625.

The Clune family runs a mixed farming operation of around 2000 Merinos ewes mated to Poll Dorsets and 3500 purebred Merinos.

Their lambs drop in June and are usually sold in October as stores.

"They were all nice stretchy, early maturing rams that were good on their feet," Mr Clune said.

Last but not least was the Dorper offering of 60 rams from the Batten family's Douwana stud at Yuna, with the shed heating up as buyers who were eager to secure Douwana genetics, pushed prices to the sale's top of $2900, twice.

The Obsts went onto to secure another five rams for a total of six at an average of $2300.

Ms Obst said they like the shedding types because they were simple, easy to manage and fit well into their mixed enterprise operation.

Douwana also posted the second-highest price of the sale when three different rams made $2800.

Mr Wasley picked up a further 20 rams, averaging $1838, to be the volume buyer of the sale.

Bradelli Farm, Moorine Rock, also paid the second-highest price of the sale for two rams and ended the day with a total of six rams, at an average of $2600.

Dowunana Dorper stud co-principal Jason Batten said it was a great sale and he was extremely pleased with the clearance and support from both old and new clients.

"We put up a high-quality line up which people respected and paid accordingly," Mr Batten said.