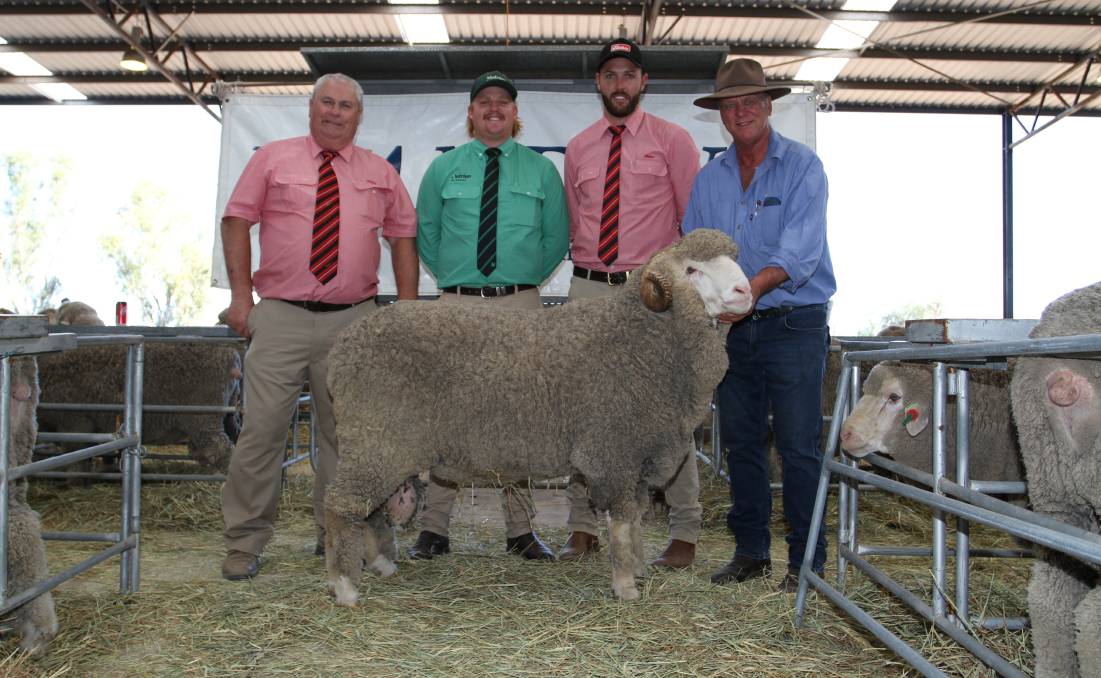 A QUALITY line-up of Poll Merino and Merino rams sold to $8100 at the annual Ejanding on-property ram sale at Dowerin recently.

Despite seasonal challenges and reduced ewe numbers throughout its client base, the Jones family and the Ejanding team maintained their recent sale numbers of 180 Poll Merino and Merino rams.

The extensive catalogue of well grown and accurately measured rams ranking highly across various traits on MerinoSelect drew several comments prior to the sale, directed toward the Ejanding's consistently-improving depth and performance every year.

Testament to the Ejanding wools and type, new buyers joined the stud's loyal following descending from the Central and Northern Wheatbelt, coastal regions and the Great Southern.

The sale jumped out of the blocks in blistering fashion with buyers prepared to compete strongly on their selections which saw plenty of commercial buyers filling their requirements at extremely strong values. 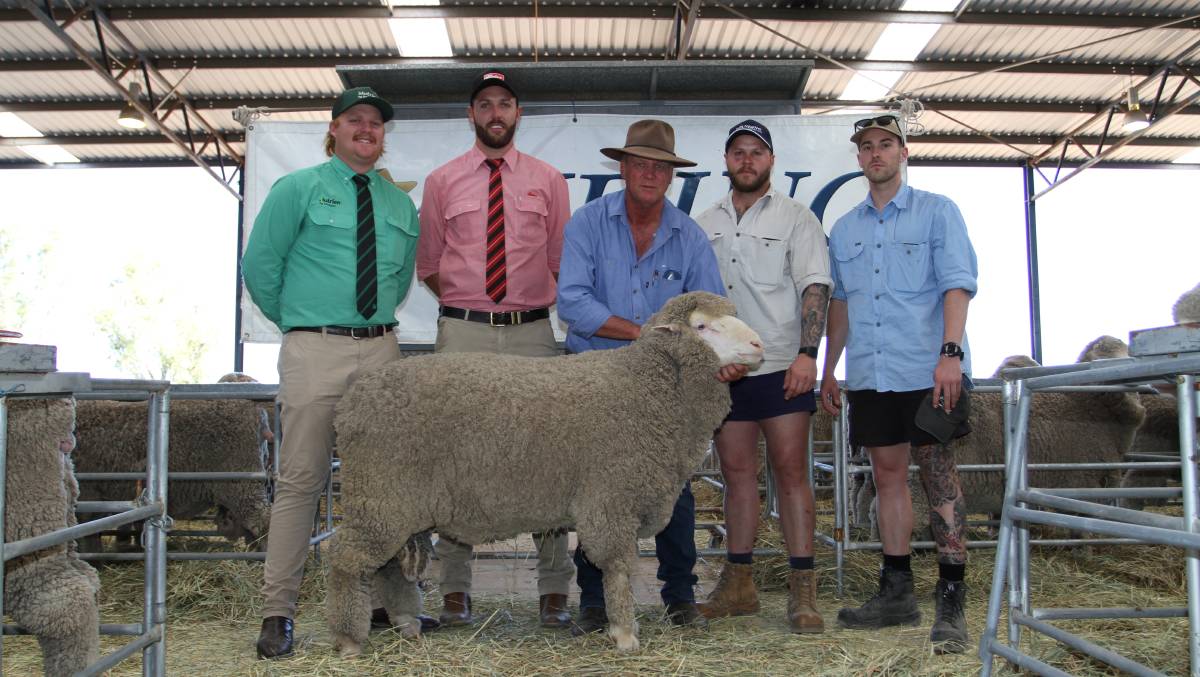 This buying support was among the sale highlights and showed an ongoing commitment to their breeding programs and the sheep industry, despite facing some challenges.

But when the sale turned the corner at the halfway mark, many buyers had filled their requirements and remaining buyers were afforded to become more selective.

A few buyers went to work on building significant teams at good values from $700 to $800, but some rams were overlooked as the sale wore on.

This resulted in the sale following the softening trend seen at most ram sales this season with clearance and values back on last year's sale.

When the 180th and final ram was sold, the Elders and Nutrien Livestock selling teams, guided by auctioneers Steele Hathway, Elders Corrigin and Grant Lupton, Nutrien Livestock Wongan Hills, had sold 140 rams (87 per cent) at auction at an average of $1650. 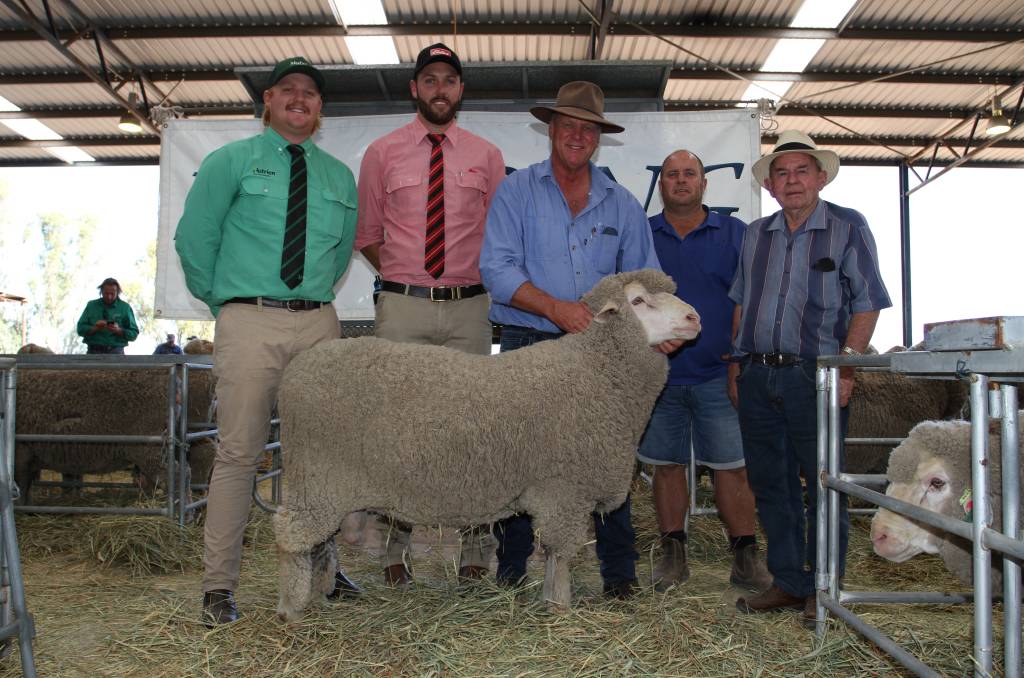 This marked only a $98 drop in average compared to last year, however clearances took the biggest hit from last year's result of 165 of 180 rams (92pc) sold under the hammer.

Mr Broad, who classes the Gaze family's commercial sheep flock, said it was the first time the family had purchased a sire outside of the Great Southern region for its nucleus breeding program.

"We were chasing some new genetics and had seen the ram being promoted in the Farm Weekly," Mr Broad said.

"We liked its outlook and for a big ram it carries outstanding wool quality on a 132kg frame.

"Going forward in the industry, it is a good dual-purpose animal with carcase and wool and I'm very confident its wool will handle the Borden environment."

The $5400 top-price Poll ram was paid on two occasions.

Mason Millsteed said they were breeding towards a six-month shearing cycle on big plain bodies and selected sires accordingly.

"We selected about five rams from the sale but we were happy to get this one.

"The Ejanding bloodlines have performed well for us and grow out really well."

The Bryant family, Bou-Saada, Latham, had circled lot 14 for a reason with the half-brother to lot one also attracting plenty of interest and selling for the $5400 equal top Poll price.

The Bryant family runs 1100 commercial ewes and breed its own flock rams from a selected nucleus of 120 ewes and has been buying sires from Ejanding for the past six years.

Colin Bryant said the Ejanding sheep performed well in the Northern Wheatbelt and they look for a dual purpose sheep with frame and staple length.

While initially being passed in at auction, Eastough Farming, Northampton, soon agreed to the $5000 reserve price for the upstanding Poll ram in lot two.

After only requiring a handful of rams last year, the Sparkman family, Shanandale Pty Ltd, Perenjori, returned to stock up with a team of 14 rams including six Polls costing from $800 to $2600 and eight Merino rams from $1000 to $3000.

Ashley Sparkman said they have maintained their ewe numbers and would join around 2100 in coming mating season.

He said following a period of five years improving their wools, they have spent the past few years chasing early maturing, more dual purpose type sheep in their ram selections.

W Emmott & Sons, Dowerin, went to script again this year with another big team of 15 Poll rams at good value for money at mostly $700 to $800.

Mr Luers also filled a decent order of Poll rams for NB & KL Freason, Wongan Hills, bidding from $1200 to $2600 for eight rams, while Elders Wongan Hills agent Jeff Brennan collected 12 Poll rams, also at value from $700 to $1200 on behalf of Mardenway Pty Ltd, Kalannie and Wheeldon Vale, Dowerin, finishing the sale with nine Poll rams (one ram after the sale) paying from $800 to $2000.

Buyers exclusively chasing bigger numbers of Merino rams included RE & WK Jones, Dowerin, with seven rams from $700 to $2400 and B & E King, Latham, also with seven rams (one following the sale) rams costing $700 to $1400.

There were several commercial buyers who paid in excess of $3000 for their selections.