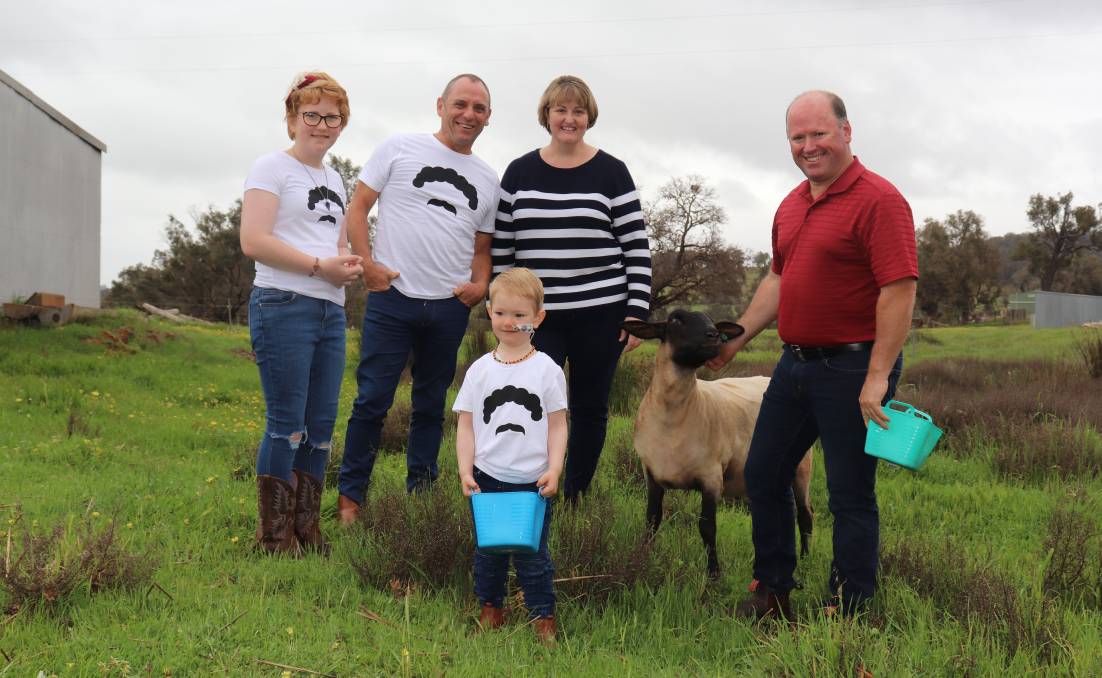 In Sept 2019, Jamie was diagnosed with Acute Lymphoblastic Leukaemia.

UNTIL you notice the nasogastric intubation tube taped to his cheek, Jamie Sherlock seems like any other three-year-old boy, preoccupied with his toy trucks and earthmovers or running around outside.

Jamie has good days where he can get outside and play in the sandpit with his toys, collect eggs that the chooks have laid and run with Coco the pet lamb that is now bigger than him, on his family's 16 hectare property at Marradong near Boddington.

He also has bad days where he feels sick, stays inside, isolated from people and all the things little boys love to do outside.

In September last year Jamie was diagnosed with Acute Lymphoblastic Leukaemia (ALL), a type of blood and bone marrow cancer.

His immune system is compromised by almost 12 months of intensive chemotherapy treatment in Perth and his mum Nicky has to administer oral chemotherapy drugs and steroids at home daily.

But seven days short of a year staying at either the Perth Children's Hospital (PCH) or the Leukaemia Foundation's nearby accommodation units, Jamie and Nicky returned home last month to be with Nicky's daughter Jessica Mahy, 13, and Jamie's father Les, as a family again.

Life is returning to a relative normal. Jamie and Nicky will have to make monthly trips to Perth so the medical team at PCH can check blood and bone marrow samples and every three months he will go back for another operation.

They face another two years of this regime and it will be five years without further complication before Jamie is declared to be in remission.

Nicky knows the chances of relapse are "quite high".

But the wool industry, through the Michael Manion Wool Industry Foundation (MMWIF) and the local community through a gofundme page, has chipped in to help the family make those necessary trips to Perth.

Les is a team leader with Newmont at the Boddington gold mine and the company and his work colleagues have been very good about him taking time off to be with his son in Perth - there was a two-month period early in the COVID-19 pandemic where Les could not see Jamie.

But Nicky had to give up her job in the office at Karnet Prison Farm, Serpentine, immediately Jamie's diagnosis was confirmed and the family has survived on one wage since then.

Les and Nicky both come from farming backgrounds - Les grew up on a Margaret River dairy farm and Nicky's family were sheep graziers in New South Wales - so they wanted to give the children a taste of the freedom and adventure they enjoyed growing up.

But Jamie's diagnosis changed all of their lives. "Hearing your child has cancer is one of the hardest things any parent will ever hear, it changes your entire life right there," Nicky said last Friday when Farm Weekly and MMWIF Western Australian director and Endeavour Wool Exports buyer Steve Noa visited.

"From there, it was straight into hospital - he and I didn't go home again - and straight into treatment because it's such an aggressive cancer," she said.

"They really hit it hard straight up, opening him up and injecting chemotherapy drugs into his spine, lumbar punctures and bone marrow trephines and aspirates (collecting samples of bone marrow and marrow fluid for testing), MRI (magnetic resonance imaging), EEG (electroencephalogram to monitor electrical activity in his brain) and ECG (electrocardiogram to check his heart rhythm).

"Suddenly you're bombarded 24 hours a day with medical personnel and terminology - you seriously go from zero to 100 very, very quickly."

"For a little kid it's just harsh, he was in a room, he couldn't go outside, it was like he was in a box.

"Previous to that he was just a kid running around outside, he hadn't been touched by technology, he wouldn't even watch television, he just wanted to be outside.

"Within two weeks (of Jamie being admitted to PCH) I bought him an iPad.

"That was the hardest thing, to see him go from an active outdoors kid so full of life to two weeks in (to the treatment) and he was so weak he couldn't even pull himself along the bed."

Nicki said he had an operation every week for the first two months.

"Every time he has to have a procedure it has to be done under anaesthetic, so he's had a huge amount of anaesthetic," she said.

"A common side effect of one of the medications they gave him is blood clots in the brain and that happened to Jamie, it stopped all the blood flow to one side of his brain.

"Now every time he has a procedure they have to monitor that, it's an extra complication and the long-term side effects of it we don't know.

"He has speech delay - he's picking up but he's still miles away from the milestones for his age.

"It affects his heart and all his organs.

"The heart is the main one that they'll probably have to monitor pretty much for the rest of his life."

While Jamie and Nicky were in Perth, Jessica moved in with grandparents Debbie and Colin Mahy on the farm across the road so her life could remain as settled as possible for her first year in secondary college.

In March Jessica shaved off her long red hair, raising $5600 for the Leukaemia Foundation in the World's Greatest Shave.

She also received an award as one of the most inspiring stories among the people Australia-wide who shaved their heads.

Richard Nell from the not-for-profit Kids Cancer Support Group put Mr Noa and the MMWIF in touch with the Sherlock family after he had approached the group seeking to help a rural family.

"With the wool price being high the last couple of years people in the wool industry have been very generous and donated to the foundation," Mr Noa said.

"When I became a director (of the MMWIF) last year I decided I'd try and find a regional family in WA that we could help, so I contacted Richard.

"It's obviously been a financial drain (for the Sherlocks) and as they've had a really tough year we've organised a weekend for them at Crown in Perth.

"The foundation has also given the family $8000 to help towards ongoing therapies and other costs of coming to Perth regularly," he said.

It is more common in boys than girls.

ALL affects the blood and bone marrow where blood cells are produced.

It is characterised by an overproduction of immature white blood cells.

Because the bone marrow cannot produce adequate numbers of red cells, normal white cells and platelets, people with ALL become more susceptible to anaemia, recurrent infections and to bruising and bleeding easily.

The extra white blood cells can spill out of the bone marrow into the bloodstream and accumulate in various organs including the lymph nodes, spleen, liver, brain and spinal cord.

A REGISTERED charity, the Michael Manion Wool Industry Foundation was established in 2015 as a reach-out support service for rural families or children in need.

Michael 'The Legg' Manion was a larger than life, gregarious wool buyer who had a great empathy for people and always went out of his way to mentor and help young people entering the industry.

His wool industry colleagues and friends created the foundation in his honour as a lasting legacy for the industry and agriculture in general.

It runs several fund-raising events each year and farmers often donate a bale of wool which is sold, with the proceeds going to the foundation.

Since it was established the foundation has helped more than 20 families.