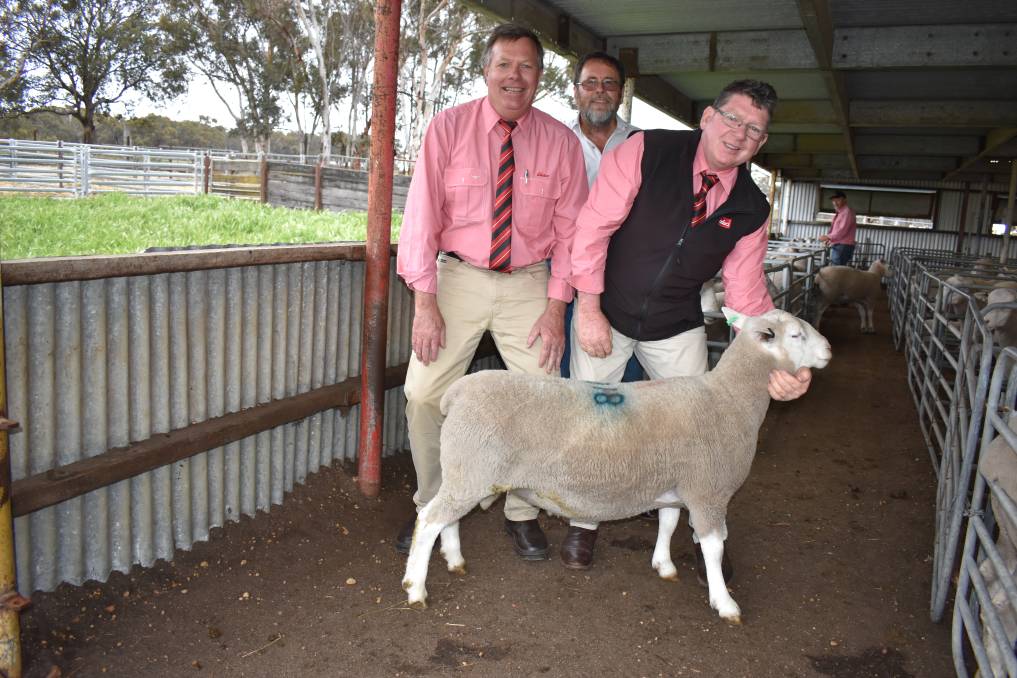 The sale holds the WA record for number of lots sold online in a single interfaced stud sale.

COMPETITION was the name of the game at the annual Mount Ronan Maternal Composite and White Suffolk stud on-property ram sale in York, with bidders pushing averages well over $2000.

With 34 registered buyers packing the shed and 29 more on the AuctionsPlus line, the bids were flying thick and fast from the outset.

The sale holds the Western Australian record for number of lots sold online in a single interfaced stud sale, with 59 lots selling to online buyers.

At the final fall of the gavel, only 39 of the 63 buyers were able to get their hands on some of the much sought after genetics due to the high demand, resulting in a full clearance of the 180 rams in the shed, comprised of 80 White Suffolks and 100 Maternal Composites.

Mount Ronan has built up a strong rapport with its local and Eastern States buyers, with attention to detail and commitment to accurate trait measurement with consistent comprehensive recording of Lambplan Australian Standard Breeding Values (ASBVs). Andrew Mackie (left), Claire Dwyer, and Iain Mackie, Mackie Farms, Mt Barker, were the volume purchasers on the day with their successful bids on a total of 20 Maternal Composite rams.

All the sires penned had their measurements logged in the catalogue and buyers were able to access this prior to the sale, giving them the time to make their selections and be prepared.

Knowing there was particular interest in the Maternal Composite genetics on offer, stud principal Guy Bowen changed the order of sale and sold lots 81 to 180 first, with the White Suffolks following immediately after.

As testament to the demand for the entire offering at Mount Ronan, the bids for the first White Suffolk ram put up for sale started at $6100 due to the AuctionsPlus buyers having already commenced their bidding, while the sheep were being run through to the ring.

He said they had all areas covered bar Tasmania, Queensland and the Northern Territory.

"I could not even begin to gauge the number of bids that came through the system, it was phenomenal," Mr Spicer said.

"On the Maternal Composite sires, most lots already had the reserve price bid in.

"Lot one, the first White Suffolk ram, was already sitting at $6100 before it was even in the ring.

"It is a real credit to Guy Bowen, as he keeps in close contact with clients and has strong pre and post-sale support."

"They are really amazing," he said.

Figures increased across the board and Elders auctioneer Graeme Curry said the sale was really a "hang on for the ride" kind of event.

"It was a great result," Mr Curry said.

"When you back your passion for breeding with a great marketing plan and you have the follow up support of clients, you get this result.

"There was huge interest from the Eastern States, from regular buyers and there were new buyers in the mix.

"The rams were in peak condition and sold to deserving highs, this is what happens when you have grass and the passion for meat combined."

Mount Ronan principal Guy Bowen said all the rams had been pasture finished, since the break of the season and were truly - what you see is what you get, backed by their strong figures.

The top priced ram of the sale was a Maternal Composite ram, which entered the ring at number 30 for the day, and achieved a huge $9200.

The ram was marked as a star lot by Mr Bowen and he said the sire had a wonderful balance of high production ASBVs, including huge muscling, superb conformation and early maturity pattern, as well as a remarkable dam efficiency index and would be ideal for mating ewe lambs.

The ram was the sole purchase for long term buyers Al Lubcke, Manypeaks, via AuctionsPlus.

Mr Lubcke, along with wife Kathy and daughter Samantha, have been buying from Mount Ronan for about nine years and always buy one of the top Maternal Composite sires each year, for use in their commercial operation.

He said they had seen the figures of the ram prior to the sale and trusted Mr Bowen's judgement of how good the ram was.

"We run a commercial flock and keep our own ewe lambs, so need a ram with a capped end weight," Mr Lubcke said.

"We mate the ewe lambs at seven months.

"There are not many stud breeders out there that aim for commercial production, and Guy's breeding is exactly that and what we are aiming for.

"The breeding has been ideal for us and has improved year in year out, they are rams that can work really well for the commercial production of lambs."

The volume buyer in the Maternal Composite section of the catalogue was Iain Mackie, Mackie Farms, Mount Barker, who attended the sale with son Andrew Mackie and Claire Dwyer, with son Phill also being a big part of their operation.

The Mackies were first-time buyers at the sale and ended up putting together a team of 20 maternal composite rams, to a top of $2900, three times, and for an average of $ 2475.

Mr Mackie said it was very hard to get a dual purpose sheep like the Mount Ronan Maternal Composites and that the Bowens were great with their genetics because they really were passionate about getting it right.

"He is also very open to feedback, which as buyers is very important, because it should always be a two way street," Mr Mackie said.

"We have looked at the sheep in the past and followed his genetics.

"These genetics are robust for our environment and we are providing a good product for our buyers.

"We utilise the rams over composite ewes."

Another volume buyer in the Maternal Composite offering was regular volume client Andrew Hunter, AR & VJ Hunter, Yerong Creek, NSW, with his purchase of eight rams to a top of $3500 and an average of $2850.

DM & JM Hallet, Boyup Brook, purchased eight Maternal Composites and one White Suffolk, to a top of $3000, twice and for an average of $2400.

The top price White Suffolk may have started the bidding at a huge $6100, but it finished at $7100, with the highly sought-after ram being knocked down to Mike Cameron, Cherylton Farms, Donnybrook, via AuctionsPlus.

These are outstanding high production ASBVs and eating quality genetics.

The volume buyer in the White Suffolk catalogue was Owen Blake, Tandari Pastoral, Harefield, NSW, who purchased nine sires to a top of $2100 for an average of $1900.

It was undoubtedly an extremely successful sale, with the proof in the figures and the client's willingness to chase the genetics they have had their own success with.