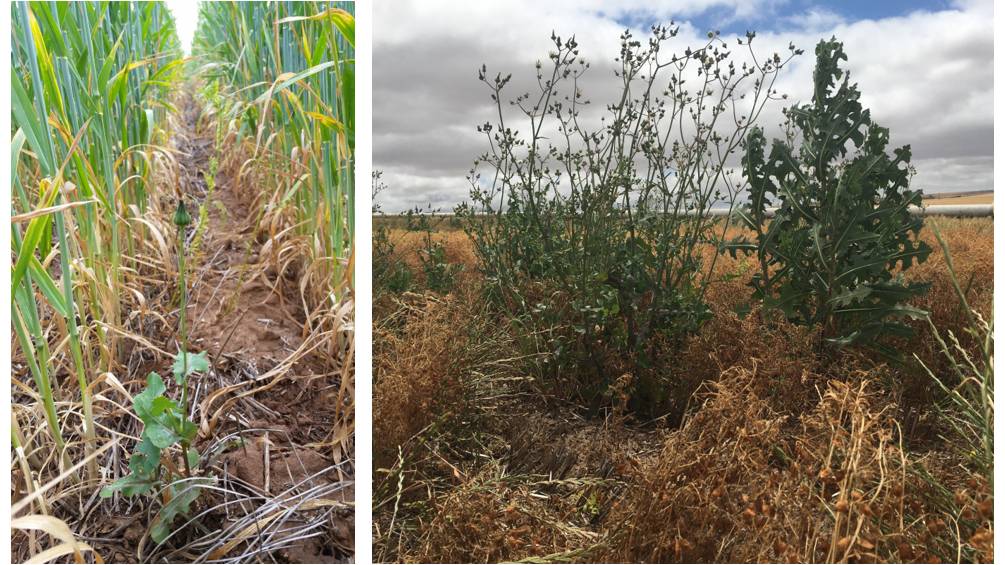 Resistance to Imidazolinone (IMI) herbicides and other Group B chemistry, particularly the sulfonylureas (SU), is making control of some broadleaf weeds in lentils very difficult.

RESISTANCE to Imidazolinone (IMI) herbicides and other Group B chemistry, particularly the sulfonylureas (SU), is making control of some broadleaf weeds in lentils very difficult.

A new IMI-tolerant lentil variety from Seednet, PBA Kelpie XT, has just been released, it is the fifth lentil variety released with tolerance to Group B herbicides, imazamox and imazapyr.

University of Adelaide, South Australia, weeds researcher Alicia Merriam said IMI-tolerant lentils have been very popular with growers and have increased the weed control options in the crop.

"However resistance in sowthistle and prickly lettuce is very widespread in the southern region," Ms Merriam said.

"Screening has shown resistance to IMI herbicides in more than 75 per cent of populations of both weeds."

With investment from the Grains Research and Development Corporation (GRDC) and an Australian government Research Training Program Scholarship, Ms Merriam conducted a trial at two sites in South Australia.

The aim was to investigate options to implement the best practice recommendation for lentils - to control weeds in the preceding wheat crop and again at sowing or crop emergence in the lentils.

Both sowthistle and prickly lettuce are renowned for their prolific seed production when growing in non-competitive situations and wind dispersal of seed enables recruitment of resistance from crop borders, and far beyond.

Because of that, eradication is not a realistic proposition.

"Sequencing the gene that controls resistance to Group B herbicides has uncovered a large variety of different mutations in these species across the Mid North and Yorke Peninsula, in South Australia," Ms Merriam said.

"Most mutations of this type cause SU resistance, but some cause IMI resistance and the effect can vary between weed species.

"Crucially, we found all these mutations within a single grower paddock, which shows that they are widely distributed."

According to Ms Merriam, crop rotation and increased crop competition are essential to help run down the seed bank and suppress seed production by all means available.

"Herbicide tolerance in pulse crops is a useful tool when coupled with strong competition and other herbicide options in as many crops as possible in the rotation," she said.

Widespread resistance to Group B SU and IMI chemistry exists in both sowthistle and prickly lettuce broadleaf weeds in the Southern region.

In surveys conducted in the Mid North and Yorke Peninsula regions the percentage of SU-resistant populations of prickly lettuce increased from 66pc in 1999 to 82pc in 2004 and 100pc in 2019.

"The populations screened in the 2019 survey were all resistant to Group B IMI chemistry," Ms Merriam said.

"Surveys also show that Group B resistance in sowthistle is very common across the rest of the Southern cropping region."

In the trials, the herbicide treatments used in the 2018 wheat crop had an impact on the sowthistle population in the next crop, but had little effect on prickly lettuce, while crop competition treatments did not reduce weed density in the following growing season.

The weed populations at both sites were confirmed resistant to Group B herbicides but susceptible to glyphosate.

Two levels of crop competition - seeding rates of 60 and 90 kilograms per hectare - were also applied.

Ms Merriam said in the 2018 wheat crop, the proactive treatment gave the best control of sowthistle which resulted in a reduction in numbers in the 2019 crop.

"The herbicide treatments both reduced prickly lettuce density better than the untreated option but there was no additional benefit from the more expensive proactive treatment in either the year of application or the following crop.

"Crop competition is a well-established practice for reducing weed seed production, so it was surprising to find that increased crop competition did not reduce weed numbers in the following year."

Herbicide tolerant crops are an important tool but must complement a diverse arsenal of weed control tactics.

Short rotations are a very risky option and will lead to yield-reducing numbers of these prolific seeding weeds.

Ms Merriam said sowthistle and prickly lettuce could be expected to become increasingly difficult to control in the lentil phase.

"Neither crop competition nor proactive herbicide regimes alone are likely to provide sufficient downward pressure on these weeds in a short rotation, with building in a longer break away from lentils is likely to be a more effective strategy," she said.

"The number of different resistance mutations found in the cropping regions of the Mid North and Yorke Peninsula show that Group B resistance is widespread, and here to stay.

"This highlights the importance of diversity in crop and herbicide groups rotations, including the strategic use of herbicide tolerant crops."