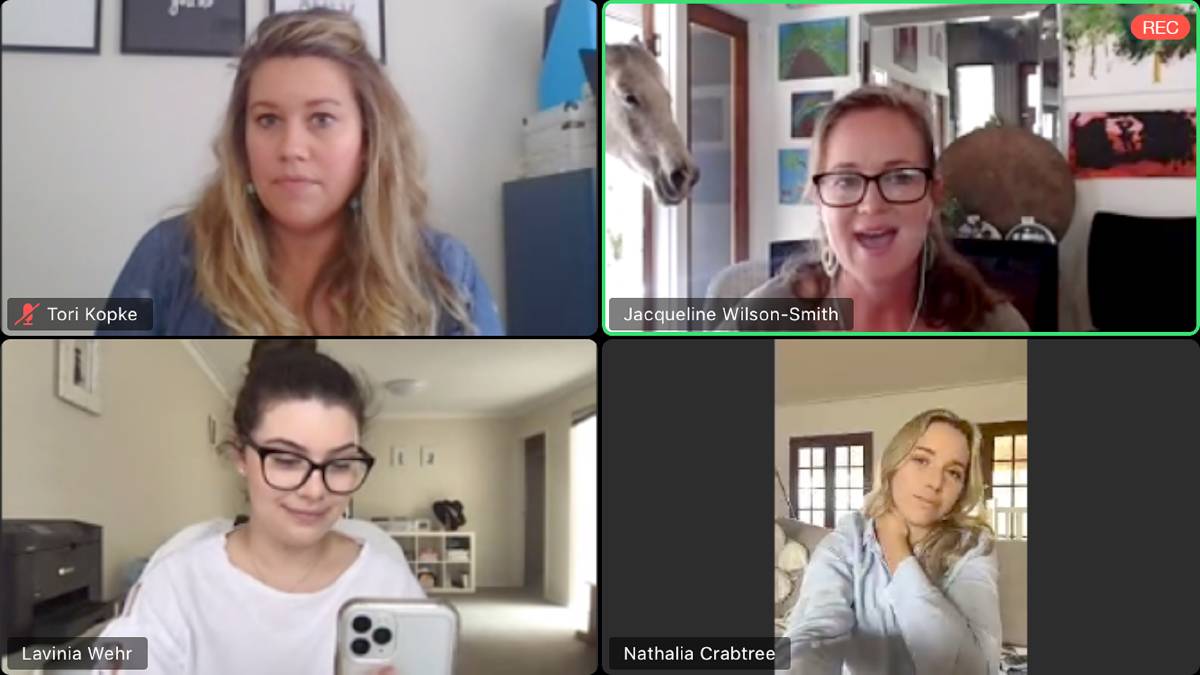 "As an innovator, diversity is a great source of ideas; it's about breakthrough thinking."

DIVERSITY was the topic of discussion among a panel of three rural women featured at the 2020 Virtual Summit as part of the International Day of Rural Women recently.

Facilitated by Generation Ag co-founder Lavinia Wehr, the women spoke about what diversity meant to them and why they believe it's important.

Ms Peek was the winner of the 2019 AgriFutures WA Rural Woman of the Year award based on Saltwater Country Inc - a not-for-profit, indigenous-led organisation that is based on the Aboriginal cowboy legacy and aimed at improving the lives of Aboriginal people.

Now she focuses her work on community relations and is also the co-founder of the Cultural Intelligence Project.

From Sweden, Ms Crabtree moved to Western Australia 10 years ago to study journalism at university and later relocated to Bremer Bay after meeting her now husband.

She runs her own business using photography and social media marketing in a way that she has been able to incorporate her university-acquired skills into a home-based business, while also raising two young daughters.

Having previously worked in the corporate world, Ms Wilson-Smith described herself as an "innovator" and "strategic collaborator" in the agriculture and food industry.

She established her organisation, Sustainable Innovation Company, last year which enables her to work collaboratively nationally and internationally from the comfort and convenience of her own rural home.

"As an innovator, diversity is a great source of ideas - it's about breakthrough thinking," Ms Wilson-Smith said.

"With diversity we need to acknowledge that conflict comes with it, so it's important to figure out how to manage it to get the best of diversity.

"When you encourage differences, you need to focus on working collaboratively not competitively."

Ms Wilson-Smith said a good collaborator needed to be assertive and empathic to different views.

"There's an opportunity for women to step up as strong collaborators as they have practice in thinking about the broader picture," she said.

As an Aboriginal woman with Chinese heritage, Ms Peek "lives and breathes diversity" and offered a unique perspective and highlighted the difference between tokenism and diversity.

"Diversity is having population parity, which is when the people in your community are represented," Ms Peek said.

"I'm very experienced at being the only woman in a room and the only person of colour.

"But I make a conscious effort not to be tokenistic, which means that having one person of colour or one woman etc. is not being diverse."

Despite being under-represented, Ms Peek said she was not easily intimidated, which she attributed to her diverse lived experience.

"That has helped me understand the game and navigate the course and I've found that working in the community ensures you have cultural integrity."

Ms Peek said businesses failed to understand that diversity should be a requirement, not an option, but they were reluctant to accept it out of fear of losing power.

"You're not losing anything, you are gaining something with diversity," she said.

With vast experience in the corporate sector, Ms Wilson-Smith said she has seen a shift in companies welcoming and encouraging diversity.

"The corporate sector is waking up to the fact that diversity is good for business and it's not just about being fair - diversity in the workplace brings diverse thoughts and personalities," she said.

"Diversity can improve businesses' ability to make more money by 25 per cent."

Being a self-employed one woman show, Ms Crabtree felt she had little challenges in regard to diversity in her work.

However, she spoke of the stigma associated with being a content creator that promotes herself with social media, which is also referred to as an 'influencer'.

"I wonder if content creation was a male dominated profession, would it be viewed differently and would content creators be paid more?" Ms Crabtree said.

"A lot of companies expect me to work for free with a product as payment (industry speak for 'gifting'), when it takes a long time to create, edit etc."

In the decade that she has been in WA, Ms Crabtree said she has noticed a greater female presence in agriculture.

"There are more women taking on the farm and I want my daughters to feel that being a woman is not different, it's just the same," she said.

"I hope they have more female role models in agriculture, whether or not they want to work in the industry."

In terms of what Ms Peek hopes to see with diversity, the cultural divide with indigenous people is greatly hindered by the remote locations of communities.

"I hope that technology and infrastructure grow so that we can stay on our traditional country but still contribute to society and have our voices heard," she said.