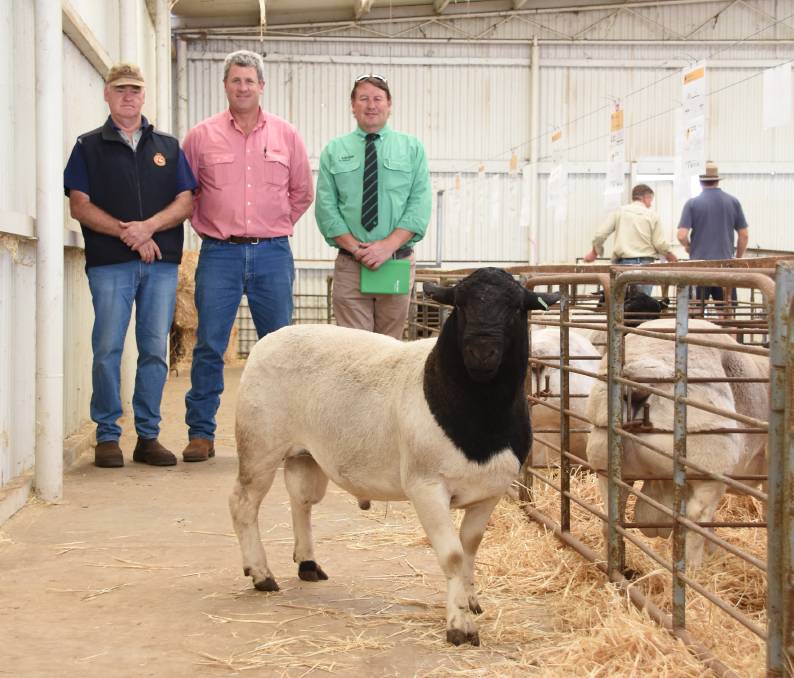 STRONG buying support from the Eastern States, both on the phone and on AuctionsPlus, coupled with solid local enquiry were the key ingredients to the success of last week's Kaya Dorper and White Dorper Production Sale at Narrogin where prices hit a high of $5400 for a Dorper sire and $2025 for a Dorper ewe.

With stronger enquiry from the Eastern States compared to last year due to the better season, the Veitch family achieved a 100 per cent clearance across both the ram and ewe offerings, while the averages for both sections also increased on last year with the rams up $1011 and the ewes up $228.

The AuctionsPlus platform played a major role when it came to the Eastern States purchases in the sale conducted by Elders in conjunction with Nutrien Livestock, with the catalogue receiving 1550 views and 68 registered bidders logging into the sale from New South Wales, Victoria, Queensland, South Australia and WA.

All up there were 964 online bids placed across 131 lots on AuctionsPlus which resulted in 66 lots being purchased online that are now headed in the main to NSW, Queensland and Victoria while some will remain local.

Elders auctioneer Nathan King said it was a very strong result for the Veitch family.

"There was solid support from across Australia on both the Dorper and White Dorper offerings on the back of better seasonal conditions in the Eastern States," Mr King said.

"The quality of both breeds through the rams and the ewes was fantastic and a credit to the Veitchs and their breeding program.

"The ewes sold well above expectations and the demand for them was certainly solid and consistent on the back of better interstate enquiry where the season is certainly better in the areas where they perform best." 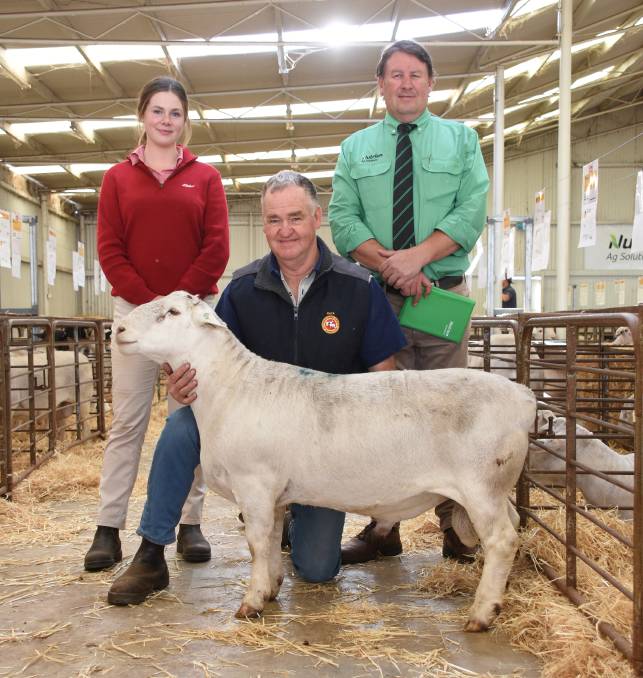 The Dorper ram offering opened the sale and there was very strong demand for these from buyers resulting in all 41 offered selling under the hammer for an average of $2288 and to the sale's top price of $5400, which were both significantly up on last year's result.

In comparison in last year's fixture the Veitch family offered and sold 49 Dorper rams to a top of $2800 and an average of $1139.

Achieving the sale's $5400 top price was the seventh Dorper ram offered when it was knocked down to Nutrien Livestock Breeding representative Roy Addis who was taking buying instructions over the phone from return stud buyer Marius Loots, Prieska stud, Peak Hill, NSW.

The June 2019-drop, twin-born and raised, 99 kilogram ram was not only easy on the eye, displaying plenty of meat and squareness, but it also had the Australian Sheep Breeding Values (ASBVs) to match.

Mr Loots said the ram was well put together and a very correct sire.

"Along with his very good structure he also has good growth, fat and eye muscle figures," Mr Loots.

"His bloodline was also something that stood out to me and is different and something I can use in our stud as we have used a lot of Kaya blood over the years."

While Mr Keppel missed out on the top-priced ram for the Sheridans, he did secure six Dorper rams for them to a top of $2900 and an average $2367.

The family has been running Dorpers since 2000 and Mr Sheridan said they liked the Kaya rams because they were well put together with good figures and they move well.

"We are currently running 6500 ewes and are in the process of cleaning the flock up a little, so we will be retaining more of our younger ewes than normal," Mr Sheridan said.

The operation in the main sells the majority of its lambs to Coles and Hardwicks in Victoria while it has also sold some of its young ewes to the live export market as breeders in the past.

The second highest price in the Dorper ram run was $3100 which was bid twice.

Along with this ram the operation also purchased another two rams to finish with a team of three at an average of $2500.

There were five successful bidders on AuctionsPlus from NSW, Queensland and Narembeen, which operated on the Dorper rams and between them they secured 15 rams to a high of $2500 twice.

Next up in the sale was the offering of 48 White Dorper rams and with similar buying support they also all headed to new homes to a top of $4300 and an average of $1956, which was up $910 on last year's result.

Like in the Dorper rams it was again a tussle between Mr Addis and Mr Keppel on the phones when it came to the top-priced White Dorper ram.

Eventually it was Mr Addis who again prevailed and this time revealed he was bidding for Brad and Tanya Edson, Red Rock White Dorper stud, Keith, South Australia.

The ram which sparked the interest was the third White Dorper ram offered which showed off plenty of muscle and a great make and shape in the pen.

Like in the Dorper rams Mr Keppel was losing bidder on the rams for the Sheridans.

The second highest price in the run was $3600 which was paid for three White Dorper rams.

Oxford Pastoral also purchased another two White Dorper rams during the sale to finish the sale with a team of three at a $2933 average.

The other two rams to make $3600 were sold to buyer operating on AuctionsPlus from Duramana, NSW, which also picked up a third White Dorper ram at $2100.

There were another 14 White Dorper rams to sell to a further five AuctionsPlus bidders operating from NSW, Victoria and Narembeen.

Other significant buyers in the run were Elders stud stock prime lamb specialist Michael O'Neill who purchased four rams to a top of $2000 and an average of $1775 for Molloy Farm Pty Ltd, Mena Park, Victoria, while Tantemaggie, Pemberton, averaged $1733 over a team of three which topped at $2100.

The offering of 42 Dorper stud ewes was sold next and by the end of the run they were all headed to new homes after selling under the hammer for an average of $692, which was up $215 on last year's result.

The top price in the Dorper ewe run was an impressive $2025 when a ewe midway through the offering caught the eye of a couple of buyers, causing a bidding war to erupt.

In the end it was a buyer on AuctionsPlus based at Boyup Brook, who hung on the longest and secured the deep, wide, feminine ewe at $2025.

A further 16 Dorper ewes were sold to an AuctionsPlus buyer located at Mitchell, Queensland, which paid from $325 to $700 for their purchases.

Losing bidder on the top-priced ewe was the run's volume buyer Jure Denona, Dalma Dorper stud, Muckenburra, who finished the run with 22 Dorper ewes at an average of $757.

Mr Denona, who started his stud three years ago and has based it around Kaya bloodlines, said he liked the Kaya sheep for their good long bodies and good muscling.

With his purchases in the sale his stud ewe flock numbers now stand at 170 head.

The White Dorper ewes rounded out the sale and in this section the Veitch family offered and sold 23 stud ewes to a top of $925 and an average of $562, which was up $221 on last year.

Taking top price honours in the run at $925 was a July 2019-drop twin born and raised ewe when it was knocked down to an AuctionsPlus buyer from Inverell, NSW.

The Inverell buyer also secured another four White Dorper ewes during the run to finish with a team of five at an average of $645.

The biggest buyer in the run was a Dubbo-based, NSW, buyer operating on AuctionsPlus, who secured 11 ewes to a top of $900 and an average of $595.

Two other buyers operating on AuctionsPlus from Longreach, Queensland and Dalby, Queensland, both purchased two White Dorper ewes each.

There were three White Dorper ewes to sell to local buyers and the highest price paid for these was $400 bid by Nick Cheetham, Cheetara stud, Narembeen.