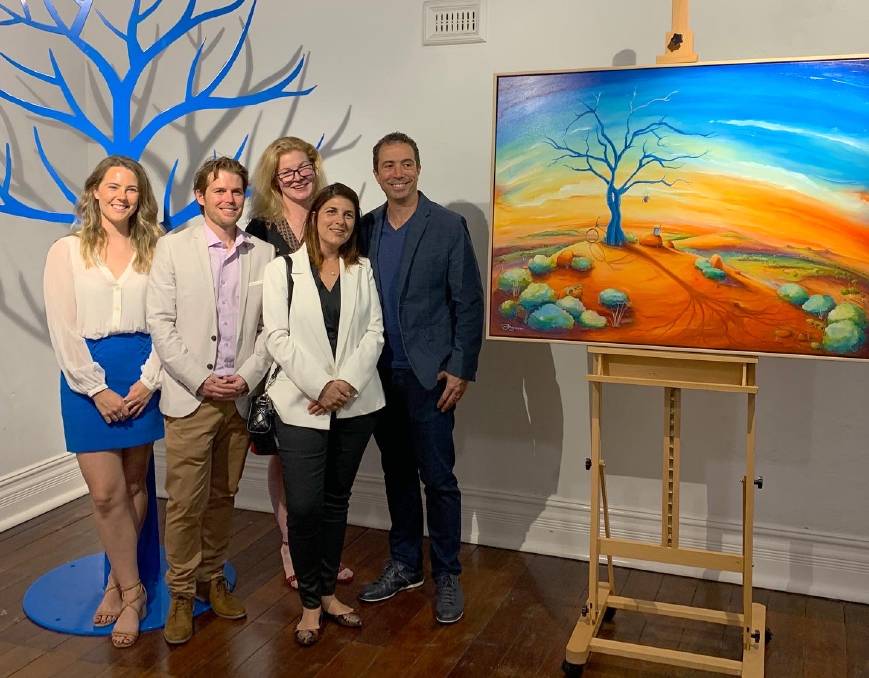 "It was a very special moment to see the artwork go to a special home."

AN art exhibition to raise funds for the Blue Tree Project fetched more than $10,000 last month.

Following the death of her brother Jayden, who suicided in 2018 at the age of 29, Kendall Whyte founded the Blue Tree Project, a charity based on the concept of painting dead trees blue to raise mental health awareness issues.

The idea for the charity came from Jayden painting a tree blue on his family's Mukinbudin farm as a practical joke in 2014.

"I was thinking of ways in which Kendall could have a longer-term funding model for the charity and I had been talking to Peter, so it was just one of those 'ah hah' moments that he should do some paintings for The Blue Tree Project," Ms Brunner said.

Bailiwick Legal covered the costs of Mr Ryan's art supplies for the project, as well as the costs of the exhibition evening at the Wilkinson Gallery in Claremont, attended by 150 people.

Given the large amount of interest in the exhibition's hero piece, it was decided at the last minute that the painting would be auctioned off at the event, selling for $9000.

"It was a very special moment to see the artwork go to a special home," Mr Ryan said.

The majority of the framed blue tree prints on display also sold, as well as extra prints which Mr Ryan signed on the night.

Orders were also made for Mr Ryan's Blue Tree sketches and variations of the original painting, with Bailiwick Legal ordering a large personalised print.

Inspired by the colour pallet of the blue tree paintings, Mr Ryan used some of his other paintings to fill spaces on the walls with a couple of his own original canvas prints also sold on the night.

"A combination of the blue tree artworks and print variations with my latest oil paintings and the nice rustic charm of the wine barrels made the space look amazing," Mr Ryan said.

With people travelling from as far as Cunderdin and Busselton to attend the event, Ms Whyte said the exhibition was a great success.

"Given the year that has been 2020 and the fact that the AFL Grand Final was on the same evening, it was hard to know what to expect," Ms Whyte said.

"But I can proudly say that the event was a lovely evening filled with generosity, tears at times and many happy moments.

"It was a night of impact for many people and we were supported generously through the artwork and our merchandise."

Ms Whyte told Farm Weekly she would be winding down her work on the Blue Tree Project for the rest of the year to "practice what I preach and make sure I'm rested and ready to hit 2021 with force".