Wool producer Dirk Stevens said he has had to take the responsibility into his own hands, clearing labelling his bales with 'Non Mulesed' and 'Non Freeze Branded' to allow buyers to make informed purchasing decisions.

The decision to allow the cryogenic freezing process to be reported on the National Wool Declaration (NDW) as non-mulesed wool is continuing to widen the division between peak industry collectives.

Earlier in the year, AWEX upheld its former position to classify the liquid nitrogen-based freeze branding process as 'non-mulesed' on its NWD.

But according to the managing director of Fox and Lillie Rural, Jonathan Lillie, AWEX has completely undermined its position as a trusted independent and transparent service provider for the Australian wool industry.

"The truth in labelling is paramount to building trust in the wool we are selling," Mr Lillie said.

"By not following truth in labelling and allowing the market to make up its own mind about whether any new procedure or process adheres to their company's policy direction they are deceiving the entire wool supply chain."

"AWEX's position to allow cryogenic breech freezing to be declared as non-mulesed has not only been exposed by other industry accreditation platforms, which some buyers rely on to audit and authenticate the wool they purchase, but also their very own integrity standard, SustainaWOOL, who now require their woolgrowing participants to declare any form of breech modification they apply."

SustainaWOOL has been actively promoting its decision to change its requirements for participants to declare which form of breech modification they apply, citing that after extensive consultation with supply chain partners it was clear that they wished to know what breech modification process had been applied and therefore SustainaWOOL believed it was the appropriate thing to do. 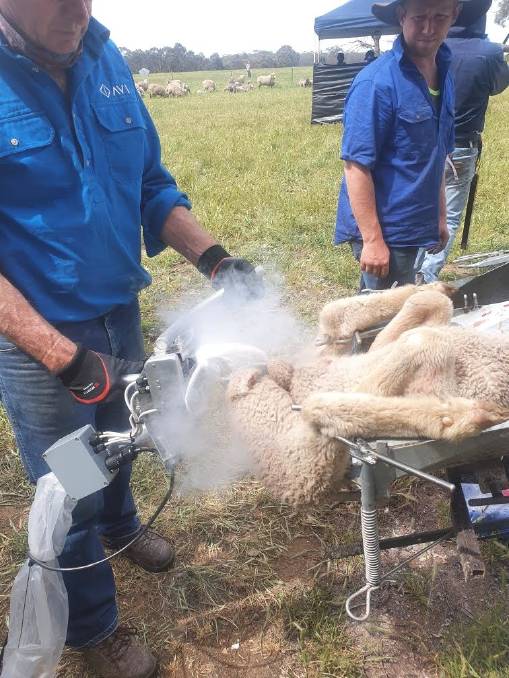 Earlier in the year, AWEX upheld its former position to classify the liquid nitrogen based freeze branding process as 'non-mulesed' on its NWD.

But AWEX chief executive officer, Mark Grave, highlighted the fact the NWD and SustainaWOOL are independent of each other, even though there are some elements in common.

"SustainaWOOL is a sustainability scheme and the NWD is a declaration that is across the industry for those who want to use it," Mr Grave said.

"SustainaWOOL looks at a whole host of other things, not just animal welfare. But the NWD focuses on mulesing, pain relief, and dark medullated fibre risk (DMFR).

"We made a decision on the NWD, we set the rationale at the time, and we are sticking to a process."

Mr Grave said AWEX understands and hears all of the views and criticisms, as well as those that speak in favour to the approach AWEX, has taken.

"We are not ignoring anything, but it is a case of we don't want to make knee jerk reactions. It's about going through a proper process and we will make sure that the review is a complete process."

He said ultimately, regardless of whether it is sustainaWOOL, the NWD, or any other program, it must be consistent and create certainty for everybody in the supply chain.

"That is, the buyers, the growers, traders, and those that are processing at the other end - they need to have complete transparency on the rules and definitions, otherwise it doesn't work," Mr Grave said.

"We are now 12 months on since the review started and I think we are probably better informed and I hope we will be at the time of the review, and we will stick to that process."

Yet Mr Lillie said after three rounds of consultation regarding the revision for the NWD version 8, the AWEX board has ignored the feedback by allowing growers to declare freeze branded wool to be declared has non-mulesed in the NWD citing that they are unable to make an informed decision until they receive the results of the pain trials.

"Fox & Lillie has been very vocal that AWEX has lost its opportunity to promote complete transparency in the Australian wool industry and should correct its flawed decision on the NWD," Mr Lillie said.

"Given AWEX has clearly defined mulesing as "the removal of skin from the breech and/or tail of a sheep using mulesing shears", then logically any new intrusive husbandry process such as breech freeze branding should also be clearly defined and given its own NWD definition.

"AWEX needs to advance in step with our wool consumers and understand that truth in labelling is paramount to building trust in the wool we are selling."

Dirk Stevens from Stevens Farming runs a 10,000 self-replacing Merino flock across a number of properties in NSW and Victoria and has been non-mulesed since 2004.

Mr Stevens said due to the lack of leadership from AWEX who have allowed cryogenic breech freezing to be declared as non-mulesed in the NWD he has had to take the responsibility into his own hands, clearing labelling his bales with 'Non Mulesed' and 'Non Freeze Branded' to allow buyers to make informed purchasing decisions.

Other industry platforms such as New Merino have also rejected the cryobreech freezing process being categorised as NM, as well as large, long-term customers of Australian wool, Vitale Barberis Canonico and Successori Reda.

What level of pain is caused by cryogenic breech freezing is not yet known with trials for the procedure currently being conducted at Melbourne University.