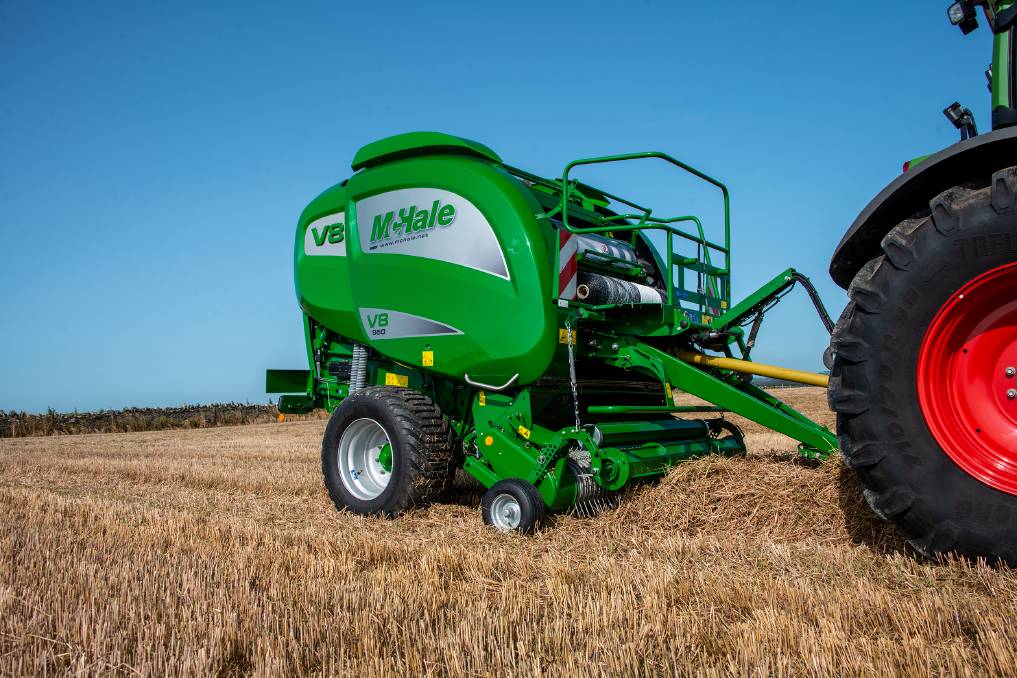 The new McHale V8950 variable-chamber baler is put through its paces in a straw crop.

Irish manufacturer McHale has added new models to its range of V8 variable-chamber balers after listening to customers in major overseas markets, including Australia.

IRISH manufacturer McHale has added new models to its range of V8 variable-chamber balers after listening to customers in major overseas markets, including Australia.

During the past three years McHale has worked with clients worldwide in both design and testing of its largest variable chamber baler, the V8, which can produce a bale up to 1.9 metres in diameter.

These high output machines are designed to produce dense bales from 0.6-1.9m in diameter.

McHale marketing and sales director Martin McHale said the increase in bale size and improved density meant the McHale V8 baler could produce bales with up to 30 per cent more crop in a 1.9m bale than what was achievable in a 1.68m V6 model baler.

"The new McHale V8 variable chamber baler range is fitted with heavy-duty components ensuring long life, high levels of reliability and a machine that is rugged enough to handle the toughest of crops and ground conditions," Mr McHale said.

"Our new V8940 and V8950 have brought baling to a new level with higher density, increased bale size, better intake and easier maintenance.

According to the company, it has increased the size of the lateral feed augers which direct crop into the rotor while also increasing the rotor diameter to improve intake.

All models come with a new adaptive intake which has been specifically designed to allow the intake area to automatically adjust to changes in material flow.

With all 15 knives engaged on the V8950, a theoretical chop length of about 65 millimetres can be delivered and knives can be engaged and disengaged from the tractor cab.

An optional selectable knife system is available which consists of two knife banks that allow for various configurations to be chosen to allow seven, eight 15 knives to work.

As standard, all machines come fitted with three heavy-duty endless belts, which are reinforced with synthetic material which ensures that the belts can absorb and apply high pressure to the material in the bale chamber.