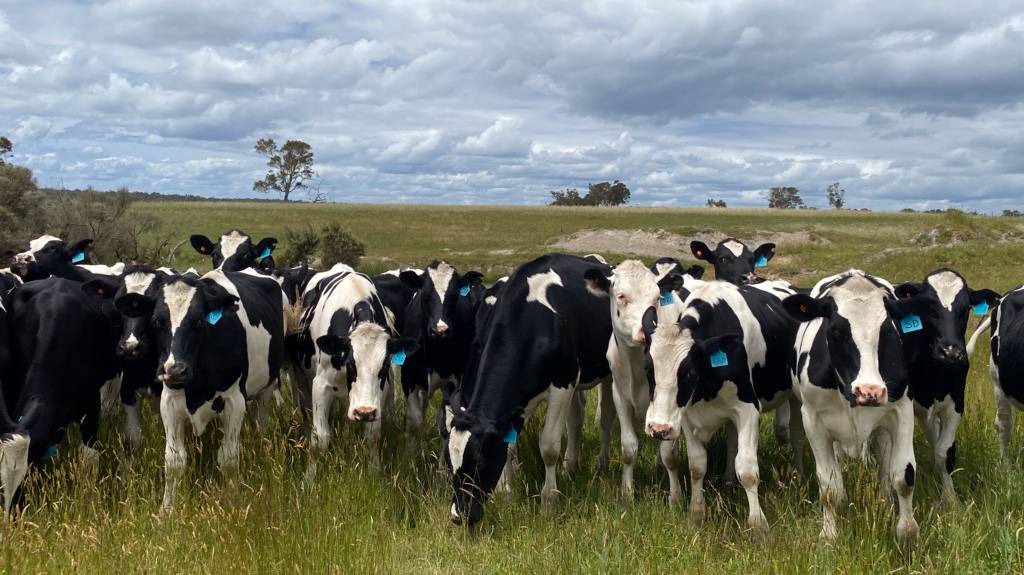 The yarding will be mainly beef steers & heifers, plus Friesian steers.

AN outstanding line-up of store cattle is what will greet buyers when they walk into the yards at next week's Elders Boyanup store sale.

In the sale on Friday, November 20 the Elders South West team will yard 1500 cattle, comprising of mainly beef steers and heifers as well as Friesian steers.

Elders South West livestock manager Michael Carroll said with recent rains prolonging the life of the grass in the South West, this sale would be an ideal opportunity to secure replacement beef and dairy cattle.

"In this November store sale we have a good range of beef yearling and weaner cattle mainly in the 300-380 kilogram range, ideal weights for growing out," Mr Carroll said.

"We will also have a large number of dairy steers being sold by both liveweight and appraisal with vendors doing an excellent job of preparing the cattle especially for this sale."

Kicking the sale off will be a good run of beef steers and heifers which will range from lightweights at about the 200kg mark right through to 420kg.

One of the biggest vendors in this section will be the Varis family, GB & SM Varis, Collie, with an offering of 53 Herefords (41 steers and 12 heifers).

The ownerbred, 8-10-month-old calves are based on Yallaroo Hereford bloodlines and are the family's complete drop.

Elders Harvey, Brunswick and Collie representative Craig Martin said the calves were extremely quiet and would be ideal cattle to turn out into the paddock for backgrounding.

Another big line of ownerbred beef cattle in the sale will be offered by H Hansman, Nannup, which has nominated 60 Angus and Simmental cross (30 steers and 30 heifers).

The majority of the cattle in the line will be Angus calves based on Gandy Angus bloodlines.

"They will weigh 320-360kg and will be ideal for the feedlot or graziers," Mr Tarbotton said.

Other bigger lines in the beef section will come from DJ & L Klein, Capel and Capercup Grazing, Moodiarrup.

Elders Capel representative Rob Gibbings said the lines were purchased in at 6-8mo and have been run through and were now ideally suited to grain or grass fattening.

When it comes to the Capercup Grazing cattle, its offering will comprise of 14 ownerbred Red Angus steers and 14 purchased in Shorthorn steers.

"They will be ideal for backgrounding," Mr Gibbings said.

Rounding out the bigger vendors of beef lines will be Woodview, Karridale, which has nominated 43 ownerbred Angus (20 steers and 23 heifers) aged 10-12mo.

"The steers will weigh from 360-380kg while the heifers will range from 340-360kg making them ideal for lotfeeders or a grass fattening program," Mr Williams said.

Friesian steers will also be a major category in the sale and they will range in age from 4mo poddies through to 24mo heavyweight steers.

In the older lines Dudinalup Pastoral Co and T & S Deruyter, both of Nannup, will present 16 and 15 Friesian steers respectively in the 22-24mo age range.

Mr Tarbotton said they were both very good lines of heavy steers which would weigh from 500-550kg.

Another of Mr Tarbotton's clients to offer black and white steers will be A & R Russo F/T, Busselton, which has nominated 34 steers aged 16-18mo that were purchased in from local dairies.

Mr Tarbotton said they are a good run of steers which will weigh around the 450kg mark and will be a good line of steers to put away and fatten for next year.

In the same age range G & CR Musitano, Brunswick, will offer 48 steers which were purchased as young cattle.

Mr Martin said the steers from the Musitanos are large frame and in store condition making them ideal for quick finishing.

Another good line of black and white steers will be offered by Warwick Grazing, Cowaramup, which has nominated 28 steers aged 14-16mo, which were purchased in and grown out now to a weight of 380-400kg.

In the poddy pens there will also be some sizeable drafts offered and the biggest of these will come from regular vendor Negus Enterprises, Tutanup, which this month will offer 55 ownerbred steers.

The steers are aged 4-6mo and have been dehorned and had all the health treatments.

Also offering numbers will be CA Panetta, Harvey, with 50 steers aged 6-8mo that have been bought in and grown out while P & T Duggan, Cowaramup, will present 40 ownerbred steers aged 8-10mo.

Mr Williams said the Duggan steers were out of a very good Friesian herd and would be ideal backgrounding cattle for future fattening programs.

There will also be numbers of first-cross steers and heifers offered in the sale with one sizeable line of Angus-Friesian heifers which should create interest, being trucked in by LJ & RA Brennen, Witchcliffe.

The Brennens will present 25 ownerbred heifers aged 6-8mo and Mr Williams said they would be suitable to purchase and grow out to be used as future breeders.