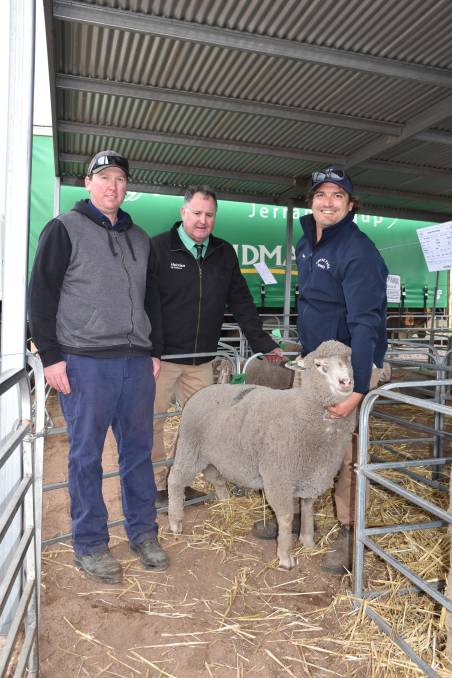 With ongoing feed and water issues continuing to plague a lot of areas that has seen thousands of ewes cross the border to new homes interstate, along with a depleted wool market largely influenced by the COVID-19 pandemic, the year has thrown up no shortage of challenges for WA's sheep producers.

And while the Dohne and Prime SAMM breeds followed the general trend seen across this ram sale season, the breeds absorbed the impact strongly with only minor reductions recorded across all indicators compared to last year.

With the breeds' strong lamb and carcase attributes combined with buoyant lamb and sheep meat markets holding throughout the year, the encouraging results showed producers have stuck with their breed of choice and were prepared to invest in new genetics.

This year, a total of 1292 Dohne and Prime SAMM rams were offered at sales throughout WA with a combined total of 1034 rams sold at auction at an improved clearance rate of 80 per cent.

While ram numbers offered were down to the equal second lowest amount in the past 10 years, they sold to solid values to record the fifth highest average from the sixth highest gross during the same period.

This year, 10 WA Dohne breeders offered a total of 909 rams at auction, with all bar one at standalone ram sales.

At the end of the selling season, 709 rams were sold under the hammer at a 78pc clearance rate and averaged $1276.

This equalled a $121 fall in average compared to last year's selling season and continues a gradual decline in average since values peaked at a 10-year high in 2018.

While several sales followed the collective trend, individually there were some encouraging results recorded.

Sales to improve their average from last year included Kintail Park stud, Jerramungup, with the biggest jump of $207 while Harold Park (North) stud, Coorow and the Far Valley stud, Arthur River, also lifted their sale averages by $27 and $11 respectively.

The Chirniminup stud, Nyabing, topped the breed's average stakes at $1626 and was closely trailed by the Kintail stud at $1618.

The Far Valley stud was another stud to record a sale average higher than the breed average at $1326, while another four studs averaged more than $1000.

Other Dohne sales to post stronger clearances of more than 80pc were the Denvale stud, Mt Barker and the Glenlea stud, Katanning.

The top price for a Dohne ram this selling season was sold by the Kintail stud for $4700.

The ram was purchased by return top-end commercial buyers at the sale Ray and Justin Edwards, RM & TF Edwards, Ravensthorpe, who also paid the next highest price of $4500 for another Kintail ram.

The next highest price of $3700 was sold at the Chirniminup sale by Tim Adams, PW & LF Adams, Kukerin.

The ram was by TR147388, a veteran sire that had been used in several eastern Australian studs, had current wool tests of 17.4 micron and 64pc yield and ASBVs in the top five percentile band for WWT +5.5, PWT and 172.2 index.

From the heights of 2010 when more than 2000 Prime SAMM rams were offered, just 383 ram were offered at sales this year, the lowest number of rams offered for the past decade.

But on a positive note, WA breeders collectively sold the same amount of rams as last year and while averages dipped $50, it was still the fifth highest average in the past 10 years.

Overall 383 Prime SAMM rams were offered at on-property ram sales with 325 rams selling at auction at an improved clearance rate of 85pc and average $1050.

While the overall results were back on last year, a couple of breeders decidedly improved their sale average.

Sandown stud, Badgingarra, recorded the biggest increase in average of $224 and the Shirlee Downs stud, Quairading, wasnt far behind with a $214 jump in average.

Shirlee Downs also led the breed average stakes at $1292 which was helped with the sale of five stud rams that averaged $2300 followed by Sandown at $1102 and the Tiarri/Uralla studs, Lake Grace, at $1045.

Tiarri/Uralla again recorded the biggest sale of the season for the breed with 116 rams of the 120-ram catalogue selling under the hammer for a 97pc clearance to gross $121,200.

The next biggest sale was Sandown with 65 of 68 rams cleared at auction at a 96pc clearance and gross $71,600, while the Royston stud, Napier, offered 60 rams at their sale.

The Ashbourne stud, Katanning, was another stud to record an extremely strong clearance of 94pc.

The $4000 top-priced Prime SAMM ram for this season was one of the Shirlee Downs stud rams offered at their sale and was purchased by the Tiarri stud.

The next highest price of $2800 was recorded twice for June 2019-drop rams at the Tiarri sale with both rams purchased by eight-year clients Cobley family, R & R Cobley & Son, Walkaway.

The first ram weighed 117 kilogram and was sold with wool tests of 21.4 micron and 99pc CF, while its scan figures from August were 46mm eye muscle depth (EMD) and 4.4mm fat.