Canola, barley and lupins are all yielding 10 to 20pc more than expected and the small tonnage of wheat already harvested is following the same trend.

Canola, barley & lupins are all yielding 10-20% more than expected.

GRAIN yields in Western Australia are predicted to be better than what was expected last month, with the Grain Industry Association of WA's (GIWA) November Crop report estimating the 2020 harvest to be almost 14 million tonnes, up 7.7 per cent from the October estimate of 12.98mt.

Canola, barley and lupins are all yielding 10 to 20pc more than expected and the small tonnage of wheat already harvested is following the same trend.

If this continues as harvest moves south, there could be further upside to total WA grain production against the current forecast.

Crop Report author Michael Lamond said the indication prior to the start of harvest was that grain yields were going to be higher than expected, considering the lack of rain during spring and lack of sub-soil moisture reserves.

"This is proving to be correct, with crops regularly exceeding insurance estimates by a fair margin," Mr Lamond said.

"For many growers, their crop water use efficiency is in uncharted territory, with greater than 20 kilograms of grain per millimetre of rain for cereals.

"The warm growing season conditions that pushed crop growth along, cool temperatures during grain fill, with few heat stress periods and minimal frost, have all allowed crops to convert every drop of rain to grain."

Intermittent rainfall events and cool weather from the start of the month have held up harvest operations across the entire WA grainbelt, causing it to be a very stop-start affair.

There have also been several severe wind events and pockets of hail where individual growers have lost grain.

"For most growers, harvest is now more about the potential deterioration in grain quality if we continue to receive late season rain events followed by cool weather," Mr Lamond said.

"There is already some concern around fungal staining in wheat in the north of the State and in barley and oats in the south."

He said screenings were high in barley and not a lot of loads to date were going malt grade.

"While most wheat varieties in the north should hold up on falling numbers given the several rain events, in the south there is already concern there may have been enough wet/dry days close to maturity for falling numbers to have dropped below acceptable milling levels," Mr Lamond said.

It is too early to make a comment on wheat grain size, although early signs are that while some loads have come in with screenings on the high side, most are expecting lower screenings than last year.

Canola grain yields to date have been very good, even in the areas receiving low winter rainfall, with oil percentages in the mid to high 40s, which is an exceptional result.

Lupin grain yields to date have also been very good in the north and central regions, however few milling oat paddocks have been harvested to date.

Mr Lamond said the Geraldton region had a difficult and later start than normal, with several severe wind events resulting in poor emergence for crops on the lighter soils or those soils which lacked stubble cover.

"The total rainfall in the region was very similar to 2019 where 1.4mt of total grain was produced, one of the lowest production years in recent times," he said.

"In contrast, this year the zone is on track for at least 1mt more grain than 2019, simply due to the timing of rainfall events and a cool finish with few heat shock events.

"It has been the distribution of rainfall, rather than the total amount, that has made the positive difference to production this year."

Barley grain yields are up on estimates with pre-harvest assessments of 2.2 to 2.3t/ha actually yielding closer to 2.8t/ha, quality is mostly feed due to screenings, with the current split on paddocks harvested about 80:20 feed to malt.

Fewer paddocks of wheat have been taken off so far and the small amount of the few lupin paddocks harvested have been in the 1.5 to 2.2t/ha range.

There has been a slow start to harvest in Kwinana South with several days of light rain over the past couple of weeks and few drying days in between the rains.

Grain yields so far have been returning 10pc to 20pc more than expected, consistent with the rest of WA.

In Kwinana North East grain yield reports have shown a huge range depending on whether they are situated close to the strip of summer rain that started near Dalwallinu and continued south east to north of Hyden.

Yields drop off dramatically to the east and north east to areas where there is little to harvest and plenty of wheat crops struggling to hit 1t/ha. 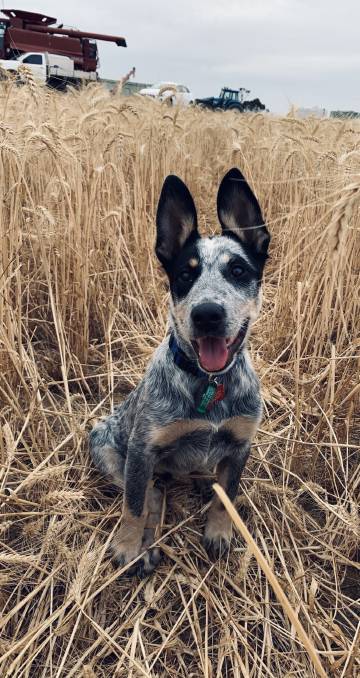 Blue heeler pup Arlo is enjoying his first time at a farm and first time in a wheat crop at Goomalling. Photo by Tayla Batty, Goomalling.

The West Albany region has had up to 80mm of rain in some places since the beginning of November.

"The pretty handy rainfall events that could have been useful a month or two ago have not caused too much damage to unharvested canola, although growers are worried about fungal staining in barley crops and falling numbers in wheat," Mr Lamond said.

"Early indication from canola harvested is that it is yielding more than expected with most going over 2t/ha, while crops in some of the dryer areas around Darkan have gone 2.2 to 2.3t/ha and some of the better regions east of the Albany Highway have gone 2.5 to 3t/ha.

"Harvest has a long way to go in the region and if indications from further north where more crops have been harvested continue to hold true, it is going to be another very good year for growers."

Between 20pc and 40pc of canola crops have been harvested in the Albany South region and there has been a bit of frost damage, so while the yields reported are representative of paddocks harvested so far, some have come in well under 1t/ha due to frost.

In the Albany East region, most of the recent heavy rain fell west and east, but crops harvested so far have yielded to expectations.

There are a few poor spots that will be well down on average yields as previously reported, although for most growers it is going to be one of the best harvests for several years, barring no major weather events.

In the Esperance zone, the current total grain production estimate for the zone is sitting just under 2.5mt.

Mr Lamond said there was still a fair way to go in the region and while growers have been targeting the better crops, there is potentially some further upside to current estimates.

"There has been some wind damage to crops accompanying the recent rain fronts and some wash in isolated places from the heavier dumps of rain, although most crops have not suffered significant yield loss yet," he said.

"Grain quality is possibly going to be an issue for both wheat and barley if there are too many more wet days, but all crops are yielding better than expected and some by a lot more.

"The lack of frost this year in the frost prone areas highlights what crops can do if they are not knocked about by frost in the spring."