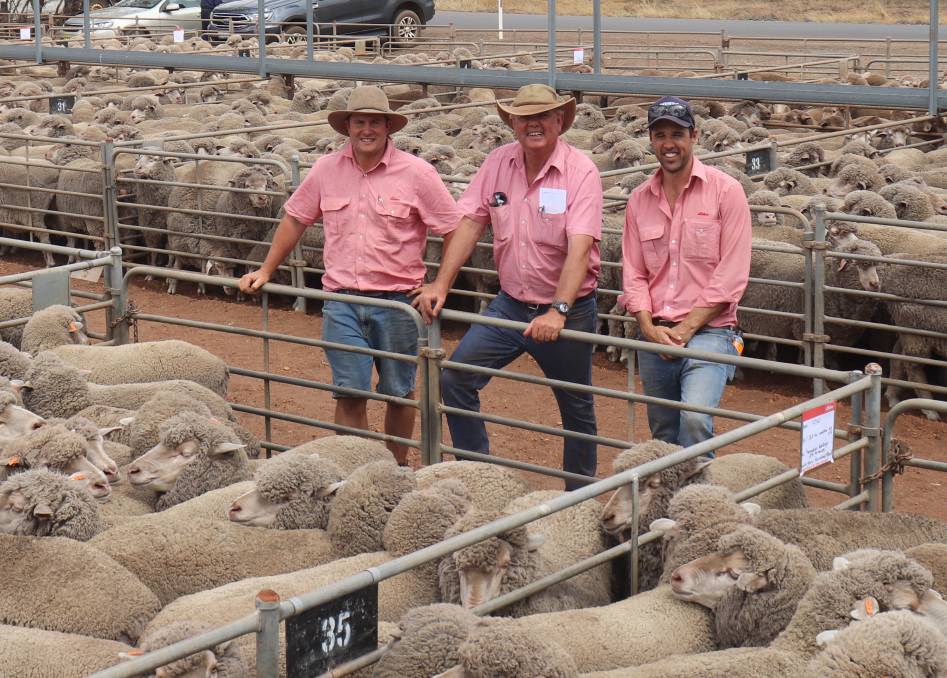 PRICES were pushed to a sale top of $258 twice at the second Elders Ewe and Lamb Sale for the season at Moora last Friday.

Overcast skies threatened rain but luckily held off for the duration of the sale.

Elders auctioneer Patrick Hannagan was willing to dwell on the lines as they were offered, allowing for bids to come in over the phone and encourage higher prices.

The majority of the ewe offering were 1.5-year-old-ewes, with the remaining ewes ranging in age from 2.5-5.5yo.

Elders agents once again interfaced the sale with AuctionsPlus and buyers on this platform dominated the sale, securing 11 lines, grossing $813,590 at an average of $183.

There were 51 registered bidders logged in to the sale on AuctionsPlus from New South Wales, South Australia, Victoria and WA which placed 306 online bids.

By the end of the sale 11 lines had been secured through the AuctionsPlus platform.

There was also 21 guest viewers logged in to watch the sale and the catalogue received 2228 views.

Achieving the $258 top price in the sale were two identical lines from Yargalain Holdings, Calingiri.

Both lines were made up of 556 Boorabbin blood, March shorn, 2.5-year-old ewes.

Paying the top price for the two consecutive lots was a New South Wales buyer operating on the AuctionsPlus platform.

Derek & B Mondello purchased just the one line in the sale, but he paid the sale's second top price of $244 for the first lot of the sale.

The line consisted of 243 Mocardy blood, August shorn, 1 .5yo ewes offered by Kondut. 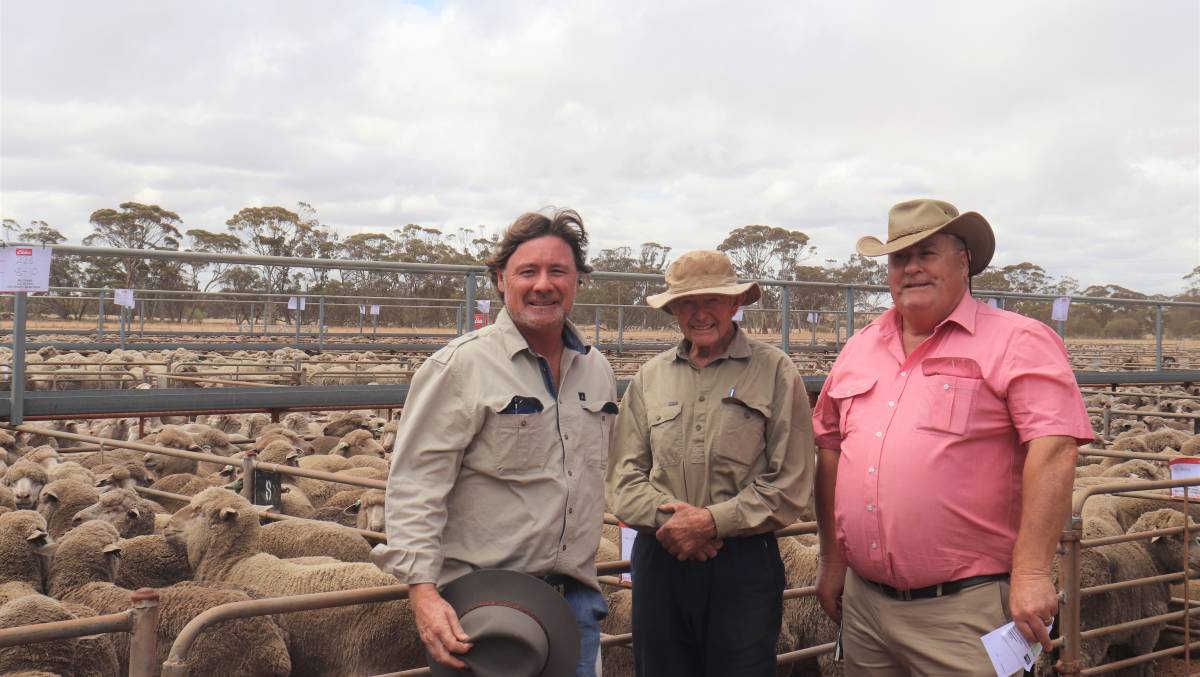 Eungai stud principal and vendor James McLagan (left), Frank Tierney, Walebing and Kevin Broad, Elders, caught up to look at the sheep prior to the sale at Moora.

Elders Moora agent Rhys Fleay was an active buyer, bidding on behalf of a Victorian buyer and by the end of the sale he had secured five lines averaging $195 a head for the Victorian operation.

The top price bid by Mr Fleay was $210 for a line of 190 Ejanding blood, April shorn, 1.5yo ewes from the Jones family, JS Jones & Sons, Ejanding stud, Dowerin.

Both lines were from Yargalain Holdings with the first including 612 Boorabbin blood, May shorn 3.5yo ewes at $223 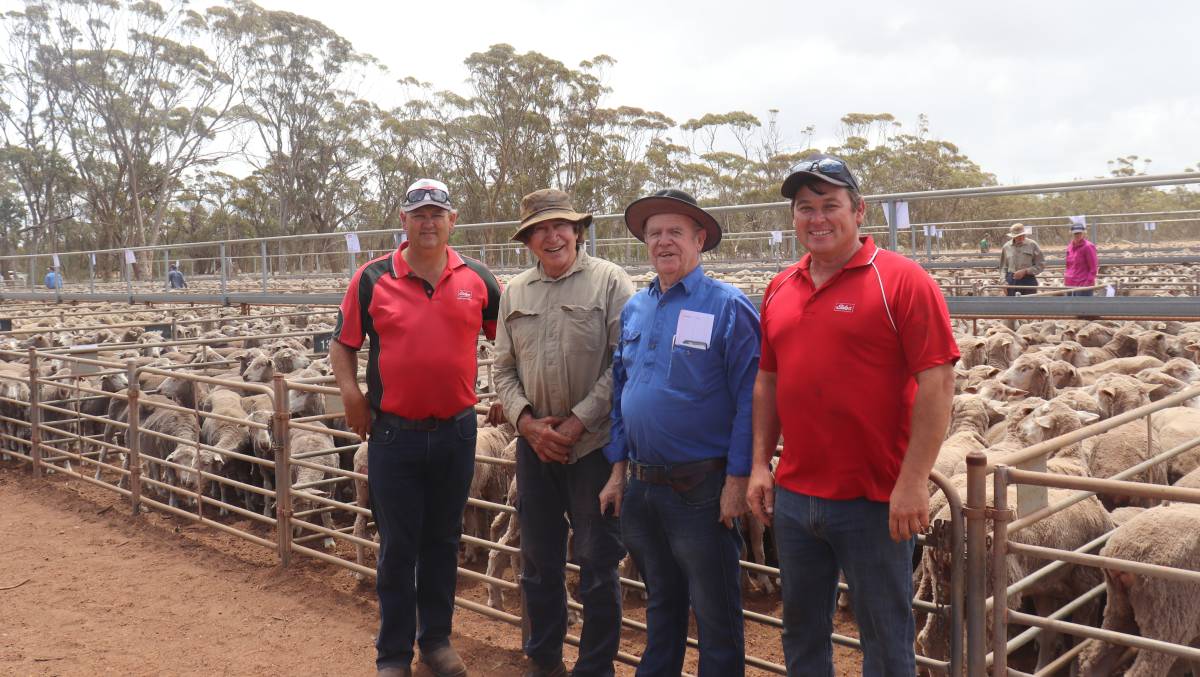 Elders Mingenew's Ross Tyndale-Powell (left), Wade Roberts, Dandaragan, Mike Oldham and Elders Mooras Dean McCuish, got together before the sale to inspect the lines on offer.

Moora operation PF Nixon not only sold a line of 1.5yo ewes in the sale it also offered up other age groups as part of a flock reduction.

It offered 2404 Glendemar blood, November shorn ewes in the sale ranging from 1.5yo through to 5.5yo.

Along with securing the Nixon ewes, the South Australian buyer also purchased at $207 a draft of 231 Sandhurst blood, April shorn, 2.5yo ewes from Ninan Farms Pty Ltd, Yerecoin and 563 Northwich blood, September shorn, 4.5-5.5yo ewes offered by D & WD Kelly, Wongan Hills at $162.

It finished the sale by also picking up all three lines of wether lambs offered.

The buyer bid to a high of $113 twice for the wether lambs.