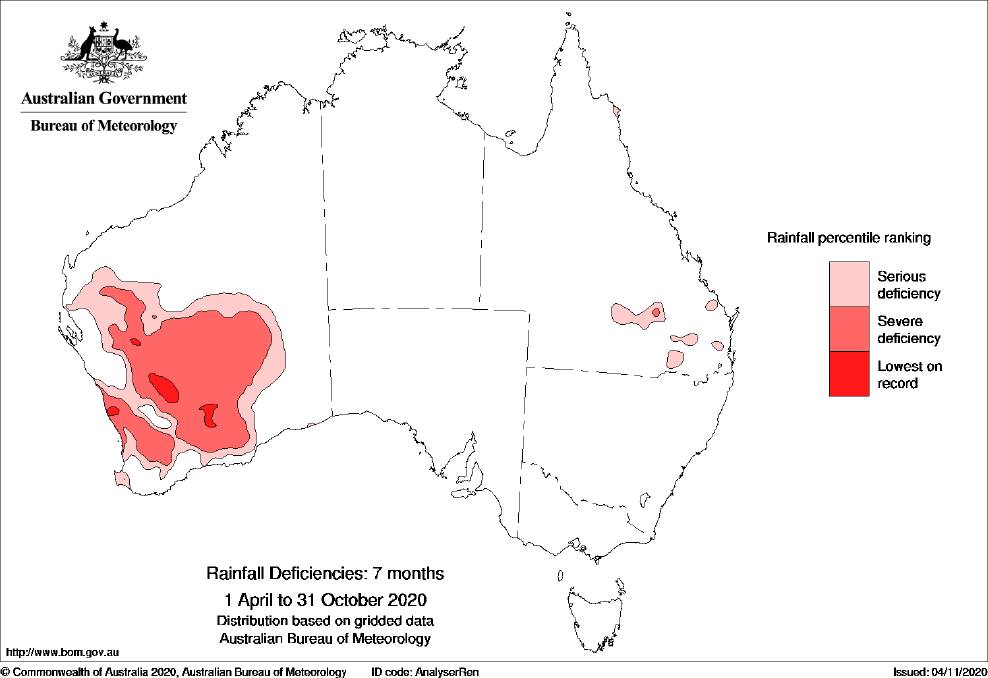 "Persistent, widespread, above average rainfall is needed to lift areas out of deficiency..."

WHILE it has been a wet start to November, rainfall over October was above average across much of the country, however it was below to very much below average for south western areas with accumulated rainfall deficits still persisting.

The Bureau of Meteorology (BoM) confirmed there had been serious or severe rainfall shortages for the seven months of April to October in the southern half of WA.

However the western Gascoyne, southern parts of the South West Land Division (SWLD) and the south east of the State were excluded from that. 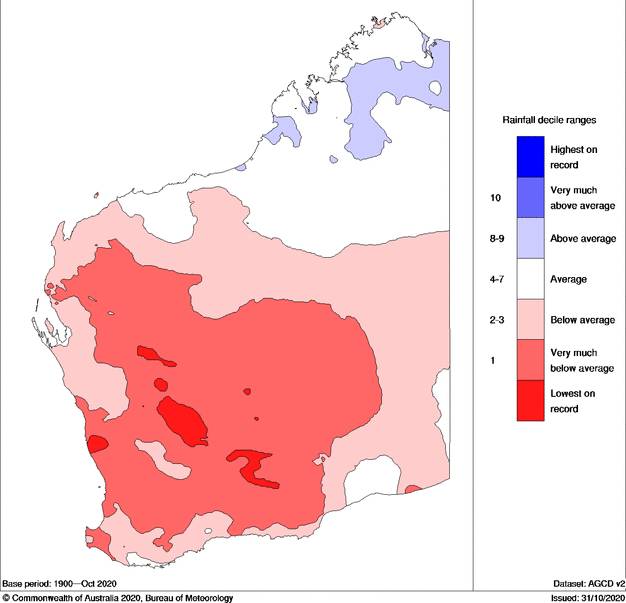 Rainfall decile ranges in WA for the seven months from April to October. The vast majority of the grain growing region was between one and three, meaning below average or very much below average.

"Area-averaged rainfall for the seven-month period was the seventh lowest on record for Western Australia's South West Land Division for April to October and the second consecutive April to October with rainfall in decile one," the spokesman said.

"Rainfall deficiencies have affected much of Australia since early 2017 and for periods longer than 24 months, the greatest impact of the prolonged below average rainfall has been in the cooler months of April to October.

"Persistent, widespread, above average rainfall is needed to lift areas out of deficiency at annual and longer timescales and provide relief from the impacts of this long period of low rainfall."

As a result of the below average rainfall, root-zone soil moisture has decreased across western areas compared to last month.

"Soils were drier than average for October across much of the west and south west of Western Australia and pockets of the inland Kimberley," the BoM spokesman said.

"The influence of very low rainfall over longer timescales is still evident in the 13-month soil moisture for October 2019-October 2020, which was very much below average over large areas, predominantly in the west and south of WA."

More recently, in the week leading up to November 10, good rainfall was recorded in the south west and south east areas.

In the middle of that week, a trough extended from southern WA to the Kimberley, with the system generating an active cloud band with thunderstorms, causing light to moderate falls over eastern parts of the SWLD.

At the end of the week, a strong cold front tracked over south west WA and an associated low pressure system brushed along the south coast, with a low to mid-level cloud band producing moderate falls in the south west areas.

Rainfall totals between 10 millimetres and 50mm were recorded in areas of the SWLD and the far south east of WA.

While the rainfall was useful for adding to dams, it simply caused headaches for farmers trying to harvest and did very little to help with the deficiencies in the State.