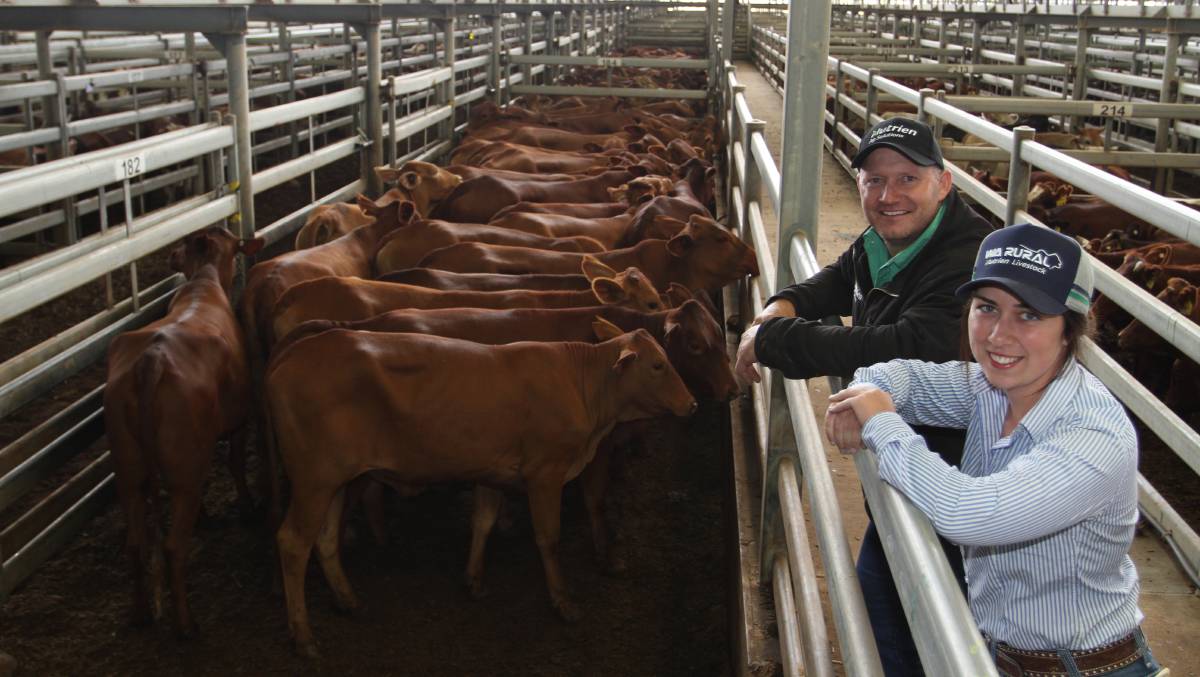 Numbers increased again on last month's sale at the venue with the Nutrien Livestock team penning a big yarding of almost 2500 head of cattle.

While there was greater local cattle numbers in the sale, like previous sales the yarding was dominated by pastoral descriptions, particularly big drafts of even, well-bred medium and lightweight pastoral heifers.

Strong local support battled it out against Eastern States' orders and combined with the sale being interfaced on AuctionsPlus, there was no shortage of demand, seeing values firm to strengthen across most categories.

The increased yarding of local cattle got the sale underway with a pen of 10 Angus steers averaging 471kg offered by Mt Samuel Pty Ltd, Mingenew, topping the sale's per head values at $1882 when purchased by Dean Ryan, Central Stockcare, for 400c/kg.

Graeme Brown snapped up the following pen of nine Mt Samuel steers weighing 422kg for $1705 and 404c/kg, one of two pens bought for a South Australian lotfeeding order. 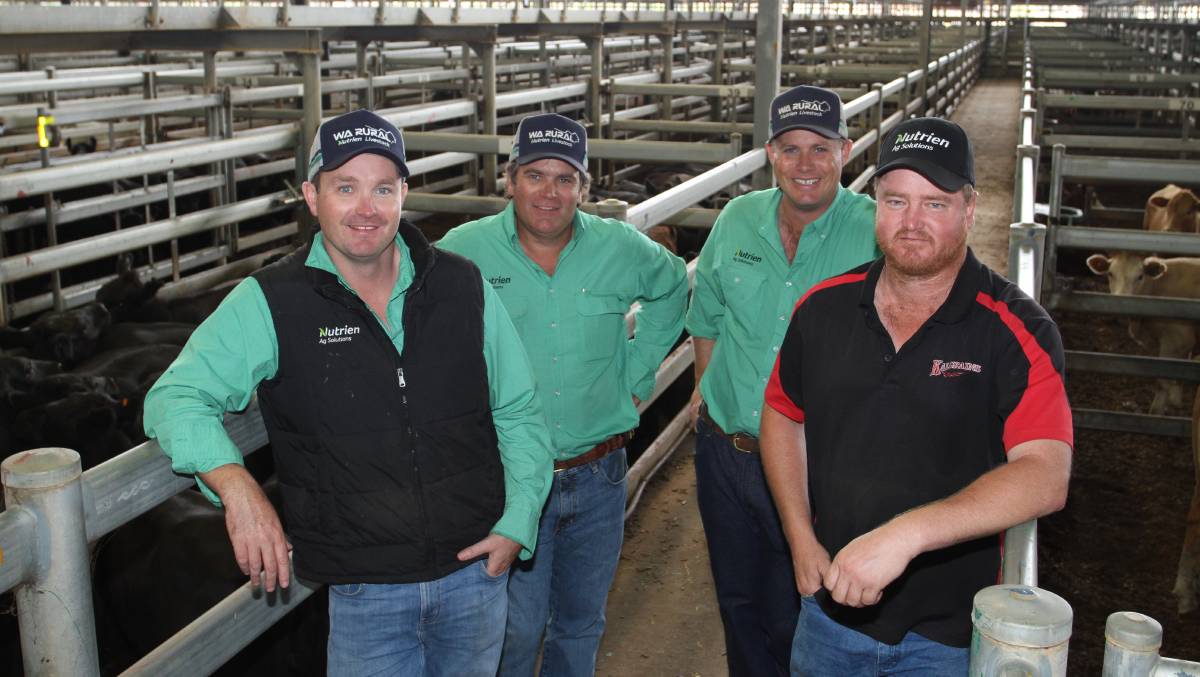 Mr Ryan opened the sale with a 424c/kg bid on a big line of 29 Red Angus steers averaging 393kg offered by Howatharra Grazing, Howatharra, to cost $1667 while Jamie Davies, Kalgrains, Wannamal, entered the market with 12 Charolais cross steers weighing 386kg also from the Gangemi family, costing $1653 at 428c/kg and would secure a further four pens of steers.

Liveweight prices peaked at 462c/kg for a light, even line of 11 Speckle Park steers weighing 218kg offered by GW & FL Thomas, Tungamah Speckle Park stud, Gingin and purchased by Leno Vigolo, WA Rural, Nutrien Livestock, for $1008, one of four pens of beef steers for this account.

Mr Ryan collected five pens of beef steers for a South Australian order and paid a top liveweight price of 460c/kg for the previous pen of the Thomas family's Speckle Park steers weighing 254kg to cost $1169.

Mt Samuel's Angus heifers also achieved top price honours for the beef heifer section with Mr Ryan paying $1622 at 382c/kg for the eight heifers averaging 425kg, while the scenario was repeated with their larger line of 23 heifers averaging 388kg knocked down for $1513 and 390c/kg. Nutrien Livestock Gingin agent Greg Neaves (left) with sale vendor and new Ardcairnie Angus stud owner Joe Dewar, FL & MJ Dewar, Gabbadah, with some of the Dewar family's Angus heifers that sold to 432c/kg and $1272 at the sale. The Dewar family offered 186 Angus, Murray Grey and Red Angus steers and heifers at the sale which topped at $1540.

A run of predominantly pastoral bulls was next up with the first pen of four Angus bulls weighing 449kg, offered by SW Richards & Co, Jurien Bay, purchased by Mr Brown for the top price of $1616 at 360c/kg.

Mr Brown continued to operate at the top of the market with a further 10 pens of bulls for his export order including the next highest price of $1459 at 354c/kg for seven Angus cross bulls weighing 412kg offered by Wooramel Pastoral Company, Carnarvon.

He also paid the top liveweight price of 402c/kg for a 342kg Simmental cross bull from Dalyup Simbrahs going to a local buyer for $1375.

Mr Ryan picked up four pens of pastoral bulls for an export buyer, paying to 370c/kg and $1113 for nine Angus cross bulls averaging 301kg from the Wooramel station draft.

The sale moved onto the pastoral steers with Mr Davies paying top dollar for a single 368kg Droughtmaster cross steer from GJ Finlay, Kalbarri, knocked down for $1303 at 354c/kg.

A large draft of 65 Hereford cross milk-teeth steers averaging 319kg opened this section, with Great Northern Cattle Company securing them for $1213 at 380c/kg and also added 18 two-tooth steers weighing 321kg of the same breeding for $1186 at 370c/kg.

The sale swung the corner to the extensive offering of pastoral heifers.

Apart from a couple of pens of pastoral steers, AuctionsPlus was quiet for most of the sale before bursting to life on the pastoral heifers to dominate this category.

An outstanding offering of 200 well-bred Droughtmaster heifers drafted into big even lines from Middalya station, Carnarvon, attracted plenty of interest and a premium.

Several buyers on AuctionsPlus battled it out with local competition and paid a $1272 top price at 376c/kg for the heaviest draft of 33 heifers averaging 338kg.

But it was the largest draft of 91 heifers weighing 222kg that made headlines when they sold for 448c/kg at $994 to AuctionsPlus.

A line of 16 Droughtmaster cross heifers weighing 306kg from GJ Findlay was knocked down to AuctionsPlus for $1162 at 380c/kg, while Ms Ogerly collected six pens of heifers, paying to $1123 at 404c/kg for 13 Santa Gertrudis heifers averaging 278kg offered by SW Richards and to 426c/kg liveweight for 14 Middalya station heifers averaging 191kg to cost $814.

The big run of Ashburton Downs Hereford cross heifers sold to $1106 at 360c/kg for 59 milk-teeth heifers weighing 307kg and to 376c/kg top liveweight value for 57 heifers of the same description weighing 223kg to cost $838 which were two of eight pens of Ashburton Downs purchased by the same buyer on AuctionsPlus.

Nutrien Livestock auctioneer and Central Midlands agent Rhys Hebberman said it was a good line-up of cattle which made excellent values in a strong market.

"Once again we received really strong numbers with a few more local cattle in this sale," Mr Hebberman said.

"Prices for local cattle quoted firm to a Monday trade sale at Muchea or a weaner sale down south but prices were still phenomenal.

"Pastoral steer values were firm to 10-15c/kg dearer and light pastoral heifers were up to 20-30c/kg dearer making up to 448c/kg.

"A lot of the better local cattle are remaining in WA but any suited pastoral type or local heifers are attracting big demand from the Eastern States and driving the price for future breeders.

"Nutrien Livestock's next store cattle sale at Muchea will be held on Friday, November 27, with another good yarding of cattle expected."