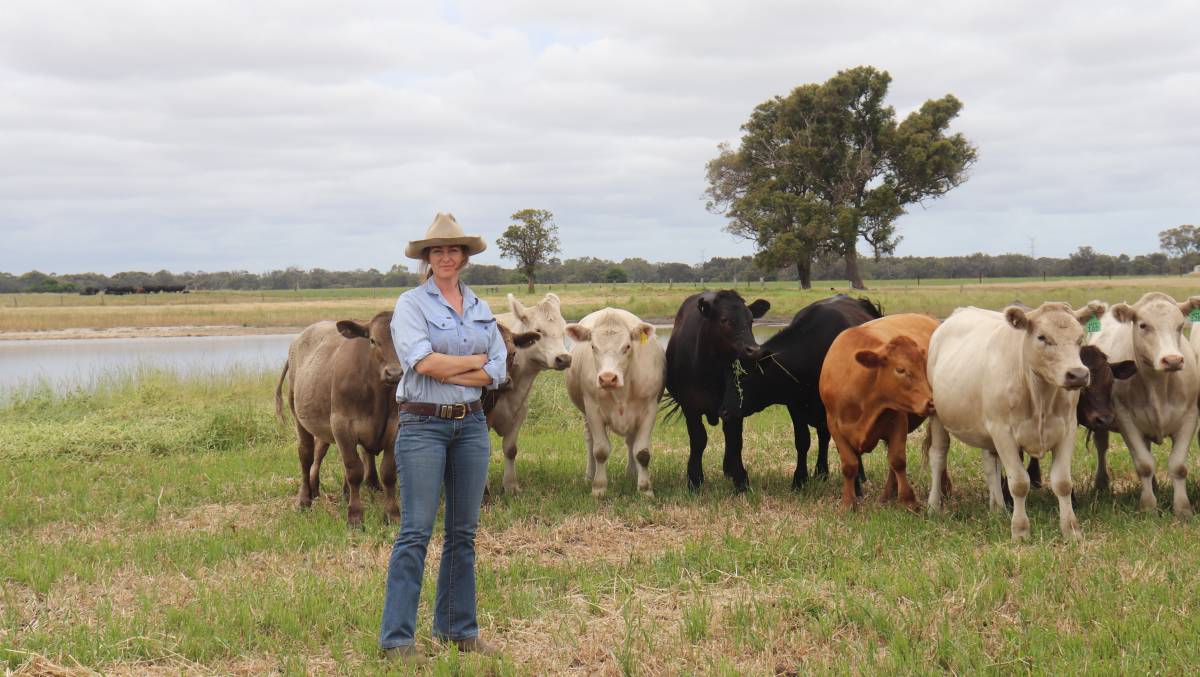 Ange and Trent Rogers purchased Millview Farm at Coolup in 2018. Ange is with some of their steers.

"We want to make sure we get a good return on investment."

IT'S slow and steady for the Rogers family as it builds up its cattle operation Millview Farm, Coolup.

Trent and Ange Rogers, along with their three children Caprice, Rustin and Sullivan, are the fourth-generation to farm the property.

They decided to purchase the family farm after Mr Rogers' parents put it up for sale in 2017.

Just down the road from the farm, they ran an earthmoving business and when the original sale of the farm fell through, they sold all their earthmoving assets and house to buy it, keeping it in the family.

"We did well out of the earthmoving business, but both of us would prefer to be farming," Ms Rogers said.

As they are only in their second year of working the cattle business, Mr Rogers still works as an earthmoving contractor during the week for extra income, leaving his wife to oversee the farm during that time.

"Trent would prefer to be farming full-time but it will be a gradual transition while we build up our numbers," Ms Rogers said.

The property was purchased by Mr Rogers' great-grandfather in the early 1900s and was later added onto with the purchase of additional land over the years for a total of 258 hectares.

The steers are usually 250-350 kilograms when Ange and Trent Rogers buy them in from the Boyanup saleyards and after growing them out, are sold at 500-550kg.

The Coolup farm was used to feedlot cattle that were sent down from the family's cattle stations in the North West.

The latest farm owners have managed to retain three blocks of 49ha for a total area of 147ha.

Ms Rogers said the name of the farm came about because there was a windmill on the original block and it is the last remaining structure from the original farm.

When it comes to running the farm, she said that they were in a unique position as most generational farmers work together, but with her husband's father in Broome, they have the freedom to stray from tradition and find their own path.

"There's no-one saying this is how you have to do it or this how we've always done it, we still ring Trent's dad and get advice, but it's good to be able to run our own race," she said.

The Rogers are running 20 breeders with a total of 200 head on the farm and hope to build up to 100 breeders over the next five years.

"Depending on the price, we'll buy another 20 head (breeders) each year and just keep chipping away building up our numbers," Ms Rogers said.

Their breeders are Santa Gertrudis heifers from the Hall family's Tanglewood stud, Piawaning, which are crossed with Angus bulls sourced from the Williams family's, Willarty stud, Coolup.

Santa Gertrudis were an easy choice with Mr Rogers' father Graeme previously running them on the property.

"It's what we know, Graeme used to have Santas up north on the station and he would bring them down to this farm and feedlot them," Ms Rogers said.

She said Santa Gertrudis were hardy, they held their condition well over summer and were good calvers and good mums.

The Angus cross is to appeal to the local market with some of their cattle being sold through the Boyanup saleyards.

The Rogers also buy in weaner steers from either the local Boyanup sales or Muchea, which they value-add, before selling them on.

The steers are usually 250-350 kilograms when they buy them and are sold at about the 550kg mark.

Ms Rogers said they were not picky on the market they sold their cattle into, selling some to live export, some to Harvey Beef and some through the Boyanup saleyards.

Their target with their own cattle will be to sell into the local market.

With the farm previously being a feedlot, all the infrastructure is still on the property, allowing them the option to feedlot their cattle in the future.

As for the market prices, when the Rogers were buying in their cattle, prices were reasonably low and they managed to buy in most of their cattle at $3 a kilogram, but that has changed over the past few months with the price of cattle rising.

"We bought in an average market and we will be selling into a higher market, so it's definitely a seller's market at the moment," Ms Rogers said.

Because of this she said they were hesitant to invest their money straight back into buying more cattle, waiting to see how the market will react in coming months.

"We are dubious to spend that money in this market, who knows what is going to happen, so we'll just take it steady,'' she said.

"We want to make sure we get a good return on investment."

When the Rogers returned to the farm they realised they needed to maximise their pasture production to feed the cattle, so they did some soil tests and invested in fertiliser to renovate the pastures and put nutrients back into the soil.

"It has been a slow process but we are getting there and we do our next soil test in March next year, so there will hopefully be an improvement," Ms Rogers said.

The cattle are 100 per cent grassfed with the natural pastures in the paddocks and are also fed hay.

"We do pretty well with our stocking rates and we don't really have to start (hay) feeding our cattle until March," she said.

"Tim probably grows some of the best grass in the district so we thought this would be a good learning opportunity for us and everyone gets something out of it," Ms Rogers said.

Joining is in August with the calves dropping from May 15 this year.

Ms Rogers said their bull performed well for his first joining as the pregnancy scans revealed 90pc of the heifers were in calf.

While they are building their numbers, fertility is important so any cows/heifers not in calf after pregnancy testing are sold.

This year was their first calving and it was drawn out over a few months, something they are aiming to tighten up next year.

The 2019 season was a good one, with plenty of feed available for the cattle in their first year.

"Last year we were probably understocked which was good for the pasture," Mr Rogers said.

"The idea is to grow steadily."

This season was a late start but it has worked out well for the Rogers with the rain falling at the right times.

"We had our hay done at the perfect time and in the paddocks we are getting that second burst of pick, so we've been pretty lucky," Ms Rogers said.

The family has big plans for the future, but remains patient to slowly build up.

In the next five to 10 years they would like to secure some more land, preferably a pastoral lease, to generate more income.

"We have to start somewhere, but that's the ideal plan," she said.

Ms Rogers said they were excited for the future and enjoyed working alongside each other.

"If you love what you do you'll never work a day in your life and we both love farming," she said.