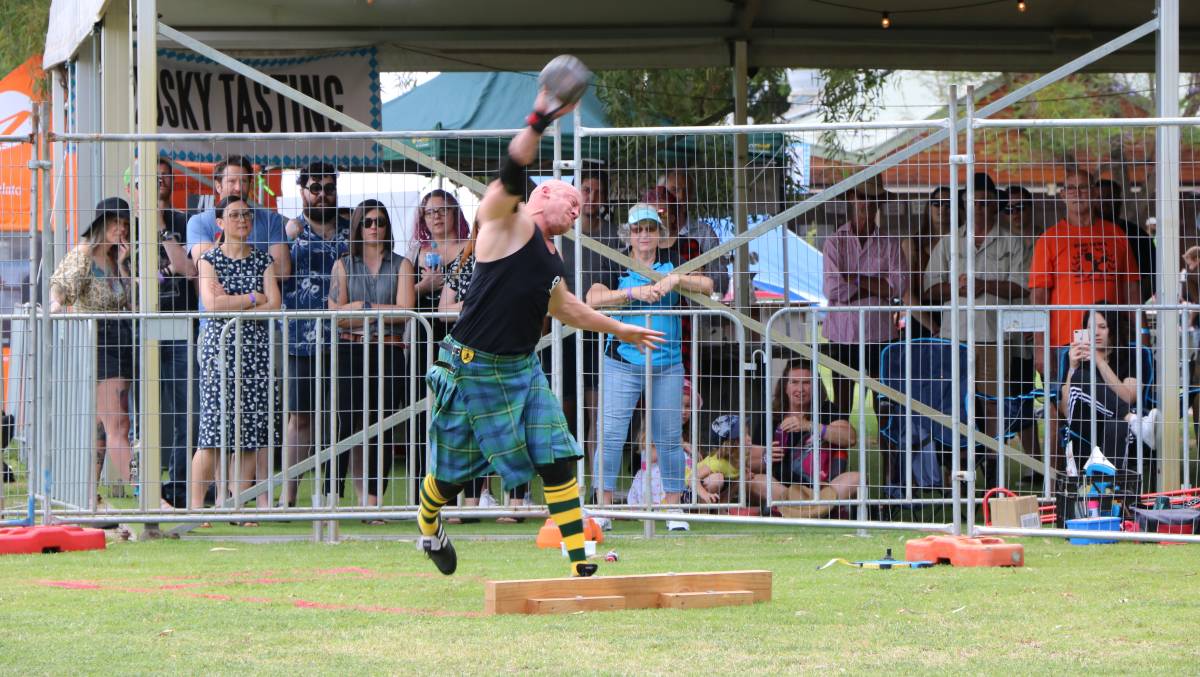 Highland Games deputy chairman Cameron Ford about to let loose during the weight throw at the recent Highland Games at Elmar's in the Valley.

The event was sold out in advance and provided a good chance for enthusiastic athletes known as "heavies" to show their mettle and keep the traditional Scottish heavy events alive in WA for another year.

Highland Games WA deputy chairman Cameron Ford, originally from a sheep and cropping farm at Borden, helped establish the association with two mates and their three partners two years ago.

It's not the first time WA has hosted Highland Games Heavy Events but full events with all throws have not been on offer regularly since the 1990s.

The intermittent years left a gap for those seeking to participate in the sport locally until Mr Ford and his mates decided to step in and fill it.

He said prior to the association being formed athletes had nowhere to compete in WA and they would have to fly to the Eastern States or overseas to improve themselves in a competitive environment.

"Somewhere like Perth, with such a big Scottish expat contingent - it would be a real shame to not have this," Mr Ford said.

"The Armadale Highland Gathering was basically all there was on offer and despite it being a great competition they were not able to run proper games' heavy events because of limited space." Mr Ford said the Highland Games provided a way to showcase the skills and abilities of local amateur heavy event athletes and was a place for them to prepare for national and international sporting events if they were keen to go to the next level in the sport.

He said the association has started to run events at regional agricultural shows and highlight the sport, which would hopefully attract more people to it.

Mr Ford recently competed against eight other athletes at the Kojonup Agricultural Show, and picked up the first place trophy and backed it up at the Swan Valley Highland Games, with another overall win.

Mr Ford has a background in bodybuilding - and at 185cm, and 110 kilograms, he is not the biggest of Highland Games athletes and has to mix it with other 'heavies' that are taller and weigh up to 140kg.

There's a good healthy camaraderie between competitors who are always trying to improve.

Mr Ford said "we often find ourselves encouraging others and giving positive feedback while competing against them in the same events".

"I've never seen a sport with this much of a supportive environment," he said.

The Highland Games have been held at Elmar's In The Valley for the past two years despite it being a German brewery.

"We started the association in 2019 - with a year prior to build up to that point by attracting and training members and finding a location," Mr Ford said.

"It was a nice choice to partner with Elmar's - beer and strength sports make for a good partnership."

The supporter base continues to expand and this year organisers were expecting up to 4000 people until COVID-19 restrictions were put in place.

Mr Ford said Elmar's would continue to be the location for the Highland Games in the foreseeable future however he is hopeful of more opportunities to compete in the future.

He said he liked participating in all the events and didn't have a favourite.

To compete a sports person only needs a basic uniform, which includes a games day T-shirt, long socks (Kilt hose), appropriate footwear and their clan tartan (kilt), although there are a few open tartans which they can wear if they don't have connections to a Scottish clan.

The House of Tartan, Perth, said on its Facebook page that it had a stall at the event and "it was an awesome day with the pipe bands and highland events".

"Great to see so many of our customers and meet lots of new ones too," they said.

The stall offered various items for sale including newly made tartan key-rings.

"At Highland Games WA Inc. we are mostly focused on the heavy athletics but bit by bit we are bringing more into it," Mr Ford said.

He said people competed for different reasons - some have strong Scottish roots, having immigrated from there and want to retain that connection with their family traditions.

"It has been mostly treated as a hobby but we want to grow it to potentially attract interstate athletes, provide coaching and seminars and be able to send athletes to other State's events," Mr Ford said.

"To do that we need to hold regular events and increase the quality of the performances to keep the sport growing.

"We have attracted 70 members in the past two years and currently have 35-40."

The heavy events sport is a solo sport and has its own technical aspects that new entrants would need to be aware of.

"You move the body to encourage the weight to travel.

"While some people rely on brute strength - there's some amazing athletes out there whose ability is mostly technique driven."

Mr Ford said they were keen to return to Kojonup next year, as well as other agricultural shows and would have been at the Dowerin GWN7 Machinery Field Days this year if it wasn't cancelled.

With the Highland Games, the City of Armadale's Highland Gathering and Perth Kilt Run, the Scottish community in WA is beginning to have a good range of events to attend and support.

The Armadale Highland Gathering has been run by the City of Armadale since 1994 with the addition of the Perth Kilt Run in 2013.

City of Armadale Mayor Ruth Butterfield said more than 20,000 people attended last year's gathering and it was one of the City's premier events.

"While this was a difficult decision (to cancel it this year due to COVID-19 restrictions), the Armadale Highland Gathering and the Perth Kilt Run will be back, better than ever next year," Ms Butterfield said.