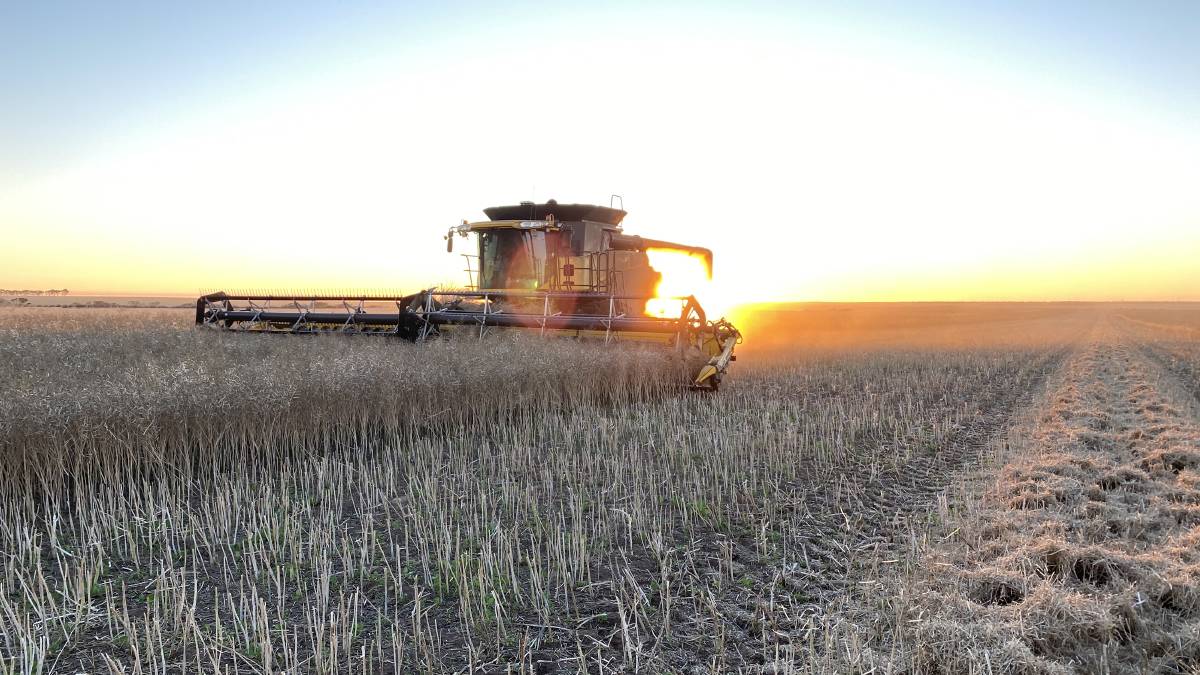 The last of a 1600 hectare canola crop at Lort River Station, 65 kilometres west of Esperance, was being harvested when this photograph was taken last week. After 10 millimetres of rain falling last Saturday and a couple of light scattered showers on Sunday, the farm owners were hopeful of starting their wheat program earlier this week.

THE 2020 harvest in Western Australia has continued to be a stop-start affair with harvest bans last week and rain on Sunday and Monday again slowing down progress.

Despite the interruptions caused by the weather, both wet and dry, more than 2.8 million tonnes of grain was received by CBH Group in the week from November 23-29, taking total receivals to 8.87mt as of Monday morning.

With harvest passing it's likely halfway point, CBH chief operations officer Ben Macnamara said it had been an extremely busy period across all zones.

"Since the conclusion of the ongoing period of poor weather at the start of this harvest, growers have been working around the clock to get their crops off while the conditions are right," Mr Macnamara said.

This led to their biggest ever receival day on Monday last week when 528,678t were delivered into 112 sites across the network.

"This record was broken despite none of our individual zones breaking daily receivals records, demonstrating the widespread nature of the ideal harvesting conditions across the grainbelt," he said.

However, the rain was back earlier this week as large parts of the grain growing area received rain on Sunday and Monday, with some spots along the south-west coast copping more than 15 millimetres.

While it was expected that the rain would again slow down harvest, as of Monday morning CBH was unable to give many insights on quality or timing, stating that would be clearer later in the week.

The Geraldton zone experienced it's highest weekly receival volumes so far, with more than 520,000t delivered, taking total receivals to 1.92mt, with 89,000t received on the record-breaking Monday.

Some growers in the zone are nearing completion, with more than 85 per cent expected to be done within the next week.

Good weather conditions have allowed for long harvesting days in Kwinana north, with the exception of last Tuesday when most growers within the zone stopped due to a harvest ban.

The zone had received 2.22mt as of Monday morning, more than 620,000t of which was received in the week prior.

Most growers are harvesting wheat, which has so far been of good quality with no falling numbers issues as yet, however, some growers are dealing with high screenings.

Harvest bans were also in place in Kwinana south on Tuesday and Thursday, causing some interruptions to the flow of harvest.

More than 540,000t was delivered to the zone between November 23-29, taking total receivals to 1.54mt at the beginning of the week.

Mr Macnamara said the widespread harvest bans implemented by several shires across the grainbelt last Tuesday significantly affected daily receivals volume, which dipped to a total of about 280,000t for the day across all zones.

"In the days since, we've received daily totals of more than 450,000t across the network," he said.

"When harvest bans are initiated, our team works closely with growers and their bin representatives to determine the most appropriate course of action on a site-by-site basis to ensure we're safely accommodating their needs where possible."

Receivals increased in the Albany zone, with the greatest volumes received so far this harvest at more than 600,000t.

Last Thursday was the largest receivals day for the season, with more than 113,000t delivered across the zone.

Quality has been holding up, with about 40pc of barley making malt grade and 80pc of oats grading as OAT1.

The Esperance zone has had a good week of deliveries - despite harvest bans and some drizzle, more than 550,000t were received for the week, taking total receivals to 1.75mt.

Lake Varley took a daily record on Monday of last week, with 6113t received and yields across the zone continue to be well above expectations.