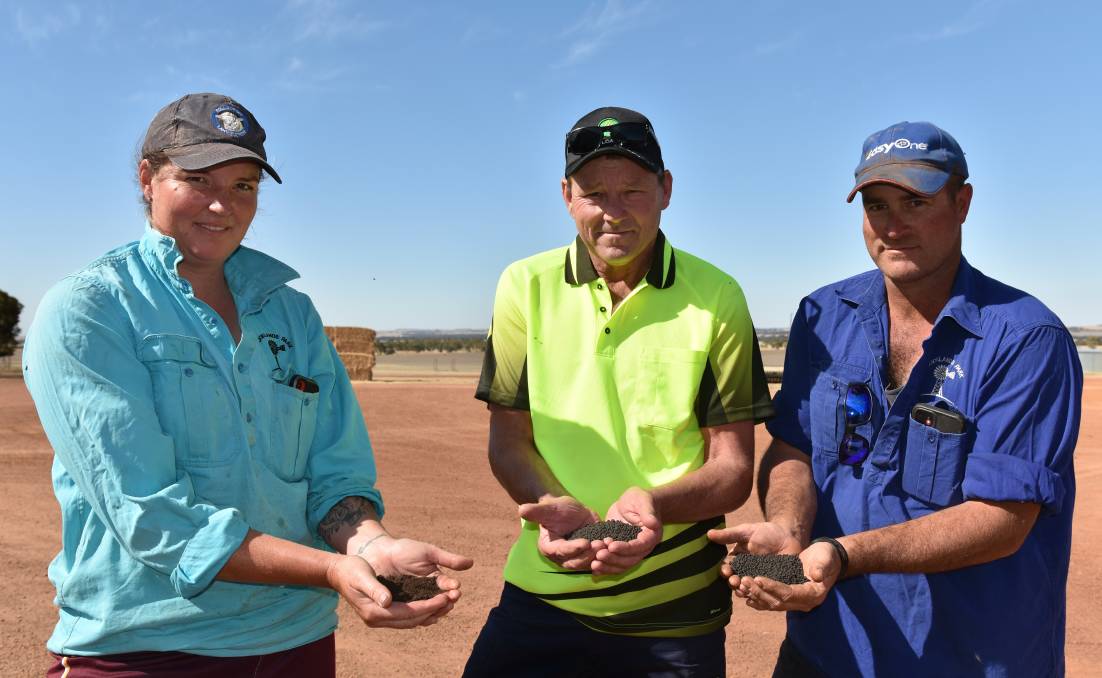 Growers keen to enhance their deep ripping and soil amelioration programs, soil health and nutrient availability and uptake, can take advantage of special discounts for onfarm trials next year.

GROWERS keen to enhance their deep ripping and soil amelioration programs, soil health and nutrient availability and uptake, can take advantage of special discounts for onfarm trials next year.

Developing carbon and liquid fertilisers company Carbon Ag is offering discounts to growers interested in undertaking their own co-ordinated trials of its product range.

In addition to the company's carbon pellet drilled at sowing and WA Broadacre Blend carbon compost for soil amelioration programs, Carbon Ag is launching a unique granule formulation in 2021 to enhance its application through seeding systems.

He was highly impressed with the results, especially with growing season rainfall of just 185 millimetres.

The family's 8000-hectare property comprises a significant portion of weak sandplain soils and Mr Edwards said they commenced the soil amelioration program after becoming alarmed at the "dead'' state of their subsoils.

"There was no organic matter, no carbon, no nothing," Mr Edwards said.

"We have issues with compaction and the problem at depth is low pH and high aluminium levels".

WA Broadacre Blend was applied at two tonnes a hectare and 4t/ha strips in the 100ha trial area and incorporated to a depth of 0.5 metres with the lime and gypsum, before the later foliar applications of the liquid fertilisers.

Mr Edwards said in an area of gutless white sand, yields ranged from 1.7t/ha with their normal seeding practice up to 3.2t/ha in the trial and from 2.9t/ha up to 4t/ha in better soil.

"I never thought I would see that production on that land - it's been one disappointment after another," he said.

"It's amazing what we can produce on such hungry soil with so little rain.

"The response to ripping after the Broadacre Blend was quite large and next year, in front of our amelioration program, we will be using Broadacre Blend, lime and gypsum, targeting problem areas.

"We have got the recipe now.

"In my opinion, the two (deep ripping and Broadacre Blend) go together because you're aerating the soil and you're adding carbon to the soil to bring some life into it.

"You need oxygen and you need carbon, so the two go together.

"Something in my gut tells me that carbon is needed more for the longer-term.''

Mr Edwards said Carbon Ag's new carbon granule for application at seeding also looked great and he definitely planned to "have a look at it next year''.

Meanwhile, the company's full liquid system of DKP, Bioprime and CalMag was also used for foliar applications with herbicides in a problem barley paddock and Mr Edwards said he was impressed with the yield responses.

"I can't believe the yields we are getting," he said.

"They are easy to use and with the Bioprime Trace, we dropped our herbicide rates by 10 per cent and the effectiveness was quite unbelievable."

Carbon Ag has conducted further trials of its products across the agricultural region this season, from Latham in the northern Wheatbelt through to Kulin in the eastern Wheatbelt, south to Borden and across to Esperance in the south east.

The company engaged independent research businesses SLR, a new development and extension research entity, and South East Agronomy Research to manage fully replicated plot trials at the Liebe Group site at Latham, as well as at Tammin and between Wittenoom and Neridup in the Esperance region.

A full trials report with yield results and return on investment calculations will be available from Carbon Ag after harvest.