Australian agricultural land with a level (at least 20 per cent) of foreign ownership was 13.8pc, as at June 30, 2020. Graphics: Australian Taxation Office.

CHINESE investors have continued to be the largest foreign entities with an interest (leasehold and freehold) in Australian farmland for a second consecutive year.

They increased their investments by 0.5 per cent, bringing Chinese interests' total area of Australian agricultural land to 9,199,000 hectares or 2.4pc.

United Kingdom investors remain the second largest overseas land holders, but they decreased this investment by a significant 9.5pc to a total of 8,166,000ha.

As such, the gap between the two largest foreign farmland owners has widened further, with all other countries having significantly less Australian agricultural property investments. 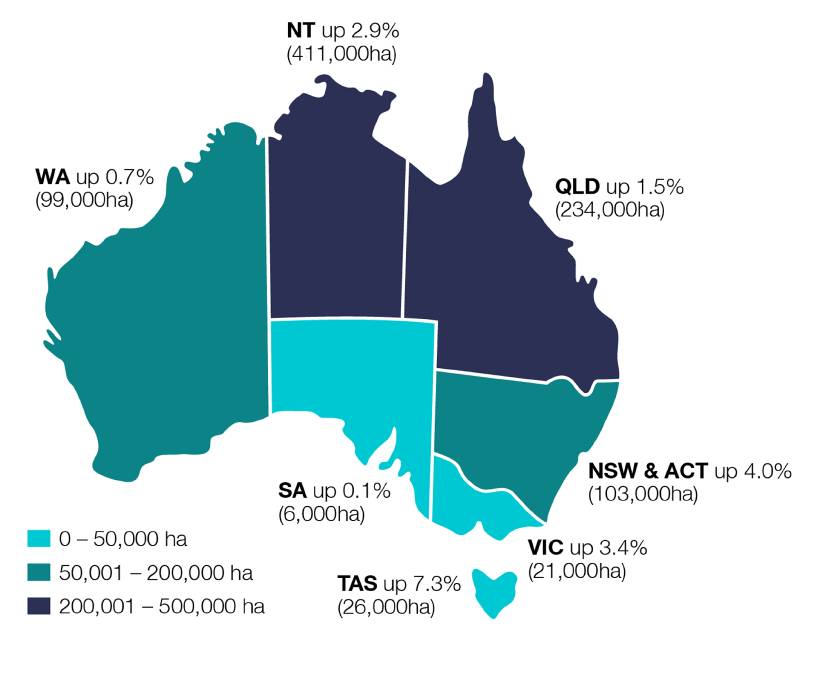 Dutch, US and Canadian interests all also increased their Australian agricultural property investments in the past year, whereas those from the UK divested some farmland.

These figures were part of a report by the Australian Taxation Office, which wrote that overall foreign investment of Australian farmland has increased by 1.7pc over the 12 months to June 30, 2020.

The number of agricultural foreign-held properties also increased by 9.4pc compared to 2019 to 853.

Each State experienced an increase in foreign investment, with Tasmania being the highest of 7.3pc.

New South Wales and the Australian Capital Territory had the second largest increase, with 4pc, followed by Victoria with 3.4pc, the Northern Territory with 2.9pc and Queensland with 1.5pc.

Overseas investment in Australia rose by 0.7pc and South Australia had the lowest increase with 0.1pc.

In total Tasmania has the largest presence of foreign held land out of all States, with 26.2pc.

In a close second is the NT at 25.8pc, followed by WA with 17pc of the respective State's farmland being foreign owned.

All States had an increase in the number of properties under foreign ownership, with NSW and ACT recording the most with 2450 properties.

Looking at the type of land use to the previous year, the most significant change was to cropping land, which saw an 8.8pc increase.

More than 85pc of foreign held farmland is utilised for livestock enterprises, which saw a 1.6pc increase.

WA is no exception to this, a 12,068,000ha or 86pc share of the State's foreign held land was used for livestock production.

However, the largest proportion of foreign investment in livestock land was in the NT, then Queensland and WA.

Cropping land made up 4.9pc of WA's foreign owned farmland.

There was a 2.6pc drop in horticulture land across the country.

WA had the highest percentage of foreign held horticulture land of 105,000ha or 35.7pc out of the country.

Overseas ownership in Australian forestry was most prominent in Victoria, followed by Queensland and Tasmania.

In the past three years cropping land has appealed the most to foreign investors, with ownership for that type of land increasing by 8.8pc, whereas grazing land has remained rather constant at 1.6pc, although it dipped considerably in 2018/19.

Of the freehold land held by foreigners, the Australian share dropped by 7.3 in the 12 months prior to June 30, 2020.

On the other hand, the foreign share of Australian foreign held freehold farmland increased by 7.5pc over the same time period.

It was a similar scenario for leasehold land, but to a lesser extent.

The Australia owned proportion of overseas held leasehold land declined by 0.4pc, whereas the foreign share increased by 1.5pc.

Although the majority of overseas foreign investment in agricultural land is leasehold, the report suggests freehold is increasing, albeit slowly.

NOTE: The register records foreign person entities who have a foreign ownership share of at least 20pc or more, therefore there may also be a significant portion of Australian ownership in those same parcels of land.