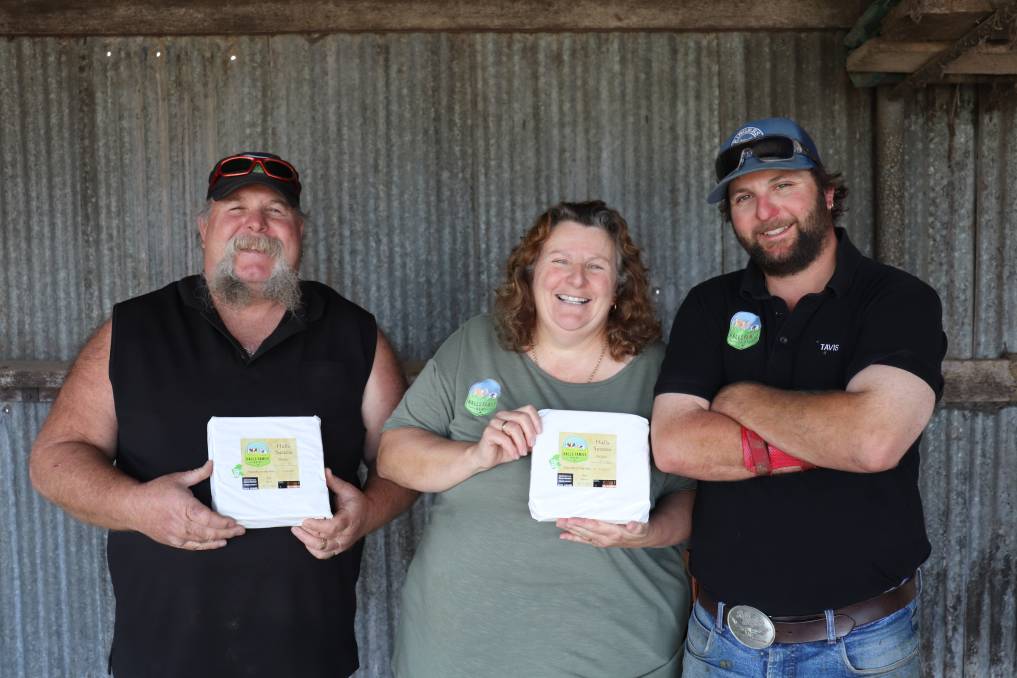 LOOKING to produce a value added product for their dairy business and living next door to a cheese maker - it made perfect sense for the Halls family to branch into the industry in 2017.

After ordering a cheese board at their local brewery and being $44, Phillip Hall turned to his wife Suzanne and said they should have a go at producing a more delicious cheese for a cheaper price.

And since planting that seed they have, with their soft washed rind cheese, Halls Suzette, now the go-to artisan cheese for high end restaurants, chefs and specialty cheese stores.

Made in the style of a French Pont l'Eveque and with a smooth creamy centre, the Hall family milks the only herd of pure French Normande cows to produce cheese in Australia.

"I was flipping through a European magazine one day and saw a picture of a Normande and it just intrigued me," Mr Hall said.

"So I wrote a letter to a semen company in France to see if we could import the Normande semen into the country."

The whole process of contacting France, getting a reply, accessing and importing the semen to Australia took the Halls about a year.

The Halls crossbred three of their cows with the Normande semen, with two of the cows producing heifers, which were the beginning of the nucleus of the herd.

"Over the past 20 years we have cross bred those back to Normande each time, so after six generations they are now 100 per cent pure," Mr Hall said.

The family also imported embryos from France in 2013 and implanted them in their cows, resulting in two purebred French Normande girls as well.

"Getting the embryos was a long and difficult process because everything has to go through a vigorous testing program to make sure they don't bring any diseases into Australia," Mr Hall said.

"The embryos cost us $1500 each and we bought five and they were all girls.

"Generally they say if you have a 50 per cent success rate you are doing well and we ended up with two live calves out of the five embryos we implanted, so we were happy with that."

Today the Halls milk nine of their 30 Normande cows, which they keep separate to their dairy herd.

"We feed the Normandes differently to the rest of our cows, giving them grass once a day, then they have hay and we supplement feed them lucerne hay every second day to help keep their butter fat up for cheese production," Ms Hall said.

After researching the types of cheese the Normande cows milk could be used for, she approached renowned West Australian chef and close family friend Don Hancey for his advice. The Halls milk the only purebred herd of French Normande cows in Australia to make their cheese.

As no one in Australia was making a Pont l'Eveque at the time, Mr Hancey suggested they make that style of cheese to give their product a point of difference.

Ms Hall then approached local artisan cheesemaker Robert St Duke, from Harvey Cheese, to find out the cultures that were required to make the cheese.

"In our initial batch, we used about 60 litres of milk and after two weeks we picked up the cheese and it was mediocre, so we ended up just giving it away to family and friends," Ms Hall said.

"But after some trial and error our next batch came out brilliant, so we took it to Don and he was absolutely blown away."

Over a two week period the cheese is washed in a brine solution which helps give it its stronger flavour.

The versatile Suzette is the perfect addition to cheese boards and is used by numerous Western Australian chefs for anything from desserts through to risottos.

"Don introduced us to some of the State's top chefs and then it was just up to us to get out there, knock on kitchen doors and ask chefs to try it," Ms Hall said.

"It was really tough selling it the first six months.

"I used to send off 20-30 emails a day and get hardly any replies but then word of mouth made our sales take off, so now it's at the point that we're struggling to keep up with demand."

In an effort to keep the French tradition, the cheese is sold in eight inch square blocks which range from 1-1.5 kilograms.

Supplied to about 20 high end specialty stores, Suzette can also be found on the menus of some renowned WA restaurants from Yallingup to the Swan Valley, including Angels House Fremantle, Bread in Common, 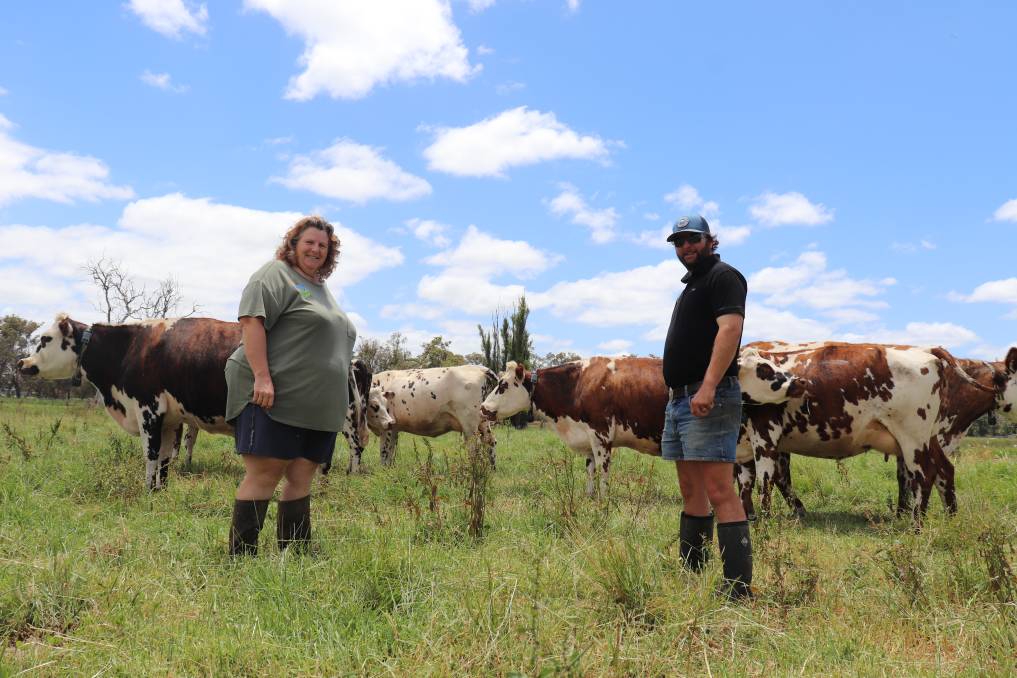 Suzanne and Tavis Hall in the paddock with their French Normande cows that produce the milk for their artisan cheese.

"We have chefs that have moved and sought for our cheese to be supplied at their new restaurants because they like it so much," Ms Hall said.

Since founding their cheese business, the Halls spend much of their week delivering their cheese all over the State and have made many new friends through their business venture.

"We've met some amazing chefs and it's a great outlet for Phil and I to get off the farm," Ms Hall said.

Mr Hall said they created the cheese business with a goal to provide more security for the next generation of their family and thereafter.

"It's a high end commodity that pays better than just selling milk and, unlike the dairy industry, we can command the price we want rather than be paid the price we're told," Mr Hall said.

As the Halls focus on expanding their cheese business, they know their dairy business is safe in the capable hands of their son Tavis, who manages most aspects of the farm.

"We get up at 3am in the morning, milk the cows, feed those that need feeding, find whatever is broken for the day, fix it and might find something to eat ourselves before we milk the cows again in the afternoon," Tavis said.

"This time of year we have just finished hay and silage, we move the cattle between different properties, manage the calves and the machinery."

The Halls plan to eventually branch out with three or four products while keeping their finger in the dairy industry, perhaps with a smaller herd of dairy cows.

"Our cheese business has really opened the door for what else is possible with our cows and in our industry," Mr Hall said.

"We would like to make a few different cheeses, use our Guernsey milk to make some Guernsey butter and we are doing branded dairy beef as well now which is going extremely well.

"We think diversifying the business will help create a better lifestyle and more sustainable business for Tavis and the generations to come."

Both Phillip and Suzanne Hall's families have a long history in the dairy industry, with Mr Hall's family history dating back to the 1880s.

Six months after buying the dairy farm from his parents Arthur and Gayle in 1999, the industry deregulated which resulted in the Halls losing 48 per cent of their income overnight.

"Before that you purchased a quota which gave you a licence to supply x amount of litres and you were guaranteed a set, high premium price for that," Ms Hall said.

"Our price dropped from 52 cents to 27c which was unviable, so we supplemented our income by purchasing a lot of heifers and exporting them all over the world.

"We had a young family so that's just what we had to do in order to survive."

But despite the numerous challenges thrown up by the dairy industry, the Halls emphasise that they are dairy farmers first and foremost and that they love milking their cows.

"I have pictures of my grandmother tethering two cows to a tree and milking them in a paddock and when my dad started he was milking 40 cows," Mr Hall said.

"Now we have grown the business to 185 dairy cows and we will do whatever it takes for us to stay in the industry.

"When I left school, after a period on the farm I went into mining for four years and my best day in mining is not as good as my worst day on the farm.

"That is how much I enjoy farming."