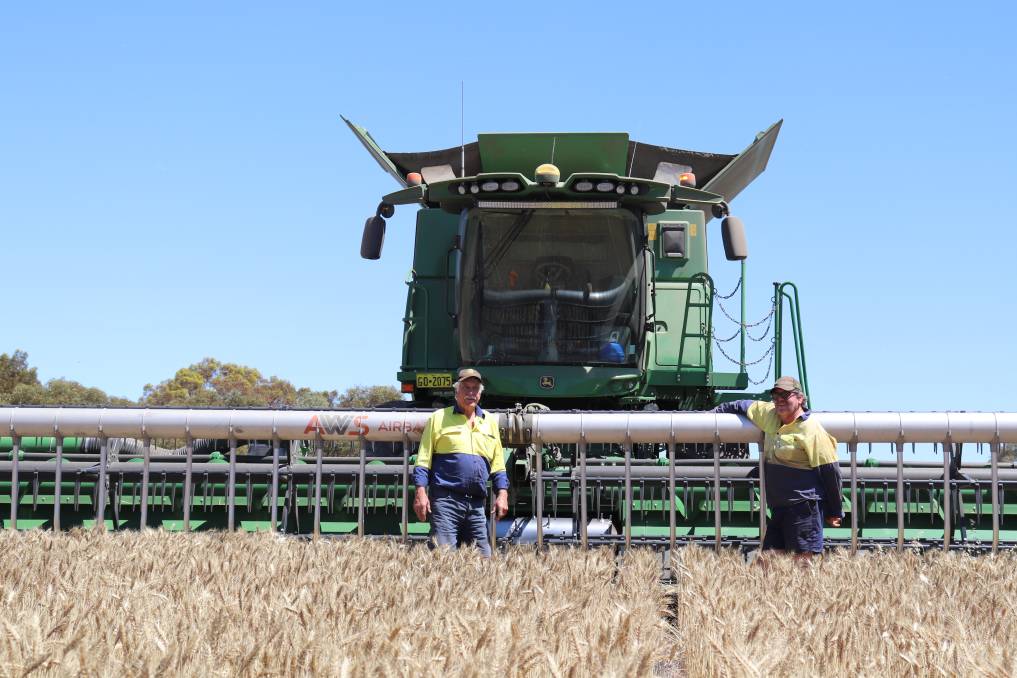 Barry Haywood (left) with his son-in-law Lyndon Bird. Barry and his son's Jason and Simon Haywood joined their farming enterprise in Goomalling with Lyndon and his son Tyson about five years ago to help with the worker shortages they were experiencing at the time.

"Obviously the money gets made with those finishing rains..."

GOOMALLING farming families, the Birds and Haywoods joined forces in 2017 when a worker shortage was affecting both their operations.

Farming in the same shire, husband and wife Lyndon and Mandy Bird and their son Tyson joined their operations with Mandy's brothers, Jason and Simon Haywood, father Barry and mother June, to form the Haywood Bird Farms.

"Our farm wasn't as big as the Haywoods', so we were always looking to lease land and ended up leasing some of their's," Lyndon Bird said.

"Simon wasn't working on the farm at the time and Barry was wanting to slow down a bit so we decided we might as well join up and work as one big operation and share our capital costs.

"We haven't looked back since."

Having started harvest early for the 2020 season on October 25, the Birds finished prior to Christmas.

Cropping about 5200 hectares of wheat, barley, canola and lupins, the Bird family's crops were yielding relatively well considering the amount of rainfall the property received this growing season.

"We're nowhere near as good as 2018, but our crops seem to be yielding better than last year," Mr Bird said.

"The rainfall between properties in the Goomalling area has varied significantly this year.

"Whereas a lot of people missed out on summer rains, we had reasonable summer rains and we got about 200 millimetres for the growing season, so our property has probably had one of the higher rainfalls in the district.

"You don't have to go very far either side of town before the rainfall drops off considerably."

Mr Bird said the property received about 30mm two months too late in November when they were in the process of harvesting.

"Obviously the money gets made with those finishing rains and we didn't get too much of that towards the end," Mr Bird said. Lyndon Bird and Simon Haywood are both John Deere advocates and drive the green headers each harvest.

The Haywood farm ran sheep for some time but had only been mixed cropping for the past 13 years.

Like most other farms in the Goomalling area, the farm has used GM canola for the past eight years and been trialling the Hyola 404RR, Hyola 410XX, 43Y23 and 43Y27, 4022 and Nuseed raptor varieties for the past couple of years.

Mr Bird said he had found there was a catch-22 situation in that some of the varieties that yielded quite well had a lower oil content, while others that didn't yield as well had a higher oil content.

"This year our canola yields are a bit down from what we thought, so we will sit down after harvest and have a look at all of the data to determine what varieties to put in next year," Mr Bird said.

Over the years the farm has substituted some of its canola crop, which usually forms about 25 per cent of its cropping rotation, for lupins and increased their barley hectares.

Pleasantly surprised with their barley yields this year, at the time of writing their barley crop was looking like it would be 70:30 Malt feed.

With Scepter, Havoc, Chief, Ninja, Devil and Trojan varieties making up their wheat crop, Mr Bird said the dry finish had affected the crops yield but not the quality of the grain.

John Deere advocates, Lyndon and Simon drive their two John Deere headers and all of the farm's data is loaded automatically into the cloud including yield, variety, and the rate and speed it was sowed at.

Jason and Tyson manage their two road trains along with their casual workers Ben McGill and Peter Coulthard, who drive the chaser bin.

Barry, who is Goomalling Shire president, also has an active role on the farm, helping out during seeding and harvest.

Over the past 20 years Mr Bird said the pH of their crops' soils had been pretty good and that they had applied roughly five tonnes a hectare of lime across the farm.

"Depending on our summer rain, we deep rip every year if we can and use some non-wetting stuff as well," Mr Bird said.

Despite a few aphids and some budworm in their lupin and canola crops, pests hadn't posed a big problem this year and the family had managed to get a header fire under control in early December, before it caused any damage to their equipment.

With both the Haywood brothers and Mr Bird being third-generation farmers, Mr Bird said farming had afforded him and his family a great lifestyle.

"I love being out in the open each day and could never work in an office environment," he said.

"I think COVID-19 has really highlighted the positives of living in the country - we still went to work every day and nothing really changed for us.

"I have a young granddaughter and another grandkid along the way and it's a great environment for kids to grow up in."

The Birds have two sons, Tyson who qualified as a mechanic before returning to the farm and Jaydon who is a carpenter by trade and their daughter Tahnee, who works at the local shire offices.

"Tyson really enjoys working on the farm so you get that satisfaction when your kids love it too," Mr Bird said.

"There's never been any pressure on either of them to farm, it's completely up to them what they decide to do.

"What we've found, living in a country town, there is always help at hand and the community really gets behind you."