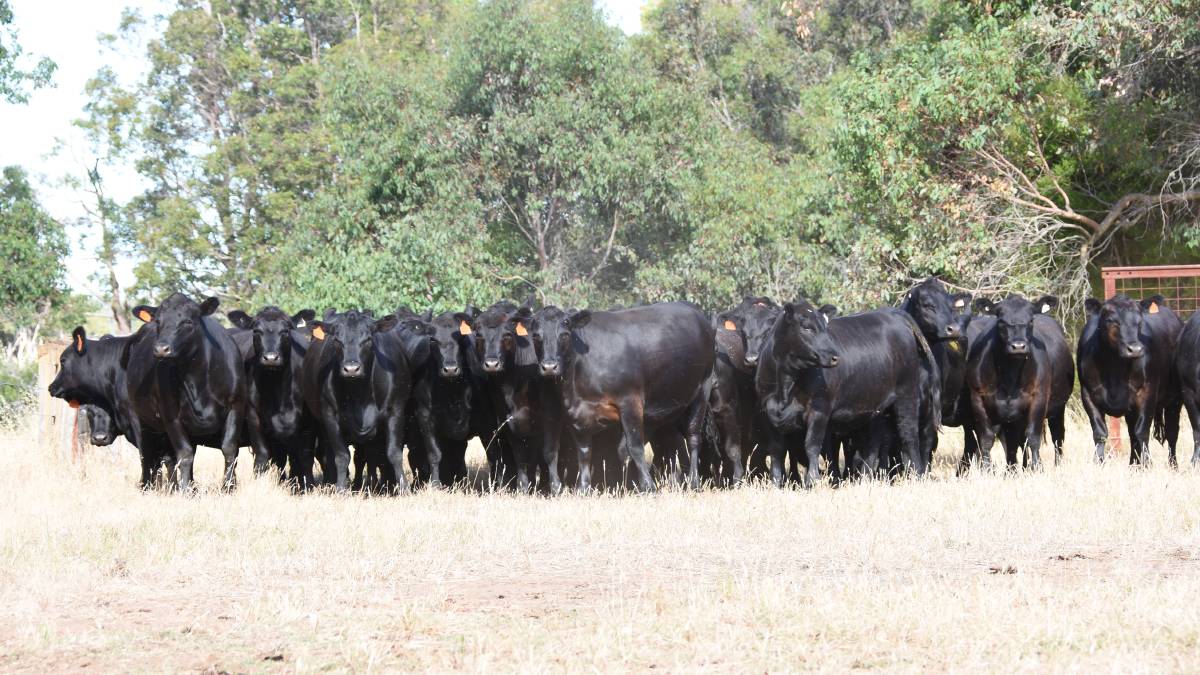 Regular sale vendors Mark and Peta-Jane Harris, Treeton Lake, Cowaramup and Dardanup, will also be among the larger vendors in the sale when they truck in 40 PTIC Angus heifers.

"The heifers on offer are looking really good after a good season..."

IF it is quality beef heifers you are looking for, then you will have the perfect opportunity to secure them at Boyanup when Elders holds its annual Special Beef Female Sale this month.

The sale at Boyanup on Friday, January 22, commencing at 11.30am will feature 383 PTIC heifers and 88 unjoined heifers that are sure to impress in terms of both their quality and breeding.

The line-up of PTIC heifers will comprise of 369 Angus and 14 Murray Greys, which have either been mated to Angus, Murray Grey or Limousin bulls.

In the unjoined line-up there will be 70 Angus and 18 Red Angus heifers.

All the females on offer in the sale have been inspected by Elders, South West livestock representatives Michael Carroll and Alex Roberts, so the quality on offer cannot be questioned.

Mr Carroll said the sale would again feature another first-class line-up of beef females put together by the Elders South West livestock team.

"The heifers on offer are looking really good after a good season and the vendors should be commended on their efforts in the presentation of the heifers," Mr Carroll said.

"Not only will buyers be able to purchase with extreme confidence in regards to quality of the heifers but also their pregnancy and health status.

"All the mated heifers on offer have been pregnancy tested in calf and have a vendor guaranteed maximum 12 weeks calving while the unjoined heifers have been vet checked suitable to breed and not detectable pregnant (NDP).

"Plus they have all also been ear-notch tested free from persistent infection (PI) of Pestivirus.

"All of these tests have been done since December 1 which means buyers can be assured they are buying only the best of quality.

"In addition to this some of the heifers in the sale have also been treated with Pestigard for immunisation against Bovine Pestivirus (BVDV) along with 7in1 and other animal health treatments. "I believe now is the opportune time to trade in your old cows that aren't quite up to scratch and upgrade with a PTIC heifer, given the current position of the cull cow and calf markets."

Leading the charge in terms of numbers in the PTIC section will be return vendors Howard and Helen Griffiths, HW Griffiths & Co, Ferguson Valley, with a line-up of 90 Angus heifers.

The 22-month-old heifers on offer were purchased in as weaners from reputable breeders both privately and at South West weaner sales last season and have been prepared and joined especially for this sale.

The classy, black beauties have all been mated back to Blackrock and Mordallup Angus bulls selected for their low birthweights, moderate growth and docility and have a six week calving from February 24 to April 8.

The line has been treated with 7in1 and Pestigard (in both March and April) plus they had Vitamin B12 and selenium treatment at the end of August as well as a Dectomax drench and Marksmin treatment at the beginning of December.

The heifers have also been pregnancy tested twice with their second test done on December 3.

The next biggest vendors in the PTIC pens will be Bruno and Annette Italiano, Sandalwood Farm, Benger, with 54 rising two-year-old Angus heifers from their breeding herd of 150 Angus breeders.

Regular sale vendors Mark and Peta-Jane Harris, Treeton Lake, Cowaramup and Dardanup, will also be among the larger vendors in the sale when they truck in 40 Angus heifers which were purchased in as weaners last season.

The heifers are based on Blackrock, New Generation and Callanish Angus bloodlines and are in calf to a Little Meadows Angus sire.

The bull used in the joining was selected for its low to medium birthweights and high growth rates. The heifers had their 7in1 annual booster, Beachport Liquid Minerals, a Dectomax drench and a Multimin treatment and prior to joining were ear-notch tested for BVDV and treated with Pestigard twice.

Fellow regular vendor Murray Tucker, MW Tucker, Tutanup, will again truck in a line of PTIC heifers for the sale which will consist of 37 Angus.

The quality line of heifers has been selected for both shape and quality as well as their quiet temperaments.

In terms of their joining details the heifers are PTIC to a Gandy Angus bull and are due to calve from February 20 to May 1 for 12 weeks.

The line was treated with Pestigard and Ultravac 7in1 and also received a Epricare drench in December.

C-Wise will be another vendor with more than 30 PTIC Angus heifers in the sale with its offering consisting of 32 shiny black heifers.

The line is in calf to Angus bulls from the WA College Agriculture, Harvey, and is due to calve from February 27 for eight weeks.

In terms of health treatments the heifers were treated with Ultravac 7in1, Pestigard and Multimin as well as CattleMax drench in April.

Another line with a shorter calving period will be 25 Angus from Caris Park Grazing Co, Pinjarra.

These heifers are carrying Angus sired calves and will calve for nine weeks from February 17 to April 18.

For those of you looking for Angus heifers which are not back in calf to Angus bulls then there are two bigger lines from Carbon Plus, Brunswick and AD & RM Corker, Kirup, which may suit as both are in calf to Limousin sires.

The heifers from the Corkers have been vaccinated with Pestigard.

All three lines are PTIC to Angus bulls.

Following the run of PTIC Angus heifers will be an equally impressive but considerably smaller offering of 14 PTIC Murray Grey heifers from two vendors.

Repeat sale vendors the Bagshaw family, Young Guns Murray Grey stud, Hyden, will be the largest of these vendors with 12 grey heifers.

The heifers on offer from the Bagshaw family's J-BAS 8 accredited operation are based on their own stud bloodlines and are back in calf to Young Guns Murray Grey bulls, which were selected for both their low birthweight and low maintenance traits.

The heifers have been treated with both 7in1 and Pestigard twice.

Kada Grazing Co, Mullalyup, will offer two Murray Grey heifers alongside three Angus which are all PTIC to Angus bulls and due to calve from March 29 for 11 weeks.

In the unjoined heifer section of the sale the return vendor Jim Fox, JS Fox, Pemberton, who has nominated 40 heifers, which are extremely quiet and well-bred.

The March-drop heifers are based on Mordallup and Gandy Angus bloodlines and no doubt like previous sales will be highly sought after.

They show great potential to grow into first-class breeders of the future and will be ready to mate this season.

The line was weaned in December and have received 5in1, selenium and cobalt as well as a Cydectin drench.

The MacLeay family, Blackrock Angus stud, Vasse, will again be vendors in the unjoined section with an offering of 30 heifers, which will be suitable for joining this season.

The classy black females, which show plenty of potential as future breeders, are all out of purebred stud cows and surplus to the operation's breeding requirements.

The March/April-drop calves were weaned in December and have had their 7in1 treatments for life (three times at six, seven and nine months old) along with an Eprinex drench at nine months old.

Rounding out the vendors in the unjoined section will be Biljedup Pty Ltd, Yelverton, with 18 Red Angus heifers, which are classy young heifers that are very quiet.

The line had a 7in1 and Multimin treatment in November as well as a Dectomax drench.