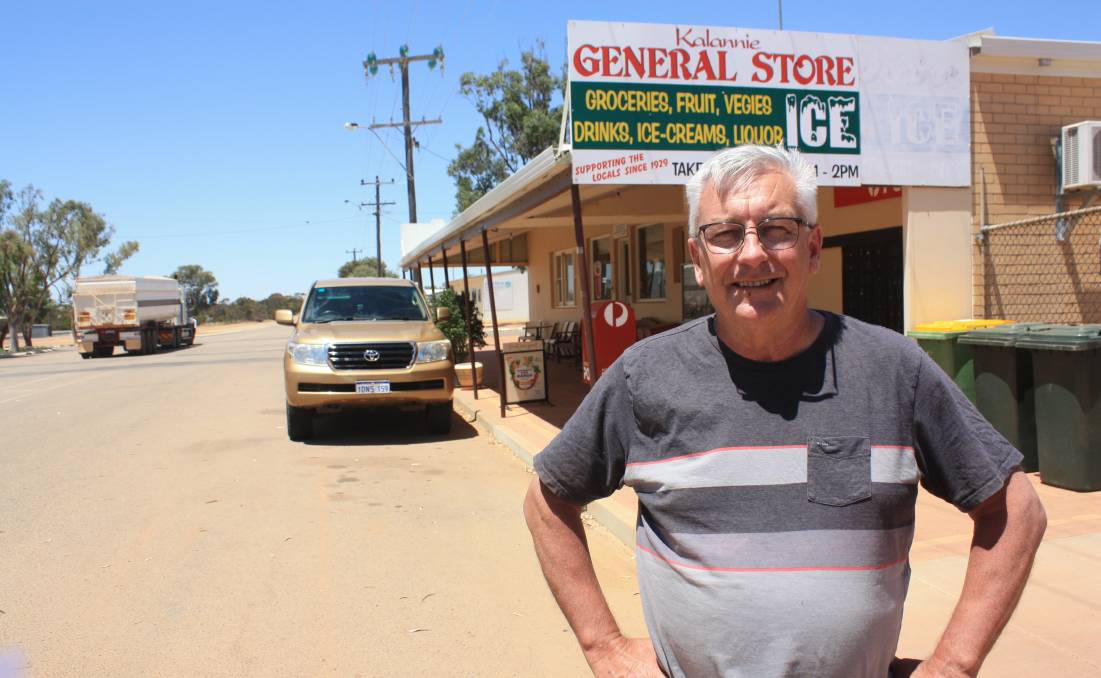 30 years ago, the most oft-quoted question about Kalannie was, 'Where is it?'

IT'S a truism that it takes a village to raise a child.

And it could be argued that it takes one enthusiastic person to raise a 'village'.

That seems to be the case when you talk to people in Kalannie, a go-ahead town gazetted in 1929.

Thirty years ago, the most oft-quoted question about Kalannie was, 'Where is it?'

These days its population of 184 people, including 44 families, is largely focused on a new question to entice visitors - 'It's only three and a half hours from Perth'.

And if you ask anybody about the town's positive 'vibe', you are quickly pointed to Garry Crossman, owner of the local store.

He's a focus of attention because he has plans to expand the store after buying local church grounds on which he will build an IGA Xpress store.

It is something he believes the town needs to consolidate its "vibrancy", built over the past 10 years.

"While a lot of towns are struggling, Kalannie has got better because of the efforts of a lot of people," Garry said. Hockey one ... it's all 'go' for the Kalannie Women's Hockey Club to re-start this year.

"Basically we didn't want the town to die so it became a matter of supporting all aspects of making a town work."

First and foremost were the sports clubs, which is the genesis of Garry's introduction to Kalannie.

Formerly from New South Wales, he has been in WA since 2010, having arrived in the State to manage the Dunsborough Tavern.

Two years later he made what many people would consider an inexplicable decision, to move from the sea-side town to the small town of Kalannie on the fringe of the Wheatbelt to run the local Kalannie Sporting and Recreation Club (KSRC).

"We saw the position was for a husband and wife team so my wife, Wilhelmina and I thought we'd have a crack," Garry said.

"It was just after harvest when we arrived in the town and things were barren and bleak and we did question why we had made the move." The Kalannie Football Club, home of the mighty Bulldogs, is thriving, thanks to efforts of enthusiastic locals.

The pair stayed 18 months and got the club going. before heading to the coast again, this time to the farmer-recommended Green Head.

"We set up a cafe and we were about six months into the business before a local farmer, Vic Dodd, rang me to tell me the club manager had left and could I help them out," Garry said.

"So we went back and stayed three years before I got a job in Dalwallinu working as a branch manager for Primaries."

But he well remembers a town meeting where "nobody put their hand up to be president of the "footy club" in 2015, chaired by Ian Stanley.

"I thought that if the footy club went it would have a big impact on the community so I put my hand up for the job," Garry said.

"Winter sports contributes a hefty amount financially to the KSRC and allows it to employ a full- time manager and footy under pins winter sports so it was a no brainier really.

"The footy club does an annual wheat drive, where farmers donate wheat and trucks for the club to pick up and sell, which enable us to continue fielding a team and like all country clubs we rely on Perth-based players who are contracted. The Kalannie Bulldogs won the competition in 2016, with the grand final played in Kalannie

The next problem was increasing attendance at footy games.

"It was like a morgue going to games with everybody sitting in their cars watching and it was evident to me we needed a supporter's club and a bar to create a bit of ambience that encouraged people to be together," Garry said.

"We needed nice facilities so we worked with the shire and made it happen, raising funds to build a shed over a sea container which became the bar.

"Nobody stays in their car these days."

The other problem was promoting local players rather than 'buying-in' players.

"When I took over as president we had three locals playing for our mighty Bulldogs," Garry said.

"We put the word out and chased up guys and by pre-season we had 13 coming to training.

"It doesn't work out like that every year, but we tend to shake the local tree first, then head to Perth.

"A lot of Perth-based players are former locals who live in Perth for work or go to university.

"We now go to Perth every November, ring the lads and they may bring a mate and we buy them tucker and a beer at a local pub and talk to them about our culture and the social aspects of our town.

"It's a recruitment drive but it's all about becoming mates and we find a lot of guys want to come back and play the next year because it's such a great experience. Funds were put aside for a children's playground built next to the 'supporters' club'.

"It's true the Perth lads get paid, but really its less than what they could earn if they did a full day's work, which is the commitment they make in playing for us.

"They steam out of Perth at 9am every Saturday during winter.

"Some guys have been playing for us between five and 11 years, and while we generally field a competitive team, it's the culture that brings them back; it's important they are a part of our community.

"Now we have younger guys coming onto the committee and they all play and it has really becomes a succession plan."

This year because of COVID-19 there was no competition, but the club kept going with 'COVID-safe' socials.

According to Garry the wheat drives have become an annual fund-raiser and once funds are allocated to the winter sports teams, any spare monies are spent in the community.

"It's a great community effort and even in a bad year like 2017 when things were really tough, we carted 150 tonnes of wheat to the local bin.

"I couldn't believe it and we still had our annual barbecue to keep spirits up.

"With the surplus funds we support the community, donating to bodies like the local bowls club, St John Ambulance, fire brigade, golf club, KSRC, etc, to keep them vibrant, rather than seeing anyone struggle.

"It's now got to the stage where the community has ownership over its future and the town has definitely re-grouped.

"We've got several local businesses that are employing nearly 100 people, school numbers are vibrant and there are plans to start up a women's hockey club again, which had stopped when I got here."

Gary on the church site he bought from The Brethren which is to be transformed into a shopping and social hub precinct.

And now the 'heartbeat' of the town, the general store, is pumping up.

"We're more a convenience store and while we're well supported, we needed a wider range of product that will enable people to have the convenience of coming into town for a bigger supermarket-type shop rather than going elsewhere.

"I'm planning a 400 square metre store and because I wanted buying power, I came to an agreement with IGA to run an Express Store.

"We'll also have our own bottle shop, post office and a cafe that will bake fresh daily bread and pastries with mandatory coffee all under the one roof and an alfresco area.

"It will be the town's first supermarket and I expect it will quickly become a social hub during the day time without affecting the Sportsman's Club which is open Thursdays to Sundays, predominately in the evenings."

To add a community touch, the cafe will be called Naomi's Kitchen, in recognition of local cook Naomi Smith, nee Melbin.

And just a reminder to the 'Bulldogs' boys in the headers and chase tractors, pre-season has already started.

Garry hasn't set an official opening for the supermarket but it might be a wise move to have it on a Monday to give 'sports participants' a chance to recover for the following weekend's program of sports events.