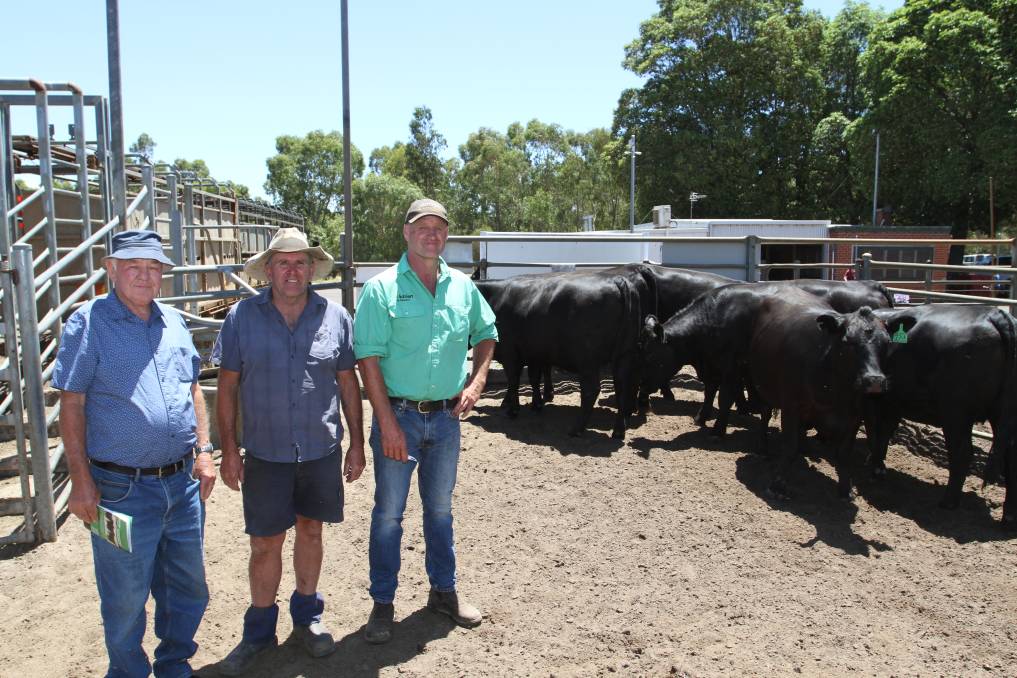 Competition from the 52 registered buyers climbed

The Nutrien Livestock South West team catalogued an outstanding lineup of 451 BVDV tested free and vendor guaranteed PTIC beef heifers which was widely described from agents and buyers alike as the most even quality seen at the sale.

Buoyed by an unprecedented beef cattle market, competition from the 52 registered buyers packing the stands climbed with the mercury to secure a red hot result for the sale's vendors.

And strongly supported by the Nutrien Livestock network, auctioneer Chris Waddingham cleared 439 PTIC Angus, Murray Grey and Red Angus heifers (97 per cent) at auction for an average of $2946.

An indication of the strength of the sale was this year's overall average climbing by $1033 and even eclipsed the $2700 top price at last year's sale.

Angus heifers dominated the numbers making up 72pc of the catalogue and also proved to be the breed of choice with all bar one line of the 326 heifers selling at auction to top the average stakes at $3053.

Annual sale vendor GW & J Oliver, Kirup, got the sale off to a flyer selling the first of two $4100 national record top prices for commercial mated Angus heifers recorded by two separate vendors at the sale.

The line of six sleek, well-bred and grown heifers were syncro AI mated to Millah Murrah Lakeside and due to calve from March 1 to April 27 and were purchased by Noel Holdsworth, ND & BJ Holdsworth, Bridgetown.

Vendor Graeme Oliver said he purchased the Lawsons Angus bred heifers on-farm from JS & EN Bagshaw, Boyup Brook, at 10-months of age and joined and specially prepared the heifers for this sale.

While the benchmark was set from the outset, it took another 15 pens of heifers to go through the ring before original sale vendors the Harris family, Treeton Lake, Cowaramup, set the other $4100 record top price with seven classy deep bodied heifers from their volume team of 61 heifers. 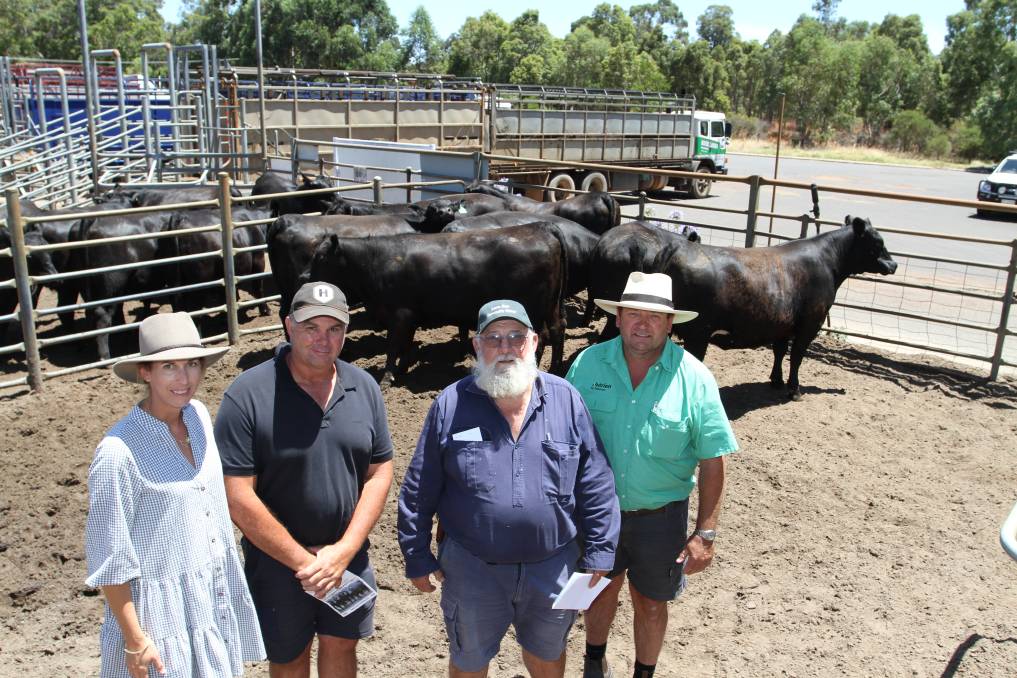 The owner-bred heifers based on Cherylton, Black Market and Coonamble bloodlines are due to calve from March 1 to May 12 to Cherylton and Black Market bulls and were purchased by George Nicolaou, G & K Nicolaou & Son, Manjimup.

With an account of eight pens totalling 58 Angus heifers, Whild Avos Pty Ltd, Manjimup, was the sale's most dominant buyer.

They opened their account with the sale's $4000 second top-price bid for seven syncro mated sisters of the record top-price getters with the same breeding and mating details offered by the Oliver family.

Whild Avos paid from $2900 to $3800 for the balance of their purchases with their next highest price paid for Treeton Lake's opening draft of six heifers of the same description previously mentioned.

DR & DJ Roche Family Trust, Pemberton, claimed the first two pens of Angus heifers offered by another of the bigger original sale vendors E & C Russell, Bridgetown, paying $3200 and $3600 for two pens of eight owner-bred heifers bred by and due to calve to Mordallup and Monterey bulls from February 26 to April 30.

The owner-bred heifers were bred on Monterey and Mordallup bloodlines and were due to calve to a Black Market Angus bull from February 22 to May 3.

Regular vendors LT Toovey, Cranbrook, offered 52 May to June 2019-drop Angus heifers bred on the family's own Boyacup bloodlines with Whild Avos paying their $3300 top price for a pen of eight due to calve to Boyacup bulls from February 24 to April 25.

Other bigger numbers of Angus heifers purchased at the sale included EB & G Quick, Donnybrook, with four pens at auction and the one overlooked pen following the sale while Nutrien Livestock, Margaret River agent Jock Embry sourced three pens for a client.

The sale then swung to the Murray Grey lineup with Scott River Trading claiming the breed's $3100 top-price honours with seven Monterey bred heifers due to calve to Monterey bulls from February 22 to May 3.

GR & J Buller, Karridale, offered 34 Murray Grey owner-bred heifers at the sale bred by and in calf to their own Monterey bulls due to calve from March 10 to June 5.

Mr Abbs sourced all five lines of the Buller family's heifers for a couple of client orders paying from $2500 to $2700.

Wulura Farms Pty Ltd, Yallingup Siding, presented a total of 41 owner-bred Murray Grey heifers at the sale with Margaret River agent Jock Embry collecting four pens for a few client orders and paid the vendor's $2700 top price for a line of seven Monterey and Southend bred heifers due to calve from March 10 to May 15 to Monterey and Melaleuca bulls.

The Willandra and Magic Valley bred heifers are due to calve to Willandra Red Angus bulls from February 20 to April 20. 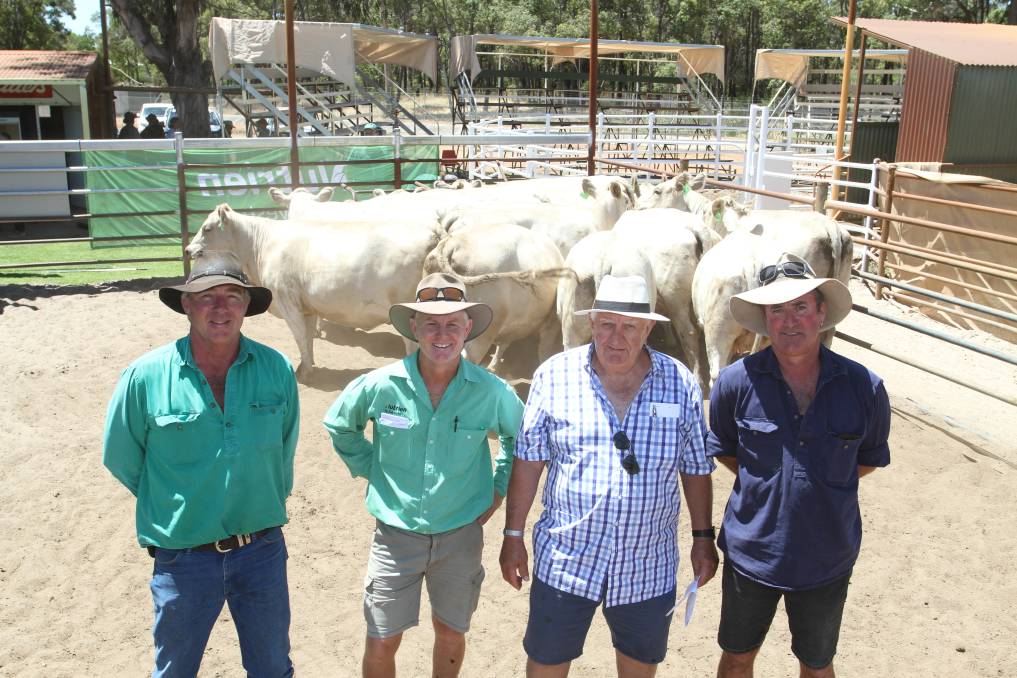 "Our vendors received great prices for their heifers and our buyers were presented with outstanding quality," he said.

"The enquiry was strong throughout the catalogue, and it was really pleasing to see so many repeat buyers operating on the livestock they have previously purchased.

"Obviously to obtain a national record for commercial females was exciting but so too was the near total clearance."